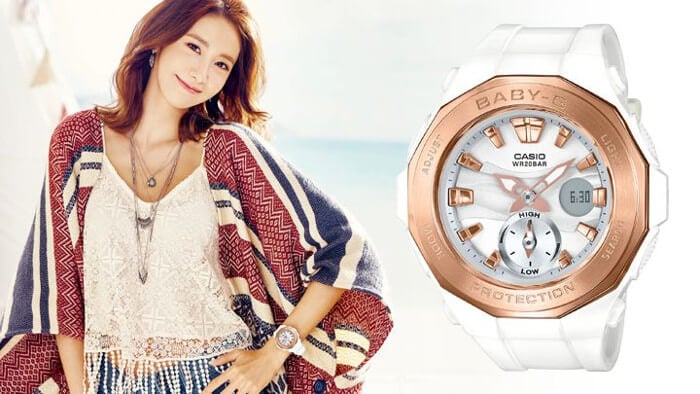 The Casio Baby-G sport watch lineup offers the same toughness and shock resistance of a G-Shock with a smaller form factor and fashionable designs for women. Baby-G watches are water-resistant to at least 100 meters with some models water-resistant to 200 meters. They also have useful features like world time, alarms, stopwatch, countdown timer, and more. As Baby-G watches are offered in such a wide variety of colors, we are choosing the best base models here and will leave the color selection up to you. Here are our top Baby-G models.

Though it is part of the G-Shock Women line in the U.S., in Asia the G-MS MSGS200 Series is still part of the Baby-G brand. What differentiates the G-MS series from other Baby-G watches is that it does not have any Baby-G branding on the watch, just Casio and G-MS logos. The MSGS200 series reintroduces solar power to Baby-G, a feature that has long been missing in Baby-G watches outside of Japan until now. The slimline design of the stainless steel MSGS200G-7A is refined and elegant with a look that is appropriate for both work and social settings. The MSGS200G-7A features full shock resistance and 100-meter water resistance. The MSGS200 series is also available in other colors as well as a pricier all-metal version with a stainless steel band. 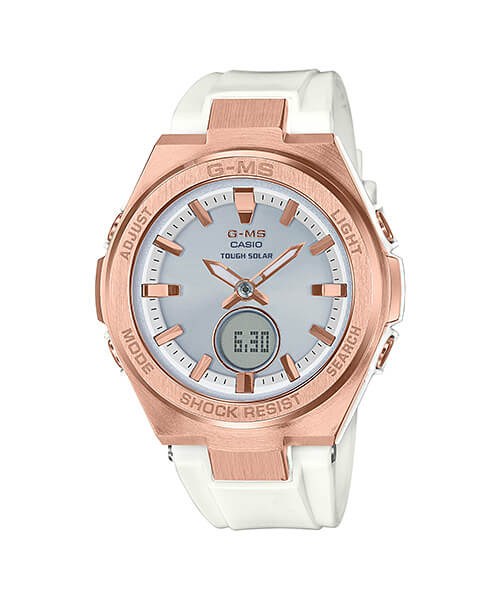 The Baby-G BA110 is based on the best-selling G-Shock GA-110 series. This analog-digital model has 100-meter water resistance, LED backlight, world time (48 cities + UTC), 1/100 second stopwatch, countdown timer (24 hours), and 5 daily alarms. Those who like the shape of this case should also look into the new BA125. 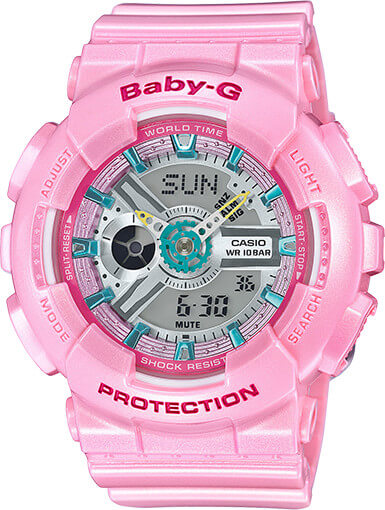 The Baby-G BGA220 adds a touch of luxury with its metallic bezel and shiny markers. This Beach Glamping series is designed for ocean lovers and has a tide graph subdial, moon data, and digital thermometer sensor. It is the first analog-digital combination Baby-G watch with 200-meter water resistance, making this classy-looking Baby-G watch one of the toughest. It also has an LED backlight with afterglow, world time (48 cities + UTC), daily alarm, 1/100 second stopwatch, countdown timer (60 minutes), and a wave counter (that keeps track of a count up to 999). 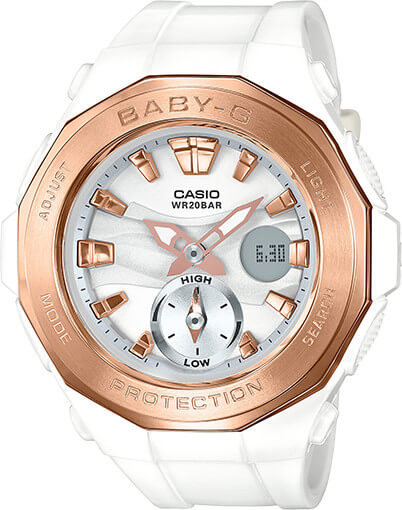 The Baby-G BGA210 appears to have more of a tough G-Shock look than the usual Baby-G watch. It has a simple but sporty design that would go well with athletic outfits. The addition of an analog subdial offers dual dial world time. The BGA210 features 100-meter water resistance, LED light, world time (48 cities + UTC), 1/1 second stop watch, countdown timer (60 minutes), and daily alarm. 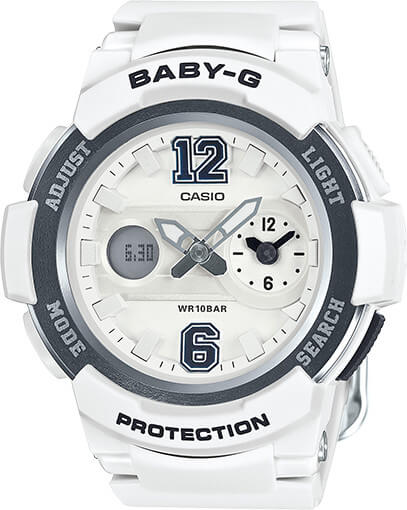 The Baby-G BGD501 is based on the first-ever G-Shock model from 1983. This model includes a metal face protector. With its 200-meter water resistance and thin profile, the BGD501 is an excellent choice for watersports or for those who just want a smaller watch. The BGD501 also has an EL backlight with afterglow, world time (48 cities + UTC), 5 daily alarms with 1 snooze alarm, 1/100 second stopwatch, and countdown timer (24 hours). 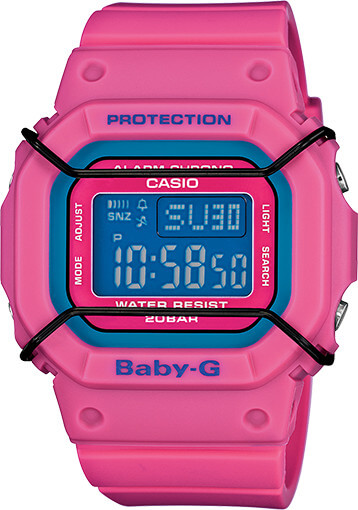 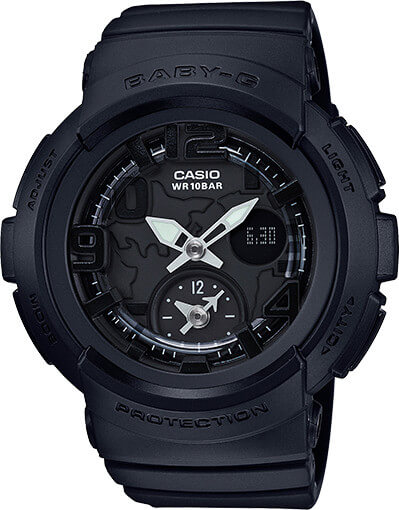 The Baby-G BG169 is one of the most popular models and a favorite of surfers. This model has a reinforced face guard for protection against the harshest impacts. Despite its many features the sporty BG169 is one of the more affordable Baby-G watches. It has 200-meter water resistance, EL backlight with afterglow, 25 set databank with 8 characters and 12 numbers per set), world time (30 cities), day counter (countdown to target date, 5 records), 5 daily alarms, 1/100 second stopwatch, and countdown timer (24 hours). 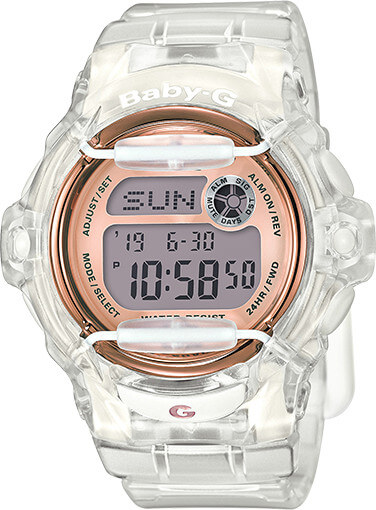 The Baby-G BGA131 is a simple and cute analog-digital watch with stylized markers with a heart shape at the 2-position. This model has a special “Neon Illuminator” LED light with afterglow. It also has 100-meter water resistance, world time (27 cities), 4 daily alarms with 1 snooze alarm, 1/1 second stopwatch, and countdown timer (60 minutes). 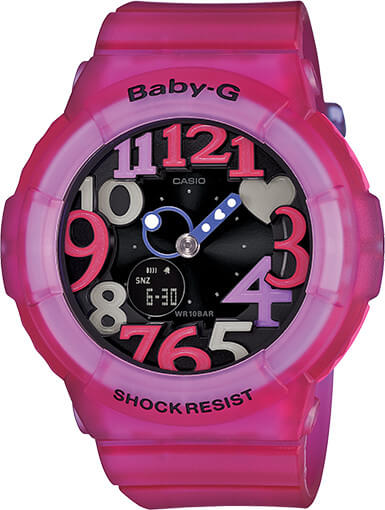 The Baby-G BGA185 is designed for runners with direct access to the timer from timekeeping mode, an easy to view digital subdisplay, and high-contrast analog hands. This model is available in colors that match athletic wear, and also has a reflective material on the strap keeper. The BGA185 has 100-meter water resistance, led backlight with afterglow, world time (48 cities + UTC), 5 daily alarms, 1/100 second stopwatch, countdown timer (24 hours), and counter (that keeps track of a count up to 999). 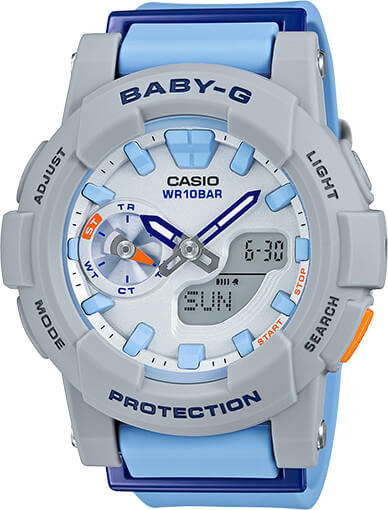 The BGA110 is a sturdy yet classy-looking analog-digital model featuring “Chaton” style bezel protectors. It is available in a simple white and silver design or black and silver. It has 100-meter water resistance, LED light with afterglow, world time (48 cities), 5 daily alarms, 1/100 second stopwatch, and countdown timer (24 hours). 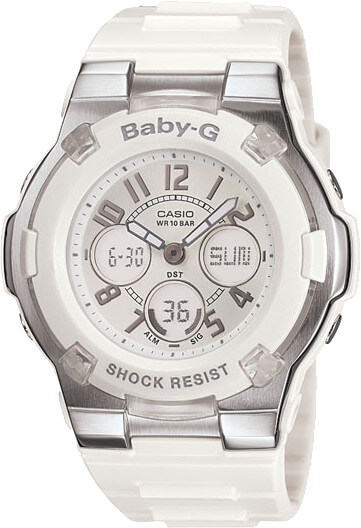 For those who prefer a simple G-Shock-like look, the Baby-G BG6903 may be the answer. The BG6903 is based on the best-selling G-Shock DW-6900 with a round all-digital design and an easy-access front EL backlight button. The BG6903 has 200-meter water resistance, dual time, 2 alarms with 1 snooze alarm, 1/100 second stopwatch, and countdown timer (24 hours). The BG6903 also has the best battery life of any Baby-G model with an estimated 7-year lifespan. It is also a good choice for runners with its 60 lap stopwatch memory. 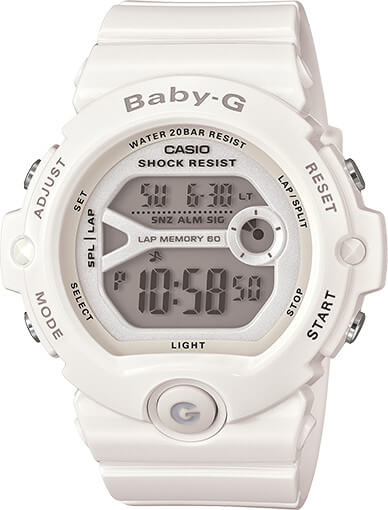