There are a number of G-shock watches that Casio produces for sale only to the Japanese domestic market (JDM). Some of these are upgraded or specialized versions of common G-Shock models. This list of Japan-only G-Shocks focuses on the 5000-series models. Current models that are part of the 5000-series include the common DW-5600 and the GW-M5610 models. Other 5000-series models that are less well-known but recognizable to G-Shock enthusiasts include the DW-D5500, GW-5500, and the highly regarded origin model GW-5000. The 5000-series is the most historically significant G-Shock line, as it descends directly from the original G-Shock from 1983, the DW-5000C.

In the past, the only way to buy the JDM G-Shock models was through personal contacts in Japan, but now, thanks to the proliferation of e-commerce, they are easily obtainable. You will have to pay a premium for these imports, but their uniqueness makes up for it. They are also excellent items for visitors to Japan who want to bring back a special memento. Here are the Japanese import G-shock 5000-series watches that we suggest looking into.

Many people who fall in love with G-Shock and start building a collection of watches will eventually start thinking about getting the GW-5000, sometimes to the point of obsession. Others who are new to G-Shock may want a premium watch with a classic design that is a step above the average model. The GW-5000 is a simple watch with a case that is based on the first G-Shock ever. Like the early G-Shock models, it has a screw-lock case back and is one of the only current G-Shocks, along with the digital Frogman and GMW-B5000, that has this feature. It adds modern features like Tough Solar power and Multi-Band 6 radio time-syncing. While its look is intentionally basic, it is considered a “prestige” G-Shock because of its higher price and made-in-Japan status. In addition to its screw-back with a diamond-like carbon (DLC) coating, it has a full stainless steel inner case under the bezel, while standard 5600 models have a resin case. It also has a nicer overall finish than a typical 5600 model, with a softer and more comfortable urethane band. While it won’t buy you instant status with the general public, owning the GW-5000 is a great way to express your appreciation of G-Shock and its history, in addition to having a great watch. For watch enthusiasts who must own at least one G-Shock, it is the natural choice. 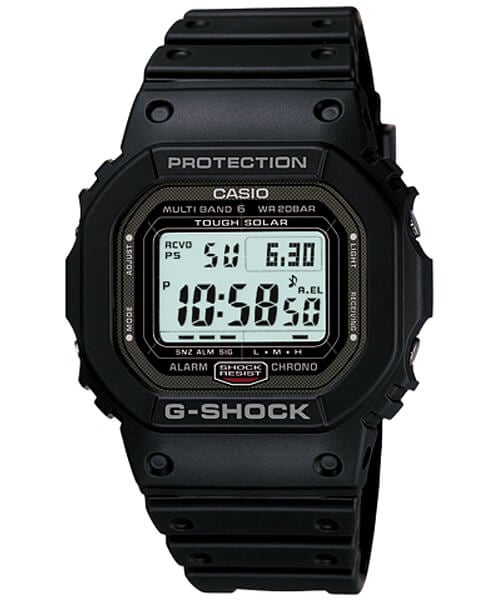 The GW-M5610BB-1JF is a basic black Tough Solar/Multi-Band 6 model with a glossy black finish and a stealthy reverse LCD display. The display borders have a clean look without the usual labels and allow the solar panels to stand out as part of the minimalist design. This combination of a glossy exterior with a minimalist display gives the GW-M5610BB-1JF a unique style and a sleeker, more sophisticated look than the usual 5600.

Update: Amazon actually sells this model directly, check to see that it says “Ships from and sold by Amazon.com.” 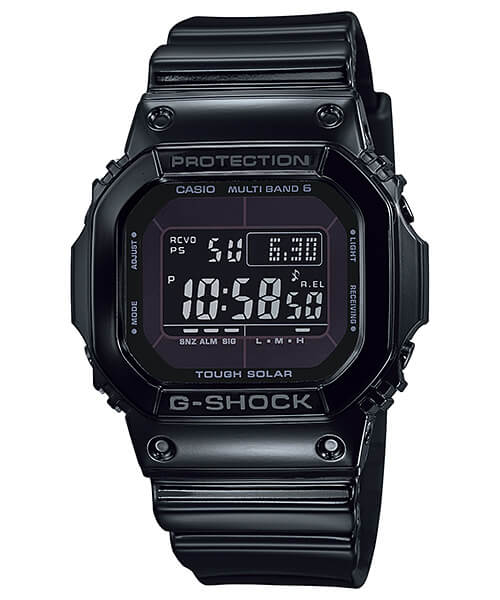 For the man in uniform: GW-M5610BC-1JF Composite Band G-Shock

The GW-M5610BC-1JF is a solar and Multi-Band-6-powered GW-M5610 with a composite metal-resin band with a traditional folding clasp. Its low profile would go well with uniforms while its composite band and reverse display gives it a tough, no-nonsense look. The metal part of the band is treated with a black ion plating. This Japanese model is suggested for those who are concerned that a traditional resin band may not be durable enough over the long haul, or for those who want to be able to put on and remove the watch quicker than a resin band allows. Another good use for this watch is to swap out the composite band with the GW-5000. If you like the reverse display but would rather have a traditional resin band, there is also the GW-M5610-1BJF (amazon). 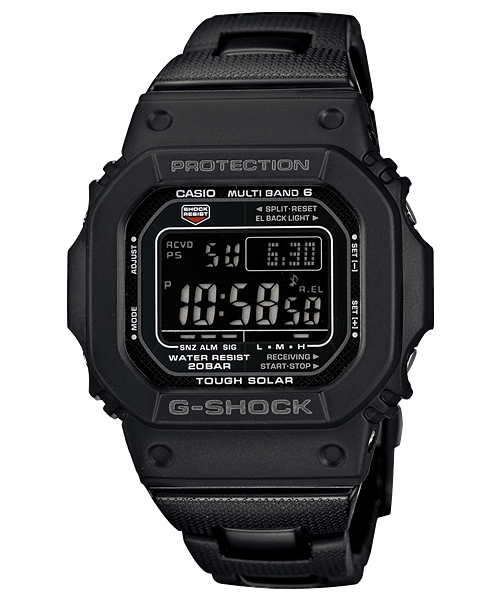 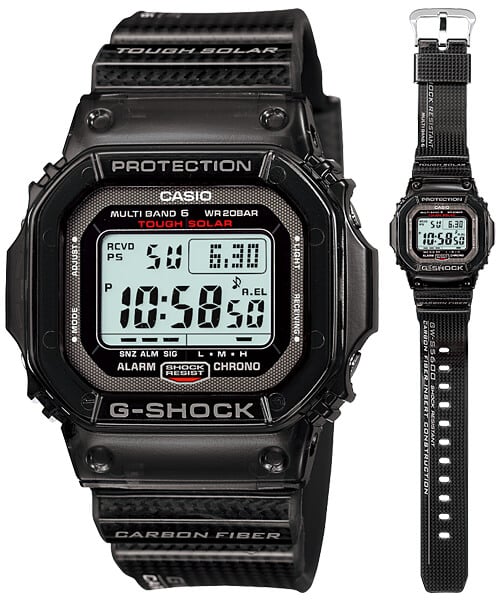 The GW-5510-1BJF is basically a DW-D5500 (amazon) but with Tough Solar, Multi-Band 6, stealth lettering, and a reverse display. It is also available in black with a standard display (GW-5510-1JF) and a white version (see Amazon link). The 5510 case, with its covered buttons, is a descendant of the 1985 DW-5500C, which was also known as “G-Shock II” and was the first model to be nicknamed the “Mudman” for its mud and dust resistance. The 5500 is not a commonly seen G-Shock on the street and those who like its retro-futuristic look would be wise to upgrade to this maintenance-free Japanese version. 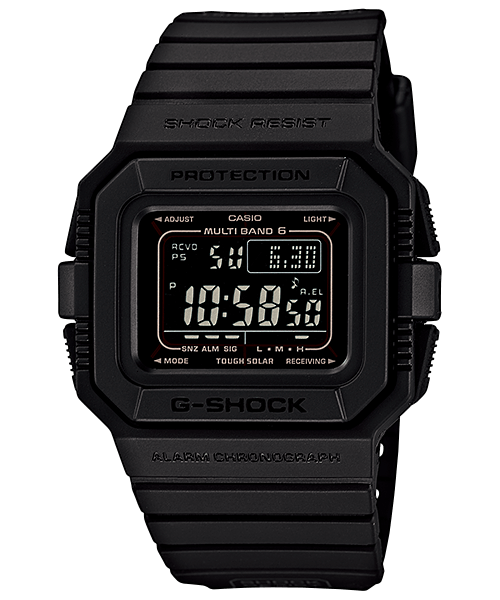 It’s not technically a 5000 series G-Shock, but the GXW-56 series is considered to be part of the “square” family and is clearly based on the 5600 body. It can be described simply as an over-sized and extreme version of the 5600. Available internationally as the GX-56, the Japanese version is the GXW-56, which adds Multi-Band 6. This extra large watch measures 55.5 x 53.6 x 17.5 millimeters and is nicknamed “The King” by G-Shock fans. It’s extra-large size gives it even more protection than a typical G-Shock, and it is very likely one of the toughest G-Shock models ever made. Its protected button design also offers mud and dust resistance. Those who are hesitant to wear a large watch should stay away. For those who want one of the largest all-digital G-Shock watches the GXW-56 is a dream come true. The GXW-56-1BJF pictured here has light yellow lettering and a standard LCD display. It is also available as the GXW-56-1AJF with a red-accented face, red buttons, and reverse display. 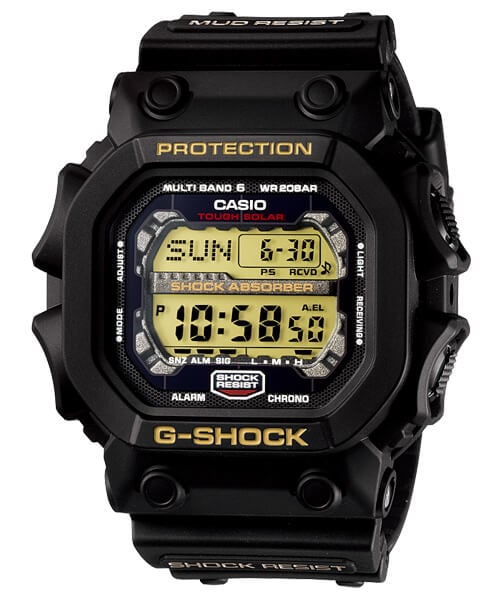 For the surfer or fisherman: GWX-5600C-7JF Solar Tide G-Shock

The GWX-5600 G-Lide is like the GLX-5600 with its tide and moon graph, with the added features of Tough Solar and Multi-Band 6. This makes it a top choice for surfers who want an unobtrusive, low profile tide watch that is solar powered and has automatic time calibration. The watch comes in white (GWX-5600C-7JF), red (GWX-5600C-4JF) and black (GWX-5600-1JF). These models were previously available internationally and are still active models in Japan. 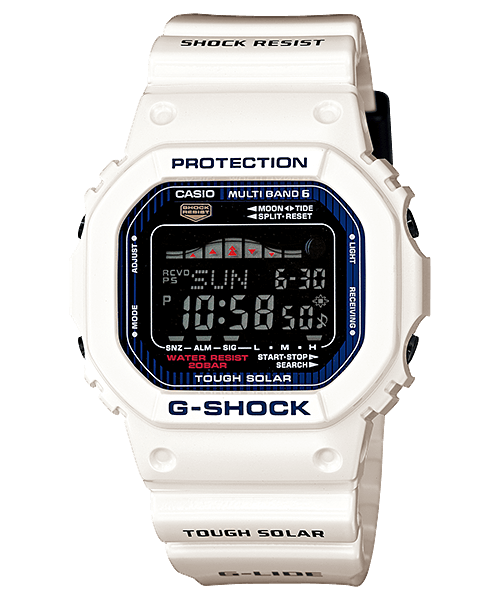 Where To Buy G-Shock Watches In Tokyo Japan

G-Shock watches are also available at many other stores including BIC CAMERA.