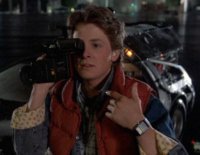 Along with the calculators and digital watches that preceded it, the Casio calculator watch helped to firmly establish Casio into the world’s collective consciousness. With the rise of the calculator watch, Casio wasn’t just one of the top technology brands in the world, but also one of the coolest. Products like the calculator watches, G-Shock tough watches, and musical keyboards made Casio a beloved brand to Generation X along with other innovative companies like Apple and Nintendo. Its great success and visibility in the 1980s would forever cement Casio’s image as a maker of retro-cool products. Casio continues to innovate with new products and technology but always finds a way to pay tribute to that era.

Casio wasn’t the fist company to make a calculator watch, but it was certainly the most successful and prolific. What is generally considered to be Casio’s first calculator watch, the C-80, arrived in 1980 (along with other variants like the C-801, C-70, C-701, and C-60). The Casio calculator watch became an icon of the 80s and was a must-have accessory for young men and boys. The Casio Databank CD-40 arrived in 1983 and was essentially the world’s first smartwatch. The CA-50‘s appearance in the blockbuster movie Back To The Future was a testament to the calculator watch’s widespread popularity. Even Sting wore one! Despite the emergence of smartphones, the calculator watch is still here, and Casio still produces a nice variety of them.
All the following watches feature an 8-digit calculator.

The CA-53W-1 is similar to Marty McFly’s CA-50 watch from Back To The Future and is the most popular calculator watch. It was first released in 1984 thus making it the most retro of all the current calculator watches. This watch has dual time, daily alarm, stopwatch, hourly time signal, auto calendar, and 5-year battery. This is the smallest Casio calculator watch and measures 42.0 x 33.0 x 7.0mm. This watch is water resistant with no depth rating, meaning it can handle getting splashed lightly but should be kept out of the shower and should not be immersed at all. Due to its extremely low price, smaller size, and water resistance, this a good option for kids. The CA-53W-1 is one of the best-selling Casio watches and has its own Facebook fan page. 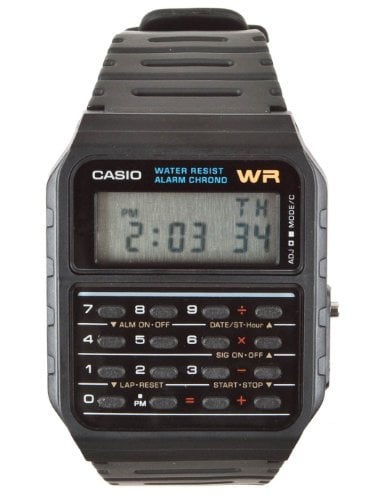 The CA-56-1 is the sportiest model, with 50-meter water resistance, allowing one to go swimming with it (but not diving). Other features include daily alarm, stopwatch, auto calendar, dual time, and 5-year battery. Size is 44.9 x 34.8 x 10.6mm. This is the best water resistance available for a Casio calculator watch. 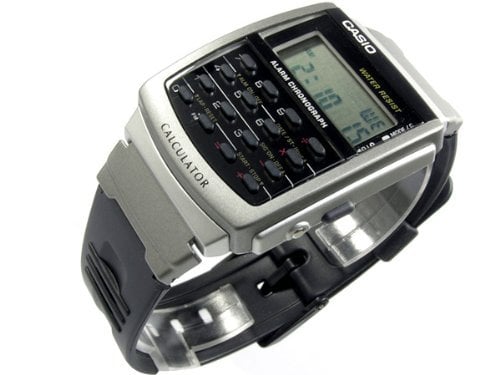 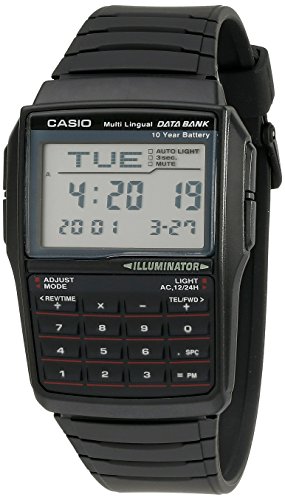 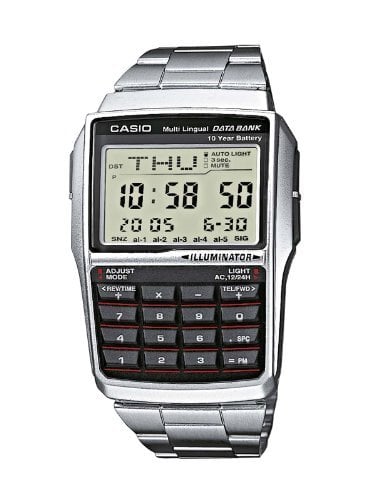 The DBC-611 is the classiest of the Casio calculator watches while still retaining its retro appeal. This watch wouldn’t look out of place with office attire. Features include auto LED light, 25 page Databank (8 letters and 12 numbers), second time zone, stopwatch, 4 alarms and 1 snooze alarm, multi-language display, auto calendar, 12/24 hour formats, and 3-year battery. Size is 46.5 x 33.1 x 8.7mm. This model is available as the silver DBC-611-1D and gold DBC-611G-1D. It has a stainless steel band but it is not the folding clasp type like the DBC-32D-1A above. 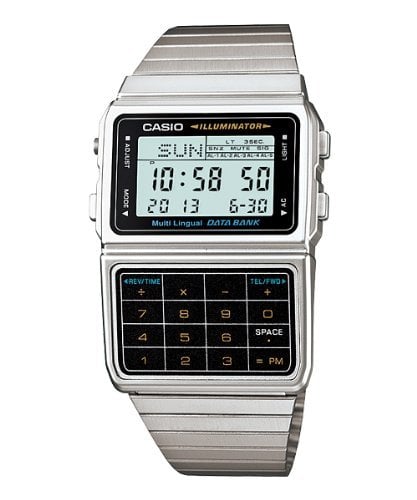 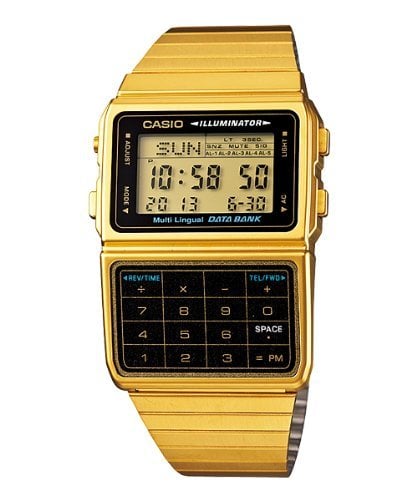