Update: The WatchGecko article has since been updated and edited after we published this, with the factually incorrect portions removed.

The WatchGecko claim is borderline idiotic, but some people appear to be falling for it. 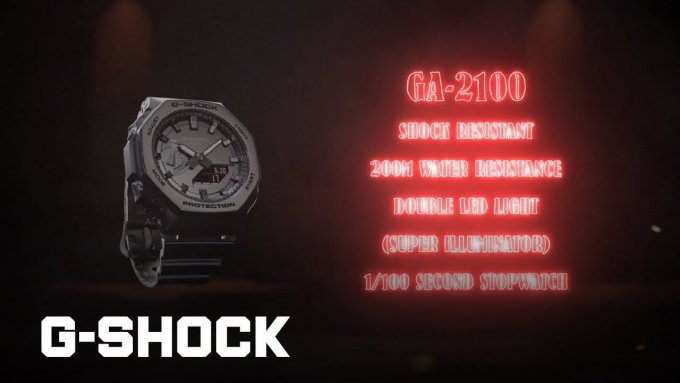 Yes, the GA-2100 is a real G-Shock and has full shock resistance.

We normally don’t want to give exposure to negative clickbait articles, but we feel the need to address “The CasiOak isn’t a real G-Shock” at WatchGecko, as it is seen by a lot of people and is very misleading. Those who are not familiar with G-Shock and read the article may be left believing that the GA-2100 is an inferior G-Shock, which is certainly not the case.

At first, the article is an informative introduction to the GA-2100 with great photos. No problem there, but then the article takes a left turn to fulfill the promise of the clickbait title and states, “And here we discover a major glitch – these new watches do not appear to meet that technical expectation.”

The author goes on to quote a part of the manual for Module 5611 in the following way, “Your watch is designed to withstand impact occurred during normal daily use and during light activity such as playing catch (!!)… [sic]. Dropping your watch can lead to malfunction.” He then says, as if he has found the smoking gun, “There then follows a disclaimer that nowhere on these watches does the famous Shock-Resist shield appear and hence they and [sic] cannot be treated as G-Shocks. The only conclusion is that these new watches are G-Shocks in name only.”

We could not find any sort of disclaimer about the Shock Resist shield in the manual, and it seems like the author either made that up, remembered it incorrectly, or completely misinterpreted it. Such a disclaimer simply does not exist as far as we are aware of, and we don’t believe that a G-Shock needs to have the Shock Resist shield or label on the watch in order to have shock resistance and be considered a real G-Shock. The complete and unedited section of the manual that the author quoted and is referring to states the following:

“Your watch is designed to withstand impact incurred during normal daily use and during light activity such as playing catch, tennis, etc. Dropping the watch or otherwise subjecting it to strong impact, however, can lead to malfunction. Note that watches with shock-resistant designs (G-SHOCK, BABY-G, G-MS) can be worn while operating a chain saw or engaging in other activities that generate strong vibration, or while engaging in strenuous sports activities (motocross, etc.)”

This general statement is used in most Casio manuals, including those for non-G-Shock watches. The first sentence is not referring to the GA-2100 or any G-Shock for that matter. We should also remember that the manual is technically for the module. The watch’s shock resistance and water resistance are not listed in the specifications in the manual, because the manual is only covering the operation of the module and not the entire structure of the watch. The author ignored the second part about G-Shock watches (or perhaps misread or misinterpreted it, thinking that only watches with a Shock Resist label on it can be considered fully shock-resistant and thus a “real” G-Shock, for some reason).

The second part basically negates the first part when it comes to G-Shock watches, and that first part was the foundation of his argument. The author is using a part of the manual that is referring to non-G-Shock watches along with an ill-founded belief about the Shock Resist label to conclude that the GA-2100 is not a real G-Shock. That is so ridiculous and such a stretch that we are somewhat annoyed that we have to address it. Some other G-Shocks that do not have a Shock Resist label on the watch (including the case back) include the GA-2000, GA-2200, GST-B300, and GWG-2000, yet they are all shock-resistant. The GWG-2000 manual, like all Casio watch manuals, also has the same general warning about impact.

If you accept WatchGecko’s faulty reasoning, then the G-Shock Mudmaster GWG-2000 is not a real G-Shock either. 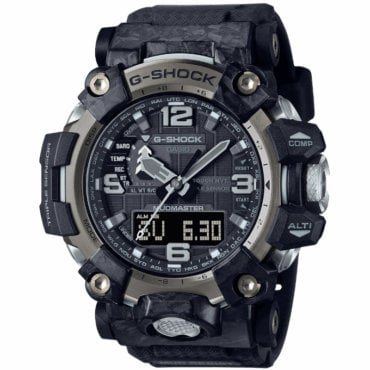 If Casio says a watch is a G-Shock, then it is a G-Shock. All G-Shock models are rigorously tested during the development phase. Did the author conduct or cite any durability tests to show that the GA-2100 is inferior to other models? Did he find evidence of people having widespread problems or complaints with the GA-2100? No, because that never happened. The author apparently didn’t see Watch Geek’s GA-2100 shock test video, which clearly shows that the watch can withstand heavy impacts. The GA-2100 is actually technically stronger than a modern day DW-5600 due to its carbon fiber-reinforced interior case.

G-Shock has designated the GA-2100 series as one its four standard classics, which are basically considered to be the foundation of the brand. It is just silly to think that Casio would purposefully compromise a G-Shock’s durability for any reason. The G-Shock reputation and its adherence to its high technical standards are what makes it one of the strongest and most trusted brands in the world. And let’s not forget that G-Shock was doing fine before the GA-2100 came along. The Carbon Core Guard era of slimmer watches was already in full swing. The GA-2100 was heavily influenced by the design of the original DW-5000 and is akin to an analog-digital version of that model, so there’s really no good reason to think that the GA-2100 is some sort of compromise.

The WatchGecko article questions the integrity of Casio and G-Shock when it lacks any real evidence to do so. It is potentially defamatory, but we have faith that most people who read the article will be sensible enough to see it for what it is. While there are many commenters criticizing the article, there are some who clearly believe it, which is why we decided to address this. The issue is not that the article is critical of Casio and G-Shock. The issue is that the claim is false and misleading and some people are not able to see that. It’s not because such people are stupid, but because they are less familiar with G-Shock’s standards and are trusting the author not to spread lies.

The author professes to be a G-Shock enthusiast and purist, so it’s puzzling how he came to his conclusion. Perhaps it is similar to what we’ve seen in forums where a purist longs for the old days and does not like the direction of the new lineup. He feels like the watches are not living up to his expectations or desires, so he constantly vilifies Casio and G-Shock and claims they have lost their way. It is more of an emotional response than a reasoned one. We got the impression that the author was bothered by the popularity and trendy status of the GA-2100 and wanted to find any reason to trash it. There is nothing wrong with being a purist, but it is wrong to be a self-righteous and toxic fan. (It should also be noted that in addition to its magazine section, WatchGecko is also a retailer that sells watches, none of which are G-Shocks.)

It’s okay to be critical about a watch, but it shouldn’t involve saying slanderous things. It’s sad that such a website, which otherwise appears to have high standards, would give the green light to such an irresponsible article, but we’ve seen the end result of the article ranking at the top of Google for “CasiOak.” It brings to mind the author’s baseless accusation of Casio diluting the G-Shock brand for the sake of sales. We find it more believable that a website would dilute its standards for the sake of clicks.

Why so many G-Shocks with reverse (or negative) LCD displays?
Tags:2100 "CasiOak" Series
2 Comments
Inline Feedbacks
View all comments

Casio do not put the Shock Resist label on Carbon Core Guard models instead the highlight the Carbon Core Guard and the hexacube G symbol that is an upgrade over Shock Resist on resin watches. If he want proof the GA-2100 is a real G then all he has to do is look towards the metal case GM-2100 that has a regular resin case under the metal cover (that are used to strengthen the watch rather then carbon core guard resin case) those have Shock resist written on the back. So much for that theory… What a silly hit piece click bait article…