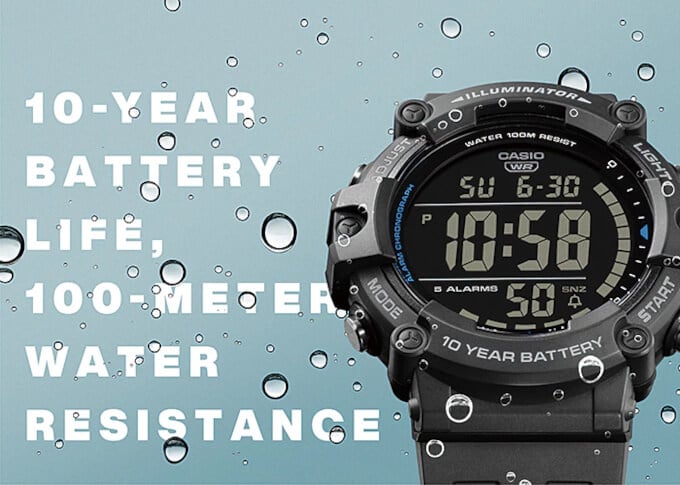 The Casio AE-1500WH series, released earlier this year, has been a huge winner for both Casio and buyers looking for an affordable yet highly functional watch. It’s not a G-Shock, but at around $20-$30, depending on the model and where you buy it from, you certainly get a lot of watch for your money.

In addition to the large Pro Trek-like LCD display, it also offers 100-meter water resistance, approximate 10-year battery life, dual time, 1/100-second stopwatch, countdown timer (24 hours), 5 alarms with 1 snooze alarm, and LED light with afterglow. Another advantage is the use of a CR2032 battery, which is very easy to find in all types of stores. With such an inexpensive price, if you attempt to change the battery yourself and end up damaging the watch, you won’t be questioning your life decisions. The main drawback is the use of resin glass, rather than mineral glass like most G-Shock watches, but that is expected at this price.

All three models are currently in the top five for new releases in Amazon’s men’s wristwatch category, with the black AE-1500WH-1A at number one, the khaki AE-1500WH-5AV at number two, and the gray AE-1500WH-8BV with inverted LCD at number five. Each model currently has a 4.5/5 average user review rating.

All three models have been selling out quickly, but they will be restocked soon, according to Amazon. The khaki AE-1500WH-5AV edition is also reportedly available at Walmart stores in the U.S.