Casio G-Shock collector Mike835 posted a video from the second annual Collector’s Night and G-Shock x Staple release party that took place on December 11 at the G-Shock Soho Store in New York City. The video features photos from the event including shots of the “Collector’s Night 2015” water bottle and button pin set that the first 75 guests received. Also featured is a glimpse of the Soho-only Staple x G-Shock collaboration watch that was available for guests to purchase early.

The Staple x G-Shock Soho NYC watch is a black GA110 featuring a band with a honeycomb print, Staple Pigeon logos and “SOHO NYC” along with orange buttons, hands, and dial ring. There is also a custom cardboard box and a matching Staple t-shirt. According to Staple Design founder Jeff Ng a.k.a. Jeff Staple, the watch will be available at the G-Shock Soho Store next weekend and also at shop.staplepigeon.com next week.

Some of the watches from the event have already found their way onto eBay. The model number on the box is GA110TS1A4JS. The watches were limited to 150 pieces and have a special case back print that includes the production number. It’s not clear if that limit applies to the entire release or just the watches from the launch party which also included a box signed by Jeff Ng.

Staple, also known as Staple Pigeon, is a streetwear clothing brand. In addition to running the Staple line, Staple Design also serves as a creative consulting firm and owns and operates the Reed Space boutique. 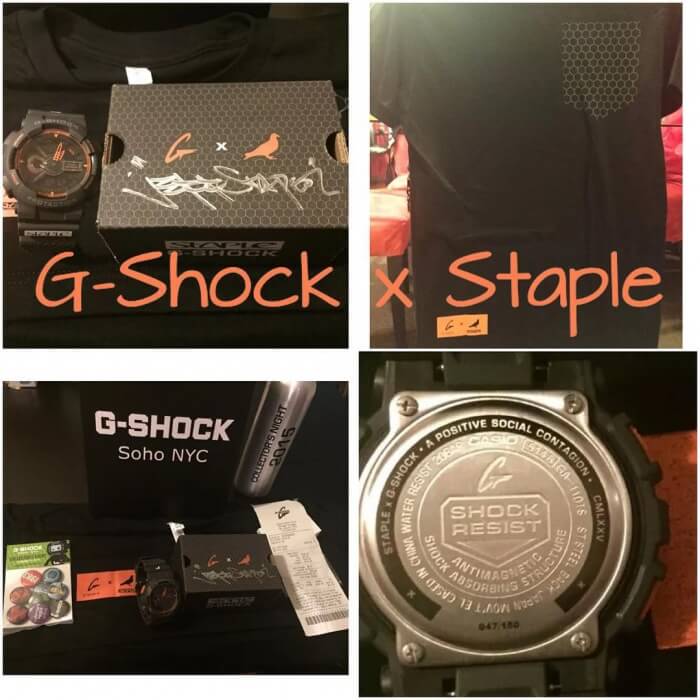 Big thanks to everyone who came out last night to the release party of the Staple x Casio G-Shock piece! Had an incredible time meeting y'all! It's open to the public this weekend at @gshocksohonyc. They'll be available on @staplepigeon online starting next week. Stay tuned! 🙌🏽🐦🙌🏽 #FlockWithUs

Fridge x G-Shock DW5600 Event at Soho, New York Store
Disclosure: G-Central is managed by fans and supported by ads. We may earn a commission on purchases from our links to Amazon, eBay, and Reeds Jewelers. Please follow your country's official G-Shock site for additional release information.