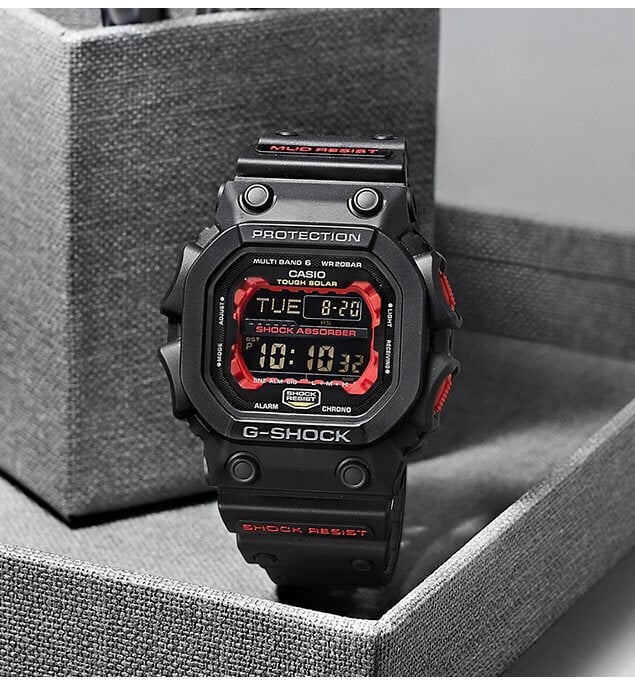 Please note: The Macys.com link is probably blocked if you are not in the U.S. or if you are using a VPN or proxy.

Update: G-Central readers have confirmed that the watch is a GXW-56-1 (see below).

(Update: It was brought to our attention that the page at www.macys.com/p/luxury-watches/ lists the watch as the “GWX56-1A,” which would make it the same model as the Japan-only GXW-56-1AJF with Tough Solar power and Multi-Band 6 radio timekeeping. Although the first product photo on the product page shows the GX56-1A, the last photo (which seems to be exclusive to Macy’s) shows the GXW-56-1A. Also, the product description lists Multi-Band 6 as one of the features. So, we believe (but are not 100% sure) that the watch being sold is actually the GXW-56-1A (with Macy’s calling it the “GWX56-1A”). This seems to make more sense, as this model is still being manufactured for Japan.

Macys.com currently has the extra-large G-Shock GXW-56-1A “King” model for sale (listed as the GWX56-1A by Macy’s). Known for being one of the largest digital G-Shock watches, the GXW-56-1A is for big wrists or big impressions. The Macy’s product page bills it as a “limited edition” and “created for Macy’s.” That may not be entirely true, as the GXW-56-1A (as the GXW-56-1AJF) is part of the current lineup in Japan. (This color was also previously available as a GX-56 model in the U.S.) What it does mean is that Macy’s is the only official dealer selling it in the U.S. now, and it will only be available for a limited time. The price is US$160, and the watch is also available for pick-up at select Macy’s department stores. (We’re not sure if it is also available at the stores or if it needs to be purchased online first.) Most markets outside of Japan usually get the GX-56 series (with Tough Solar and without Multi-Band 6), so this is a good chance to get a Multi-Band 6 GXW model in the U.S. from an authorized seller.

Along with the GXW-56-1AJF, the black and yellow GXW-56-1BJF and the blackout GXW-56BB-1JF are also current models in Japan. A GX-56 model that is still readily available in the U.S. is the GX-56BB-1. There have also been several limited GX-56 collaboration watches released over the past few years.

I’m confused, the Macy’s web page has this model listed as “GWX56-1A”, is noted to have Multiband 6, and the picture detail of the case back says “GX56BB.” Which one is it!?

Thanks for pointing that out! I didn’t see that page with the model number. Also in the description, it says, “Features multi band 6” so that would make it a GXW-56-1A, or as Macy’s calls it, a GWX56-1A. The first 4 photos on the product page appear to show a GX-56, but the last photo, which appears to be an exclusive Macy’s photo, shows a GXW-56-1A. Based on the last photo and the page you provided, I’m guessing that it is the GXW-56-1A.

The actual gxw56-1a’s back is supposed to be red if I am not wrong, I just ordered one from Japan, waiting for the mailman to show up.

Just picked up mine at local Macy’s Yes it is both Tough Solar and Multi Band 6. Back “donut” and all buttons are red. Back marked “GXW-56” and “MADE IN THAILAND.” Wears a little bigger than GWG-1000 MM, but not objectionably.

Thanks for the update!

I can confirm this is a GWX56 as I’ve ordered one from Macys and it was the real McCoy.

You’re welcome for the update – thanks for the great site! BTW, label on box confirms “GXW56-1A.” Rakuten.com frequently offers between 3% and 10% cash back on Macy’s purchases (I waited at 3%, bought at 6%, and two days later it went to 10%, ah, well.) Also, Macy’s regularly takes 25% off random G-Shocks, though no way to predict whether that’ll happen with this one before it sells out. Happy Hunting!