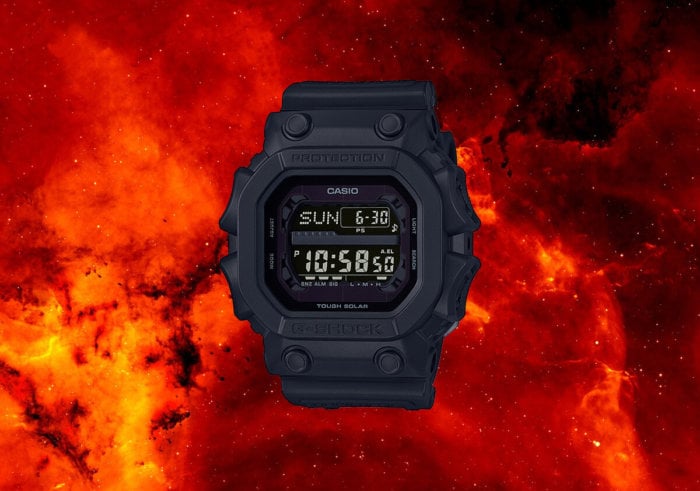 G-Shock Japan announced the GXW-56BB-1JF and now Casio has revealed the G-Shock GX-56BB-1 for the rest of Asia. What makes this announcement interesting is that the GX-56 (Tough Solar) series was assumed to be discontinued years ago with only the GXW-56 (Tough Solar/Multi-Band 6) series living on solely in the Japan domestic market. While never one of the best-selling G-Shock models, the GX-56 and GXW-56 watches have developed a strong cult following over the years due their unique design, extreme toughness, and recent exclusivity. A GX-56 or GXW-56 watch is commonly referred to as the “King” by G-Shock fans online. Originally intended as an extra-tough G-Shock watch for use in the harshest conditions, the King models have also become fashionable watches due to their unique look and size. They are also a good option for larger people who like the square G-Shock design but find the 5600 series too small.

The GX-56BB-1 is a matte black stealth model with no lettering paint and a reverse LCD display. (see comments below) The GX-56 is an extra-large mud-resistant watch designed to withstand impacts from any direction. Like the GXW-56BB-1JF, the GX-56BB-1 features Tough Solar power but does not have Multi-Band 6 radio time syncing. The GX-56BB-1 has the usual features of Tough Solar models like world time, full auto EL backlight, stopwatch, timer, 5 daily alarms with 1 snooze alarm, power saving mode, full auto calendar, 12/24 hour format, and button tone on/off. The GX-56BB-1 measures 55.5 × 53.6 × 17.5 mm and weighs 88 grams.

The GX-56BB-1 is part of the Black Out Basic Series which includes three other non-solar models. 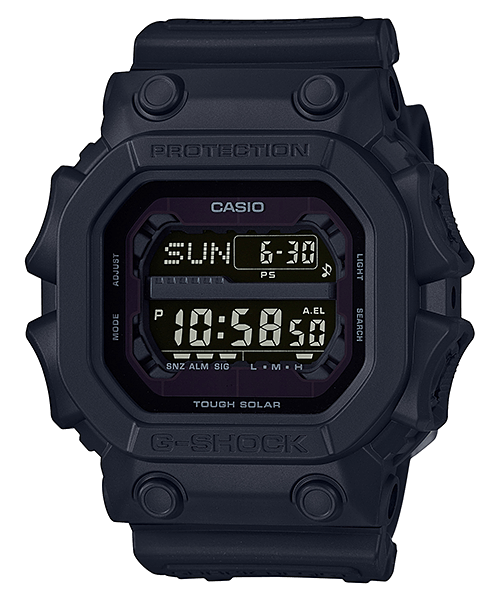 King Nerd x G-Shock GM-6900GKING-9ER watch limited to 300
Disclosure: G-Central is managed by fans and supported by ads. We may earn a commission on purchases from our links to Amazon, eBay, and Reeds Jewelers. Please follow your country's official G-Shock site for additional release information.

Hi,
slight correction re GX-56BB buckle finish, it’s not black ion but rather a standard silver bead blasted finish like the original GX-56 series models from few years ago.

I just got mine today to complement my JDM GXW-56GB-1JF aka “Golden King”.

The Japan-only GXW-56BB-1JF does have a black IP buckle.
https://www.youtube.com/watch?v=YiTVRlofWJ0

What is the difference between the “gx-56bb” (Japan version) and the “gx56bb” (US version)? Is there even a difference? Maybe Japan’s has the blacked out clasp as well?

The GX-56BB-1 is actually the Asian (non-Japan) version and is the same as the GX56BB-1 US version. The Japan version is the GXW-56BB-1JF and that one has Multi-Band 6 along with the black IP buckle.

Hey guys! Is there a reason why this watch is not sold in amazon like most of G schock models? I really want to get it but its 150$ on casio website. I want to get it by a lower price but if theres no other way I’ll just buy from their website.

Recently there seems to be a smaller supply of the newer models from third-party sellers. They probably didn’t anticipate this watch being so popular in the USA. Unfortunately it looks like this model is sold out at ShopCasio.com as well.

Yes for mud-resistant watches like the GX-56 and Mudman the buttons are harder to press.

Yes, there is an older, Japanese-import model that has a standard LCD display and Multi-Band 6, but since it is a Japan-only model it will be more expensive and harder to find. https://www.g-central.com/japan-only-g-shock-5000-series-watches-to-consider/

Hi, I owned a GX56-BB1 for 6 months, but it has a massive issue with “Fogging” in cold weather, or going from heat to cold. I’ve been told this is a model issue, I returned it to Casio UK, unfortunatly it was lost in the post 🙁 I’ve bought another GX56 BB1 as I need a super strong watch for work (petrochemical industry), how do I prevent fogging? Or is this a common issue? Thanks Gaz

It shouldn’t happen. If the new one fogs too I suggest returning it.

Hi, one month on and no issues with fogging up, however I have been advised to avoid wearing for the bath or shower. This appears to be working, so happy days.

Greeting from Indonesia! 🙂
Hey Gary, you same problem as mine. I bought it on early November 2018. It is fogging couple days ago when i ride my bike on rainy day. It was fogging too, when i ride on hot day. Last night, I ask my friend to check it and he told me that GX56BB not as tough as other GX56 series. He also show me that GX56BB seal is very small, so he replace it with a bigger one. I hope that my king kong doesnt give problem anymore :).

Hi guyz..can anyone informed me if this King Of gshock can be used in diving and if ever how deep can it hold.. Thanks

200 metres depth is what they are tested at but I know that they will go a lot further down that that. there are videos of g-shocks going way beyond.. check out diving forums for more info etc.

Is there a possibility to get this watch in orange colour from US now?

The orange one is not available anymore, but you might be able to get the orange bezel and band parts on eBay.

The fogging issue is still not solved even until 2020 . I purchased mine in 2019 and facing this issue. My friend get his in 2020 still facing the same issue.