Currently trending are these three G-Shock watches with the “maritime tricolor” design featuring glossy white cases with red and blue accents on the bezels, faces, and lettering. The models are GA110TR-7A (left, $130), GA201TR-7A (middle, $150, this one seems to be misspelled as “GA210TR-7A” on GShock.com) and GW8900TR-7 (right, with Tough Solar and Multi-Band 6, $150). There is also a 5600 version, the GW-M5610TR-7 (below) which appears to be import-only. These have some of the nicest color schemes we’ve seen recently (reminiscent of the last Mobile Suit Gundam collaboration watch) and would be a great choice for fans of white G-Shocks or those who want something different but not too out there, a good choice for the patriotic, sailors, and fans of certain sports teams. 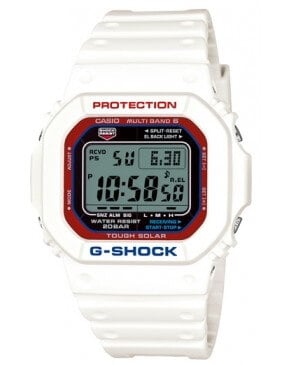