For some fans, G-Shock is the 5000-5600 Series, as the DW-5000C was the first G-Shock ever made and its case is a timeless design that has not just survived but thrived over three and a half decades. Its creator, Kikuo Ibe, still favors the “square” line for his personal use, and the classic case design will always be a major part of the G-Shock lineup. Some of the distinctions of the 5000 Series include movie appearances (Speed), certification for space flight by NASA (DW-5600), and inclusion in the “Essential Historical Materials for Science and Technology” registry at Japan’s National Museum of Nature and Science (DW-5000C).

For those who are new to G-Shock, here is an overview of all the currently available 5000-5600 models. (We are focusing mostly on models that are available outside of Japan which retain the classic square case. For more on the history of the 5000 Series, see Watch Geek’s excellent “G-Shock history – 1984 – 1995 – squares” video.) 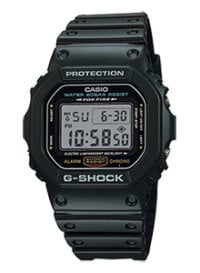 The DW-5600 is the most common of the 5000 models and is often the base model for special color editions and limited collaborations. The standard DW-5600E-1V, with a list price of US$69.95, can be found heavily discounted online and is one of the most affordable G-Shock watches. Though limited in its functions compared to other 5000 models, the DW-5600 is just as shock-resistant and water-resistant (200M/20BAR) as more expensive G-Shock watches. Those who are concerned about that should watch the real world 200-meter depth test video.

(The more advanced DW-D5600 is not commonly seen outside of Japan but sometimes shows up as a special edition, such as the DW-D5600NH-1. Upgraded features of the DW-D5600 include world time, 3 alarms with 1 snooze alarm, button tone on/off, auto EL backlight, and estimated 10-year battery life.) 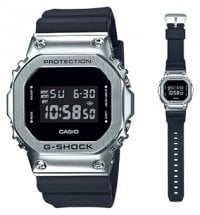 The GM-5600 is G-Shock’s affordable option for a metal square. It has the same features as the DW-5600 combined with a stainless steel bezel. The GM-5600 series is currently only available with resin bands. 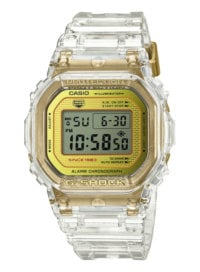 The modern DW-5000 is an updated version of the original G-Shock DW-5000C from 1983 that appears as limited anniversary editions. These special editions sometimes have replica color schemes like the DW-5035D-1B or original color schemes like the DW-5035E-7 seen here. Like the original, the modern DW-5000 models have a stainless steel inner case and screw-lock case back. The anniversary models are distinguished by a stainless steel band keeper and a commemorative case back. 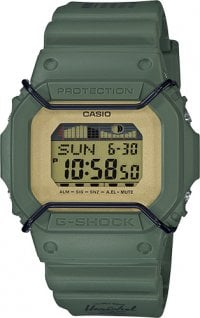 The GLX-5600 is a G-LIDE surfing model with a tide graph and moon chart. It is a less common model and sometimes the base for special color editions and collaborations. (An upgraded version, the GWX-5600, with Tough Solar and Multi-Band 6, is a regular model in Japan and sometimes makes a worldwide appearance.) 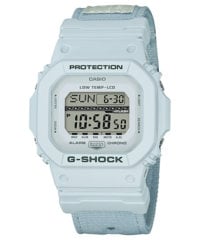 The GLS-5600 is a lesser-known G-LIDE model designed for snow sports like skiing and snowboarding. Unique features include the low temperature LCD and a 1/100-second double stopwatch that records up to 1,000 hours each. The latest release was the GLS-5600CL series which included four models with a cloth band. The colors are conventional, and the cloth band has a patch inspired by flight jackets, giving the darker models a military vibe. 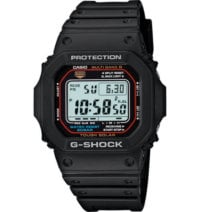 Our top pick for an entry-level G-Shock, the GW-M5610 offers maintenance-free operation with the inclusion of Tough Solar power and Multi-Band 6 radio timekeeping that syncs the time automatically (if within range of one of the six transmitters). The GW-M5610-1 is the standard model featuring the traditional black and red colors, and it is often available at a discount. Special color editions are sometimes available, but not as much as with the DW-5600. The “full auto EL backlight” option means that the backlight will activate with a turn of the wrist only when in a dark environment, as opposed to an “auto EL backlight” that will activate in both light and dark conditions.

(The G-5600 is an international version with Tough Solar and without Multi-Band 6.) 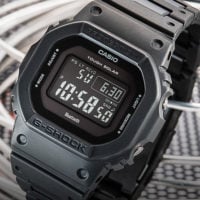 The GW-B5600 offers the same software functions as the full-metal GMW-B5000 (below) but in a resin case with the standard four-point case back. So far, the selection of GW-B5600 models has been somewhat limited, but we expect to see more models in the future. Some models, like the GW-B5600BC-1B, have a composite band with hard resin links. 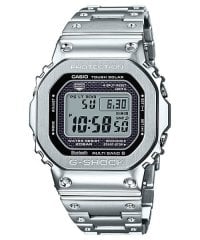 What seemed like a risky novelty at first turned out to be a huge success for G-Shock in 2018, as the popularity of the GMW-B5000 extended beyond just the G-Shock fanatics and into the realm of general watch enthusiasts. The suit-friendly GMW-B5000 is the first “full-metal” square and has a stainless steel bezel, inner case, and DLC-coated screw-back. Equipped with Bluetooth connectivity, new features that the GMW-B5000 brings to the square family include an STN LCD display, 5 settable home time cities, 300 world time cities, 5 adjustable day of the week languages, MM/DD or DD/MM date setting, time and place log, 5 settable reminders, and a phone finder function. For 2019, G-Shock released the GMW-B5000TB-1 and GMW-B5000TCM-1 limited editions with a DLC-coated titanium construction and sapphire crystal.

The following are Japan-only models: 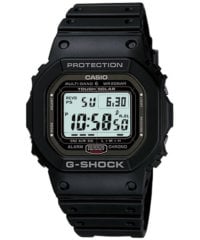 The Japan-only GW-5000-1JF is also very popular as an import in other countries due to its stainless steel inner case and screw-lock case back, features that the original and early 5000 G-Shocks had but no longer do (except for special edition DW-5000/5700 watches and the GMW-B5000 series). The inner case and screw-back are also treated with a scratch-resistant DLC coating which is usually found on only the most expensive G-Shocks like the MR-G series. The band is made of a softer urethane that is said to be more comfortable than other 5000 resin bands. Due to its superior build quality and its made-in-Japan status, the GW-5000-1JF is on the pricier side, but not so expensive as to deter many G-Shock fans and watch collectors. To fans, it has become an icon that symbolizes the original vision of G-Shock as well as its dedication to its history, innovation, and followers. The GW-5000 is sometimes the base for limited editions, such as the 35th Anniversary’s GW-5035A-1 which quickly sold out.

The GW-S5600-1JF is another Japan-only model that is popular outside of Japan. It has a carbon fiber reinforced band along with titanium exterior metal parts (case back, screws, buckle). It is known for being the lightest G-Shock watch at 47 grams.

The GLS-5600 G-LIDE models are worthy of inclusion in this list as well.

Thanks, had a feeling I was missing something

Yes, thanks, we previously wrote about it. https://www.g-central.com/transformers-x-g-shock-dw-5600tf19-set-master-nemesis-prime-2nd-collab-for-dec-2019/

A great and brief guide for sure. Can we please have it updated from time to time and get it stickied to the ‘buyer’s guides’ section of the site menu?