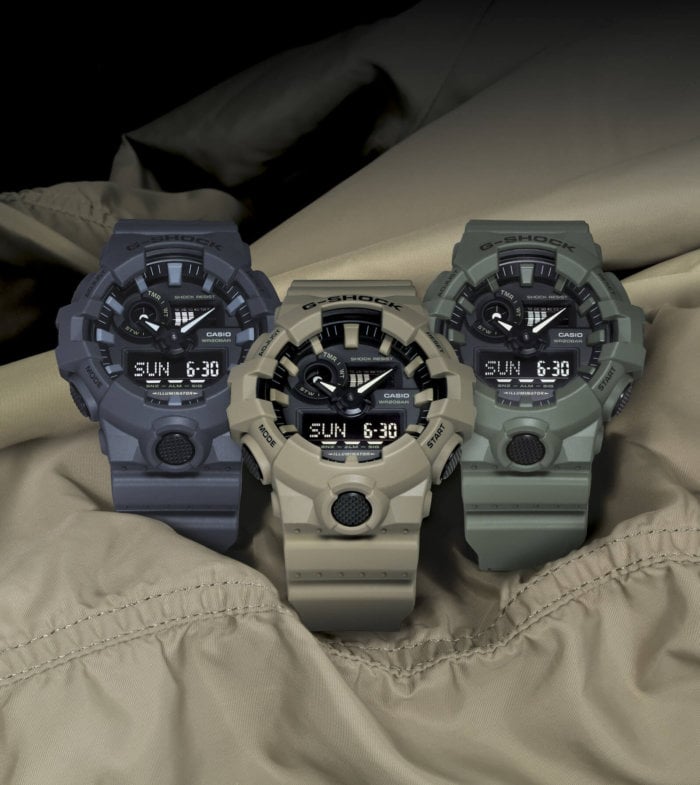 Casio America announced the G-Shock GA700UC Utility Color Collection for an August 2017 release. This series includes three colorways inspired by military uniforms and utility jackets: GA700UC-3A (olive green), GA700UC-5A (tan), and GA700UC-8A (dark gray). Each model has a list price of $99 USD. With its monotone bezels and bands, dark displays, and black buttons, the GA700UC series is a solid choice for uniformed jobs and those who prefer a tough and conservative style. The GA-700UC series is also expected for a worldwide release.

The base GA-700 was first launched in late 2016 and has been one of Casio’s most heavily promoted new G-Shock models. Its distinguishing features include a front LED light button, 5-year battery life, large 3D markers and hands, and affordable price. Other features include shock resistance, 200-meter water resistance, world time with 48 cities and UTC, 4 daily alarms, stopwatch, and countdown timer.

G-Shock 5000-5600 Origin “Square” Series Buyer’s Guide
Disclosure: G-Central is managed by fans and supported by ads. We may earn a commission on purchases from our links to Amazon, eBay, and Reeds Jewelers. Please follow your country's official G-Shock site for additional release information.

Gr8 watch with outstanding look. Rugged and full of strength. Recommend it to tough guys.