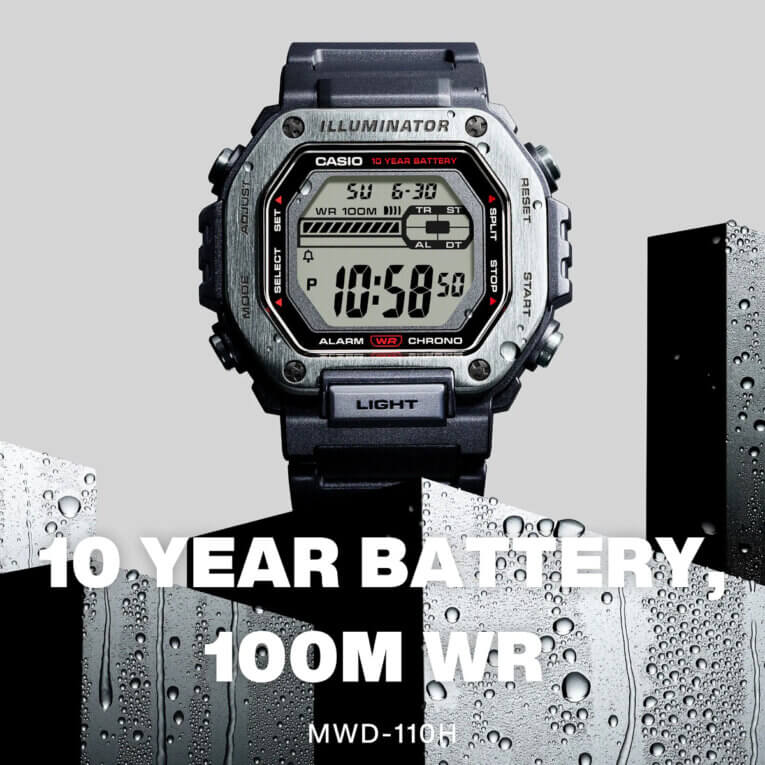 We’re all about G-Shock here, but there are many other Casio watches that are deserving of our attention. Casio has been stepping up its general lineup in recent times, with many new feature-rich models that are more affordable than a G-Shock. One of the more intriguing new series is the MWD-110H, which was launched in January 2023 and is likely to be another hit. This series is reminiscent of the W-737H and DW-291H with a rugged-style case, 100-meter water resistance, and an approximate 10-year battery. 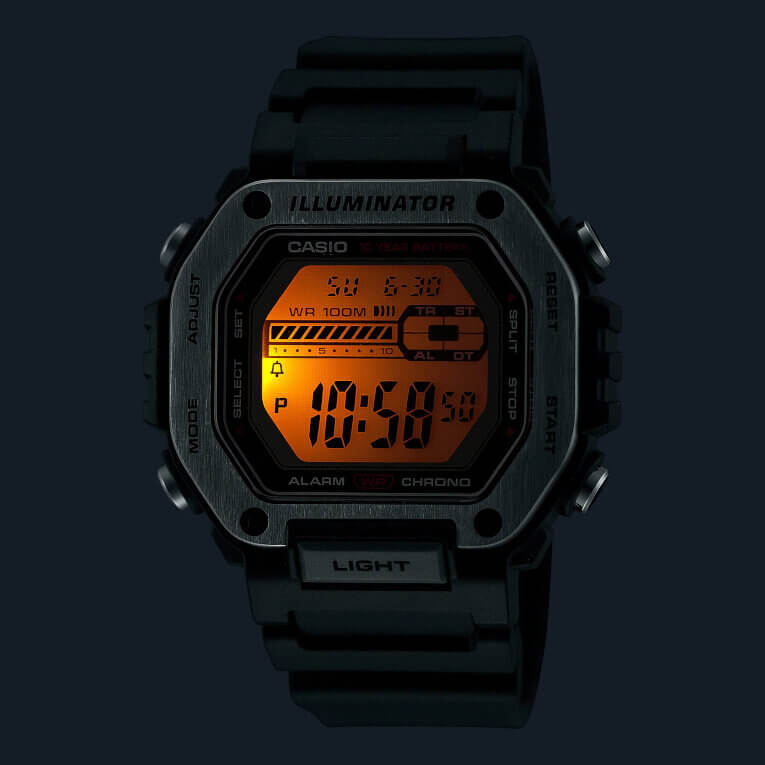 The MWD-110H has G-Shock 5000-inspired design with a resin case, stainless steel bezel, and resin band. Unlike the the DW-291H with its superior mineral glass display, the MWD-110H uses resin glass like the most of the affordable Casio watches. At 47.2 millimeters wide and 50 grams, the MWD-110H is smaller and lighter than the DW-291H. Some may prefer the real front screws on the bezel of the DW-291H over the plastic front screws of the MWD-110H, but the MWD-110H has a front light button that some might prefer. When it comes to functions, the MWD-110H is somewhat more limited (with the same functions as the more affordable W-737H), as it has dual time (no world time), one daily alarm, non-adjustable afterglow for the LED backlight, and no button sound disabling. Advantages of the MWD-110H over the DW-291H include showing the current time in stopwatch and timer modes, auto-start (with 5-second countdown) and target time alarm for the 1/100-second stopwatch, and auto repeat and progress beeper for the countdown timer. (The progress beeper beeps when the timer passes the 10, 5, 4, 3, 2, and 1-minute marks, and the 50, 40, 30, 20, 10, 5, 4, 3, 2, and 1-second marks.)

International releases include the black MWD-110H-1AV, green MWD-110H-3AV, and gray MWD-110H-8BV, with the gray model not being released in the U.S. In the U.S., the MWD110H-1AV and MWD110H-3AV have a list price of $42.95 each and are available at Casio.com. The MWD-110H-3AV is also available for pre-ordering at a big discount at Amazon, with a release date of February 1. (Amazon lists mineral glass as a feature, which appears to be an error.) 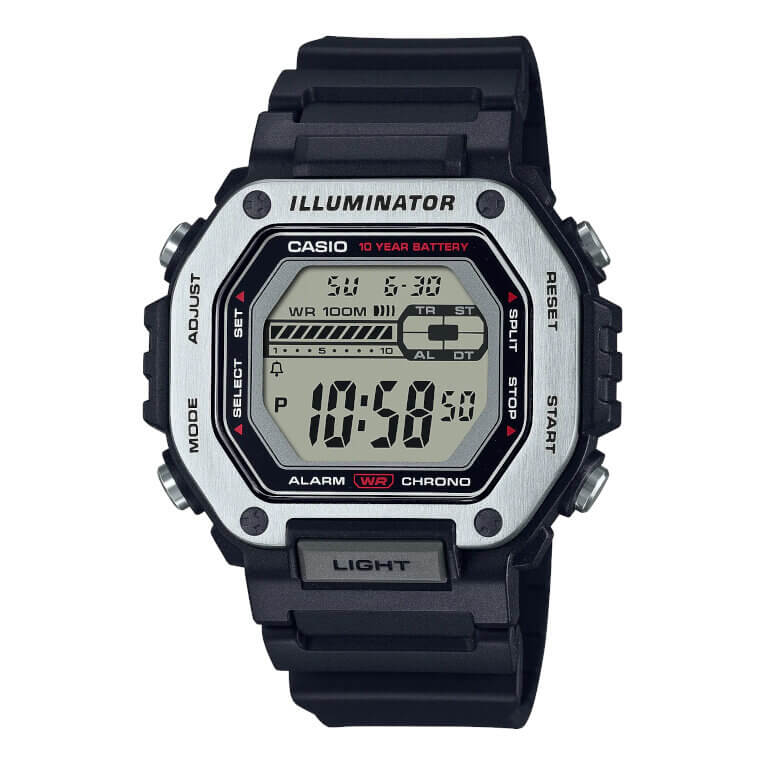 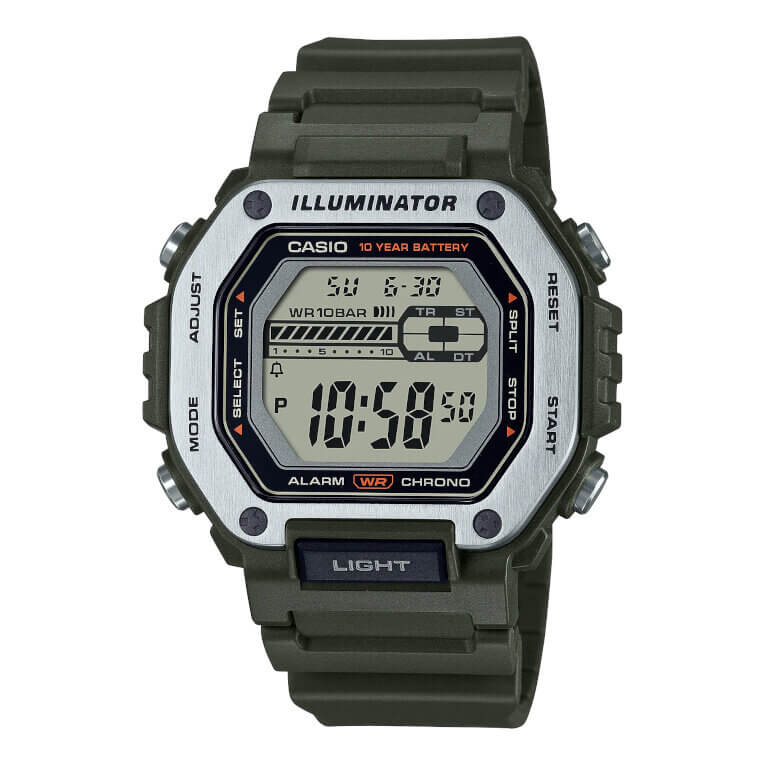 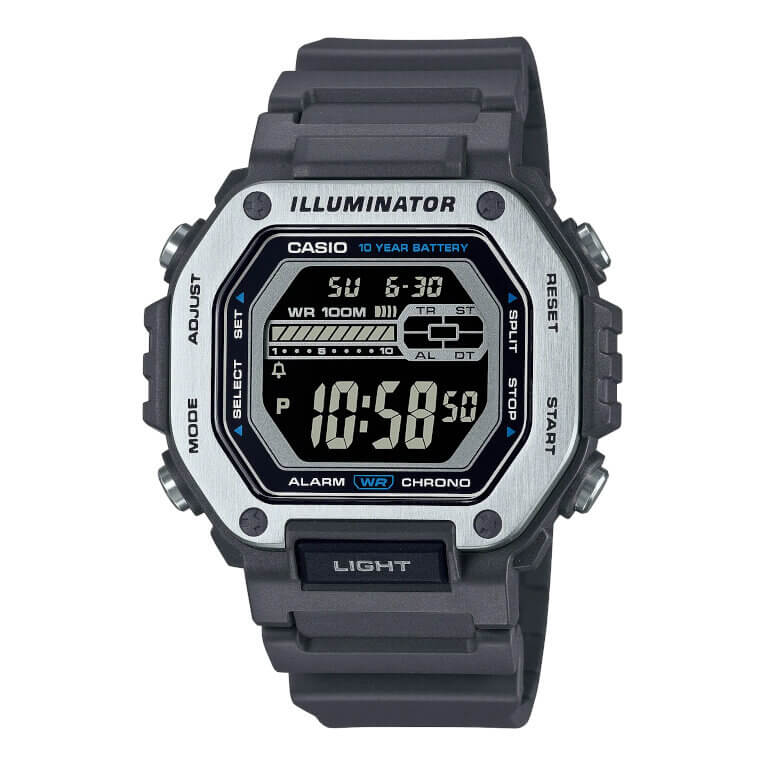 G-Shock G-LIDE GBX-100 with MIP LCD, Step Counter, Tide, Vibe
Disclosure: G-Central is managed by fans and supported by ads. We may earn a commission on purchases from our links to Amazon, eBay, and Reeds Jewelers. Please follow your country's official G-Shock site for additional release information.

Nice, it has an auto-repeating timer, seems like a first for a Casio, at least not a very common feature on the GShocks.

Neat, thanks! I like squares with the pixel display for date so I’m going to hold out a bit longer, otherwise maybe get a GBD

Stop foolin’ around. Any casio lower than g shock that comes with resin band is very shitty. It wil eventually tear & no spare part available. Even there is any, the price is not acceptable compare to a new watch. I have a non g shock with tough solar. Resin band was out before 2 years of wearing. Now it just sits in my closet for 5 years. Will not buy any resin band watch unless it is g shock. But keep the quantity to 1 only.