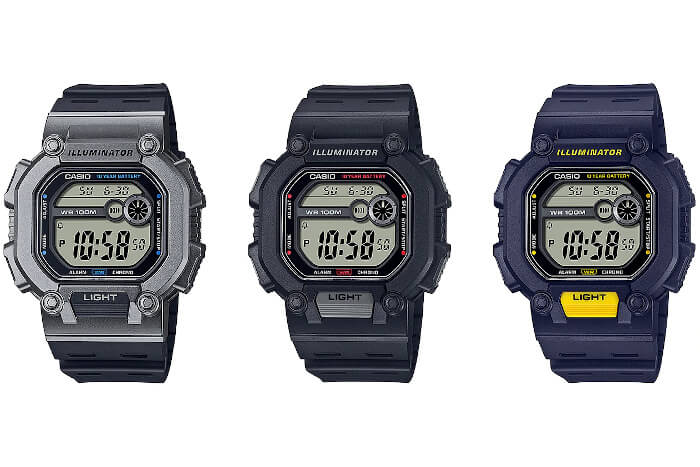 The Casio W-737H series is not G-Shock, but it has a rugged style that is obviously influenced by G-Shock. At an extremely low price point, the W-737H offers some nice specs, such as 100-meter water resistance and a 10-year battery, which make it a worthwhile alternative to a G-Shock. The series includes the silver W-737H-1A2V, black W-737H-1AV, and blue W-737H-2AV.

For around half the U.S. street price of a G-Shock DW-5600E, the main sacrifices are the lack of G-Shock-quality shock resistance, resin glass versus mineral glass, 100-meter versus 200-meter shock resistance, no flash alerts, and a slightly less accurate quartz movement with an accuracy of ±30 seconds per month versus ±15 for the G-Shock. The W-737H’s advantages are an approximate 10-year battery and the dual time feature. The W-737H is also unique because it is a square-like model with a front light button, which is not seen on square G-Shocks, except for the GBX-100.

The W-737H series was announced for Asia and the Middle East in August 2020. It is reportedly not being released in Europe, but it is available in the U.S. from Amazon.com. Casio has not announced the watch in the U.S. yet, and it could be a case of the series being exclusively available on Amazon, where it is currently available for pre-orders with a release date of September 15, 2020.

G-Shock Street Spirit Series with graffiti style pays tribute to the brand’s origin
Disclosure: G-Central is managed by fans and supported by ads. We may earn a commission on purchases from our links to Amazon, eBay, and Reeds Jewelers. Please follow your country's official G-Shock site for additional release information.

This reminded me of Rolex and Tudor; a successful strategy to attract customers of different economic levels.