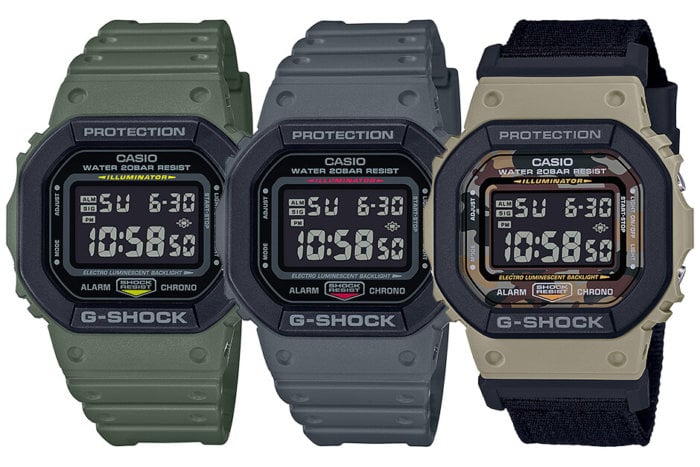 G-Shock announced the DW-5610SU-3JF (list price 12,000 JPY), DW-5610SU-8JF (12,000 JPY), and DW-5610SUS-5JR (16,500 JPY) for a February 2020 release. These models feature a layered, double-molded resin structure resulting in the case being a different color than the bezel. This confirms that the different color of the bezel is the resin color, and not paint. This is a Street Utility color series inspired by military and service colors.

The DW-5610 has slightly different dimensions than the DW-5600, but this is barely noticeable at 48.9 x 43.8 x 13.5 millimeters versus 48.9 x 42.8 x 13.4. Internally, the features are the same as the DW-5600 and include a stopwatch, countdown timer, alarm, flash alert, and EL backlight with afterglow. The “10” in the model name appears to refer to the double-molded case style. All three models have quick-release bands, and the bands are compatible with the GA-2100. 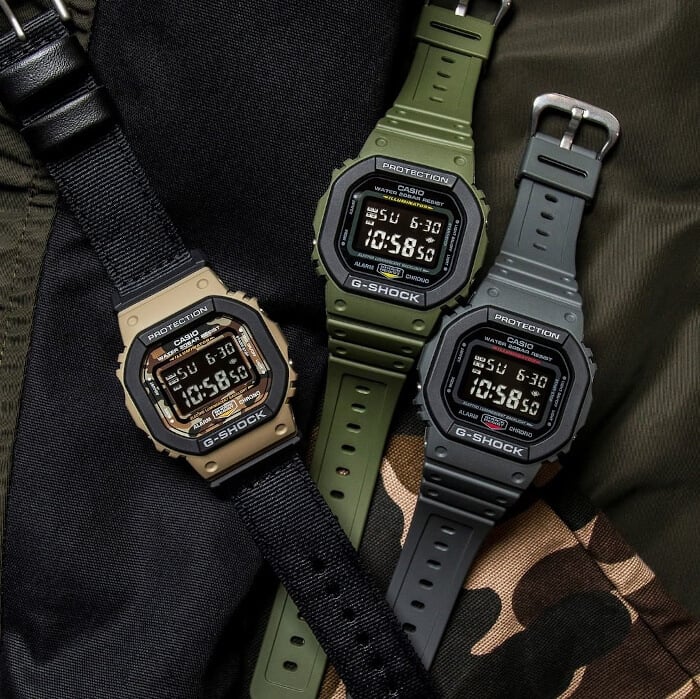 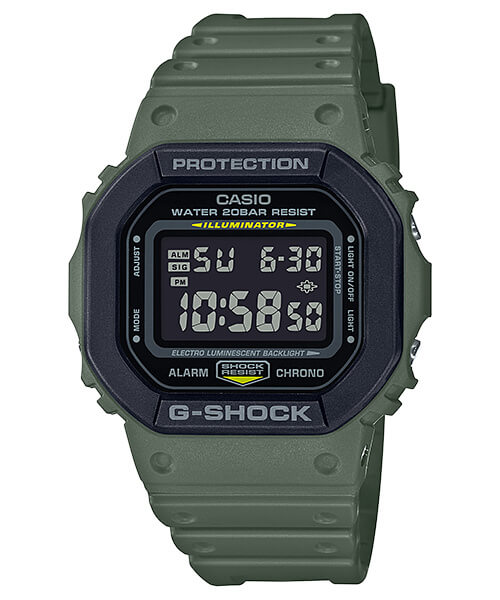 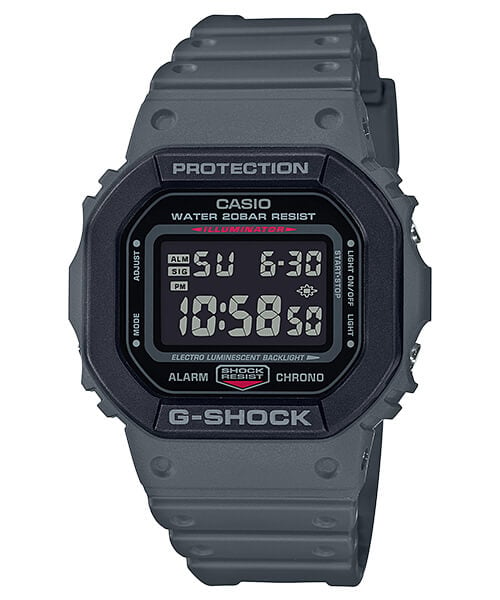 Black bezel with brown case and camouflage face. This watch includes both a black cloth band and a brown resin band and has the Japanese model code DW-5610SUS-5JR, with “JR” usually denoting limited edition status. 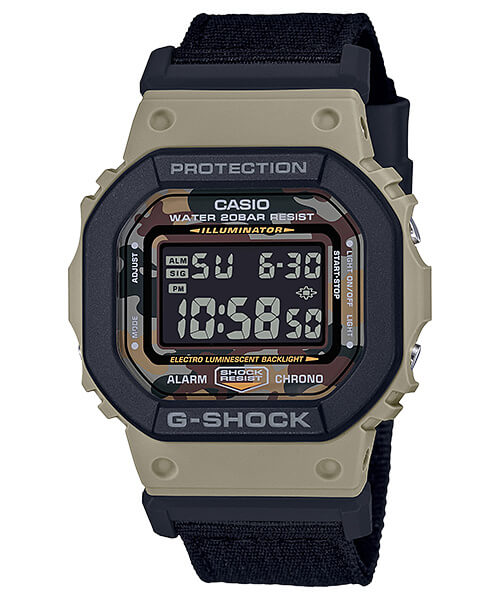 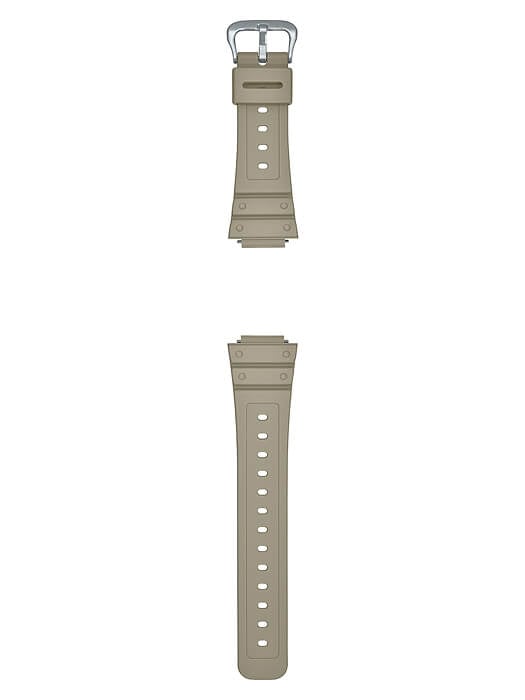 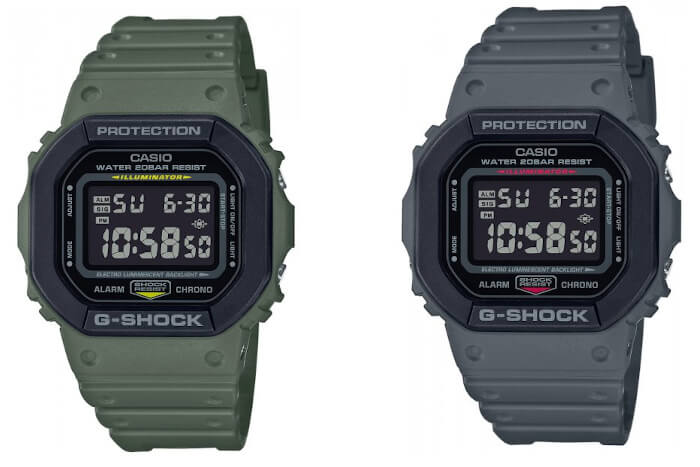 Several European e-commerce sites revealed the new G-Shock DW-5610 series which will be launching with three models: the DW-5610SU-3 (left), DW-5610SU-8 (right), and DW-5610SUS-5. These watches utilize the classic square case and feature cases and bands that are a different color from the black bezel. (The effect is somewhat reminiscent of the glossy bezel and matte case of the titanium GMW-B5000TB-1.) Surprisingly, this is the first time we’ve seen this kind of combination on DW-5600 watches, and it opens up all sorts of possibilities for future releases. (The upcoming GA-2110SU and GA-2100SU models will also utilize this style with black and camouflage bezels.) Some sites have described this style as a “layered bezel.”

Based on the specs we’ve seen on the various e-commerce sites, it appears that the DW-5610 has the same internal functions as the DW-5600, and the “10” possibly signifies the bezel style. (The upcoming GA-2110SU-3A and GA-2110SU-9A also have a black bezel with a different colored case, while the GA-2100SU-1A has a camouflage bezel.)

This post will be updated when official information is available.

2020 G-Shock Releases That Are Discontinued
Disclosure: G-Central is managed by fans and supported by ads. We may earn a commission on purchases from our links to Amazon, eBay, and Reeds Jewelers. Please follow your country's official G-Shock site for additional release information.

So, this is a paint application to the portion of the bezel nearest the crystal? Hmm. Okay…

It is the naming scheme that I don’t like. “5610” already occupies that part of my brain that keeps square names organized. I don’t need a goofy paint job on a bezel mucking things up! What are they going to call the GWM layered bezel then? Aaargh!

I think it is a different colored resin rather than a paint job, like the dual-layer resin bands. I’m sure your brain can remember one or two more things, and there are probably more important things to stress about in your life.

For the GW-M5610, yes, it was Multi-Band 6 versus Multi-Band 5, and some of the other features were a little different than the GW-M5600. But this is DW-5610, not GW, and the difference appears to be mostly cosmetic, though we have not seen the official specs yet. It may be like the GA-700 versus the GA-710 where the differences are external rather than internal.

Is it water proof