Update: Casio has also announced an Asia release for the three models.

The Gravitymaster GA-1100GB-1A has gold lettering, markers, and hands. It has a Twin Sensor (compass bearing sensor and digital thermometer) and features dual dial world time with its analog subdial. Retail price is ¥27,000 JPY. 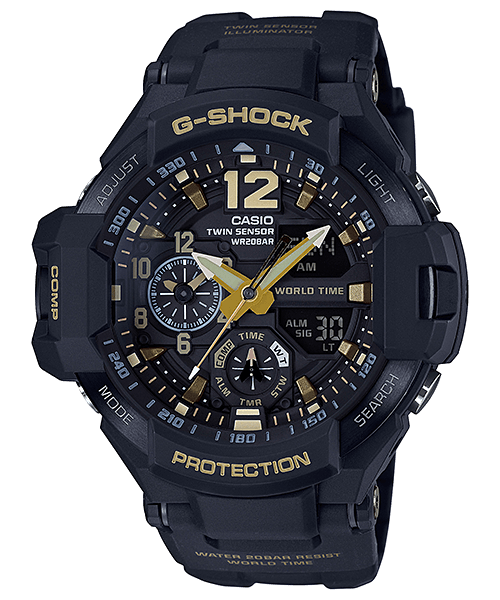 The Mudmaster GG-1000GB-1A has gold lettering, dial ring, markers, and hands. Along with its Twin Sensor this model is also resistant to mud and dust. Retail price is ¥37,000 JPY.

The Gulfmaster GN-1000GB-1A has a gold metallic bezel and gold hands. In addition to the Twin Sensor it also has a tide chart and moon phase graph. Retail price is ¥32,000 JPY.

Baby-G BA-110TP Tribal Pattern Series
Disclosure: G-Central is independently managed by fans and supported by ads. We may earn a commission on purchases from our links to Amazon, eBay, and Reeds Jewelers.