Update: Early GWN-Q1000 models were known to have problems with the analog hands becoming misaligned and needing repair. Casio corrected the problem in later models, but the GWN-Q1000 series was recently discontinued. If you are looking to buy this model, consider the GWN-Q1000A-2AJF, which was the most recent active model in Japan before the series was discontinued. 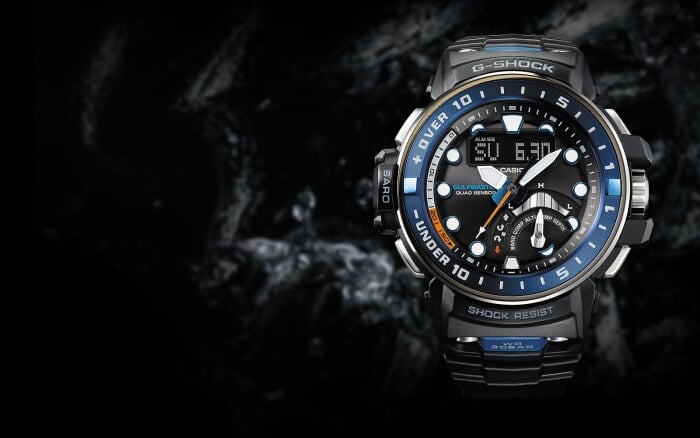 The most surprising Casio news out of Baselworld 2016 is the announcement of the G-Shock Gulfmaster GWN-Q1000, an all-new ocean concept Gulfmaster model and the first G-Shock to feature the Quad Sensor. The Quad Sensor includes the altimeter-barometer, compass (with automatic horizontal compensation or “level correction”), and thermometer of the Triple Sensor, plus a depth gauge to measure water depth like the upcoming Frogman GWF-D1000. The GWN-Q1000 is a significant upgrade to the Gulfmaster GWN-1000 that will prove its seaworthiness to the most demanding maritime users. 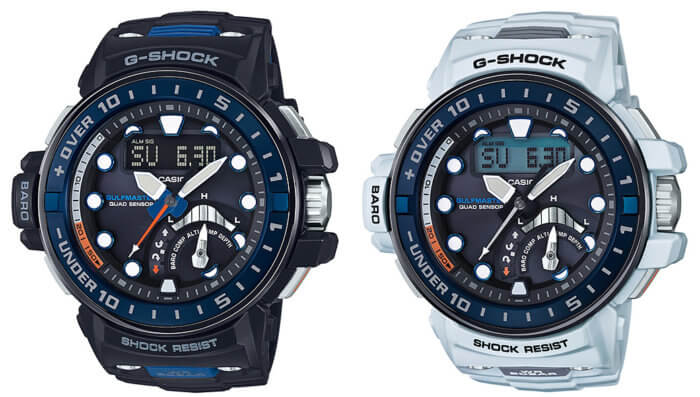 The environmental sensors are designed to track changing ocean conditions by coast guard personnel and others who are active on the sea. The barometer tracks changes in atmospheric pressure to predict sudden weather changes. The thermometer tracks changes in air and water temperature. The compass helps to determine the direction of the wind and tides. The depth meter measures the current depth when underwater.

The GWN-Q1000 also has a tide graph and moon age data. It is the first Gulfmaster model with sunrise/sunset data and a sapphire crystal. The watch has a resin case with a carbon fiber reinforcement. The back cover and band are made of soft urethane for maximum comfort on the wrist. The markers and hands have a phosphorescent treatment for visibility in the dark.

The Gulfmaster GWN-Q1000 exterior design is similar to the GWN-1000 with some unique changes. The LCD subdisplay is now on the upper half of the face and the tide graph and barometer indicators are at the 5 o’clock position and also include a sensor mode indicator. The side buttons look more like the Frogman rather than the circular buttons of the GWN-1000. Like the GWN-1000 it has numbers on the bezel to display changes in altitude and atmospheric pressure. 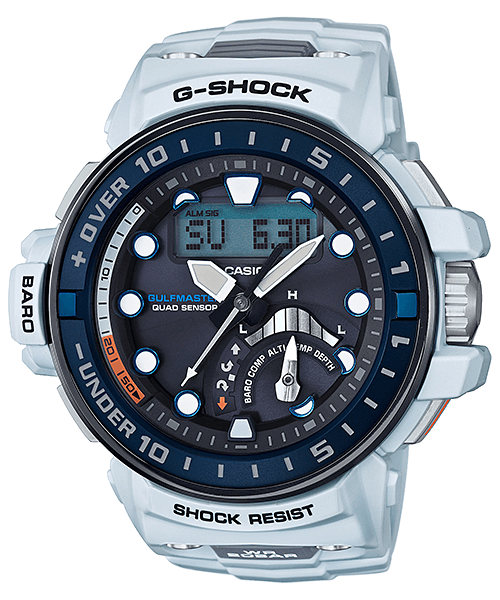 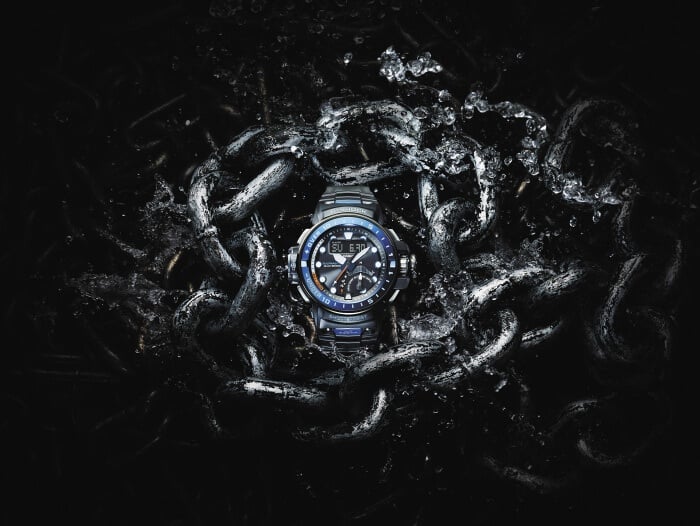 G-Shock Gulfmaster GWN-Q1000 is no longer in production
Disclosure: G-Central is managed by fans and supported by ads. We may earn a commission on purchases from our links to Amazon, eBay, and Reeds Jewelers. Please follow your country's official G-Shock site for additional release information.

I’m SO excited for this watch – please post an update when you know the release date:) Exciting!

Yes I definitely will.

Why don’t they include vibration alarms on these watches? If it’s designed for offshore you are commonly sleeping in close proximity to others and on a watch schedule where waking up everyone or not hearing it at all due to background noise/earplugs are definite risks. I would buy this thing in a second if it had a vibe alarm. I love the sensors but if I can’t wake up to stand my watch they aren’t doing me any good.

Mi band 🙂 and no one get disturb

The watch I have been waiting for: Just like the SeaPathFinder 40. Baro, compass, tide and yacht timer plus solar powered and radio controlled accuracy. Now only a Titanium version. Hefty price tag though!

I Just have to explain to my wife why I’m not wearing my Tissot sailing Touch anymore.

She will understand the great craftsman ship of Casio, tissot is a great timepiece too

Love the quad sensor gulfmaster g shock, Benn waiting years for Casio to have depth sensor, and it’s here, Casio keeps getting better by the years, and still have my first original g shock from 1983 in yellow amongst my g shock collection

I have been researching this watch all over the internet and I m close to buy it. I was, that is. This watch is ment to be worn at sea and travel the oceans. But there is an issue. It is a wave ceptor only. How can it keep it’s accuracy at sea far away from any atomic watch signal? At the very least I’d want a bluetooth connection to a smartphone that receives signals from GPS satellites and then use it to reset the watch. At $850 I’d expect GPS and/or bluetooth connection as well.
Any comments ?

You can wait and see if an updated Gulfmaster is released but there’s no guarantee that the next one will have GPS or Bluetooth. The quartz movement is very accurate to begin with so it’s not like the watch is going to become grossly inaccurate all the time. If GPS or Bluetooth is the highest priority then there are a lot of other G-Shock models to choose from. The closest model to the Gulfmaster with GPS right now would be the GPR-B1000 Rangeman. It can sync the time automatically with GPS and has a Triple Sensor (altimeter-barometer, compass, thermometer), but it is a digital model.

I have a GWN Q1000 and have recently headed out to the middle east and outside of the range of the EU atomic clock. As we speak the last time the watch was sync’d was the 9th of October and so far it is still accurate to the second when I reference the watch to the timeis website.
If this continues then it would suggest the quartz mechanism is as accurate as the best VHP quartz movements. The GWN Q model seems to have fallen from grace and I bought mine heavily discounted from Casio in the UK it is working very well so far and is an excellent product.

As of today (November 7th) the watch is circa 0.5 seconds slow verse reference to Timeis website time.

That is almost 1 month and suggests the movement is as good as any quartz movement on sale currently.

2 months without sync and the watch is now not quite 1 second fast. Taking the fact that the second doesn’t quite move ahead in step with the reference time.

I think perhaps the accuracy of the quartz movement is possibly because of the fact this model was manufactured in the Japanese factory.