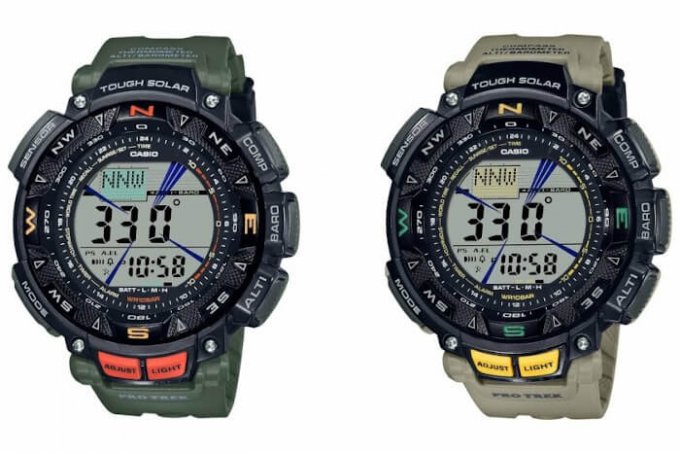 The Pro Trek PRG-240 is essentially a classic when it comes to Pro Trek watches. Released in 2010, it is from a time when Triple Sensor watches were the realm of Pro Trek (or Pathfinder in the U.S.), when Pro Trek was the Casio brand known for its large watches, and before G-Shock started getting in on the sensor action with lines like the Rangeman and Mudmaster. Though it’s been eclipsed in recent times by newer models equipped with the Triple Sensor Version 3 (which is said to be more power-efficient), the PRG-240 series is a fan-favorite that is still being produced and sold. (In the U.S., the PRG-240 is sold as the PAG240.) Casio.com currently sells the PAG240-1, and Amazon sells the PAG-240B-2 with a blue case and cloth band and the PRG-240T-7 with a titanium band. Casio is reportedly releasing two new colorways soon: the PRG-240-3 and PRG-240-5.

The most interesting feature for those accustomed to newer models is the duplex LCD. This is basically another LCD screen on top of the main one, which displays blue radial pointers. This display is most useful for indicating the directions in compass mode. The pointers can also refer to times or values on the 24-hour scale and barometric pressure graph surrounding the dial, for features like world time, sunrise/sunset time, and the barometer. 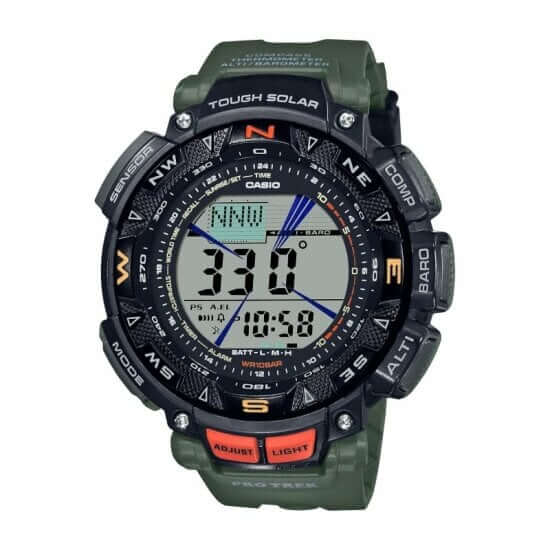 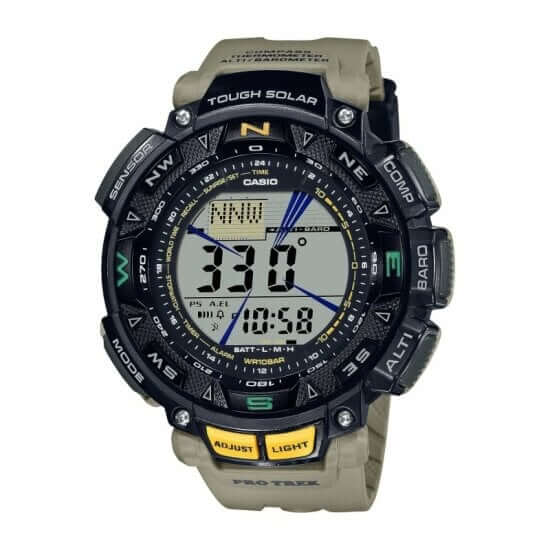 Pro Trek PRW-3400 with Dual-Layer LCD for Compass Reading
Disclosure: G-Central is managed by fans and supported by ads. We may earn a commission on purchases from our links to Amazon, eBay, and Reeds Jewelers. Please follow your country's official G-Shock site for additional release information.

“on top of the poor water resistance rating (only 5 bar at most)”
The Pro Trek PRT-B50 (first Pro Trek with Bluetooth, other than the WSD smartwatch series) has 10 bar water-resistance. PRG-260 is not an active model anymore, seems to have been replaced by the PRW-3500.

The PRW-3500 seems to be discontinued (and replaced by the PRW-3510) according to the Japan and Asia sites, but there are still some PRW-3500 models being sold by Protrek.com and Amazon.com. On Amazon, one is a little cheaper than the PRW-3510Y-8 model that Amazon sells (though not by much), and another one has a titanium band, and both of these models have a regular, non-inverted LCD display (albeit non-STN like you said) unlike the PRW-3510Y-8 with its inverted STN LCD. There is also the PRW-3510Y-1 with non-inverted STN LCD in Japan and Asia, but if buying this model from the U.S., it would be rather expensive as an import. For some people, there are some points in choosing a PRW-3500 over a PRW-3510 at the moment.

The EL backlight loses a lot of its brightness after a while, from my experience with my watches (Casio also mentions that in manuals). It seems like the LED backlight would have a longer lifespan.

I don’t think the PRW-3500 backlight would bother me in person either (also factoring in how much I would expect to use it on a daily basis), but I’ll take your advice and try to see it sometime.