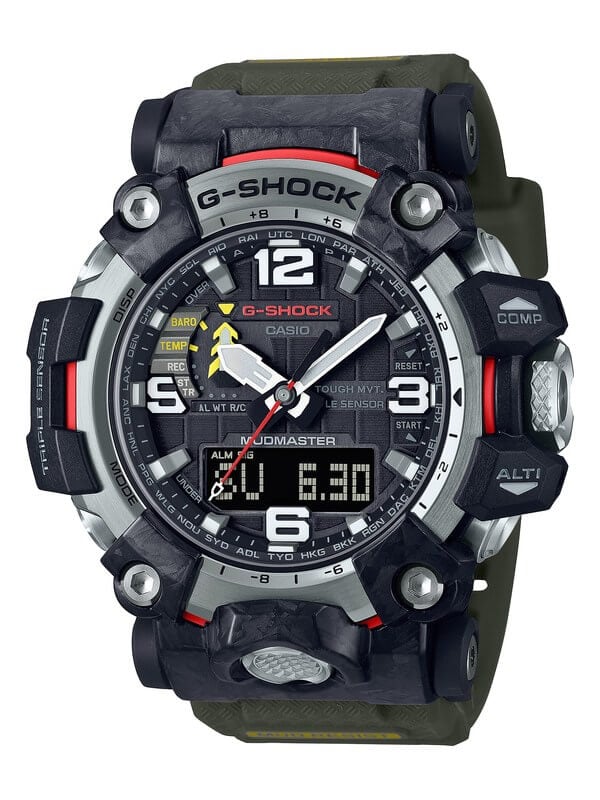 The all-new G-Shock Mudmaster GWG-2000 features forged carbon parts and a case made of carbon fiber-reinforced resin. Forged carbon, which is made of carbon fiber particles mixed with resin and pressed at high heat and pressure, is lighter and stronger than stainless steel. The GWG-2000 is the first G-Shock watch to use forged carbon in its construction. The unique black and gray surface pattern of the material is visible on various parts of the watch, including the bezel bumpers, front button guard, and lugs. The new materials and structure allow the GWG-2000 to be 1.9 millimeters thinner and 13 grams lighter (106 grams) than the GWG-1000. 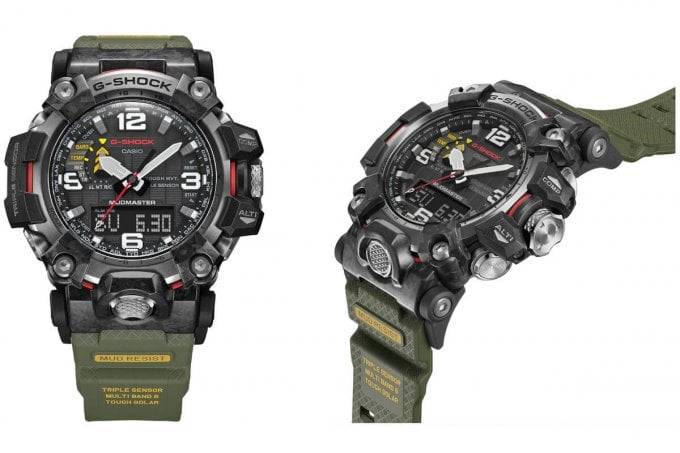 Like the previous Mudmaster GWG-1000, the GWG-2000 is resistant to mud and dust and features Tough Solar power, Multi-Band 6 automatic radio time syncing, and the Triple Sensor (pressure: altimeter-barometer, compass, thermometer). The watch has newly designed Mud Resist buttons, with stainless steel button pipes and an internal silicone buffer for improved mud resistance. Stylistically, the GWG-2000 is not much of a departure from the GWG-1000, with a similar dial layout and dimensions of 61.2 x 54.4 x 16.1 millimeters (versus 59.5 x 56.1 x 18 mm for the GWG-1000). According to the case back, the GWG-2000 is a Carbon Core Guard model and has a sapphire crystal. The module number is 5678 (instruction manual link). 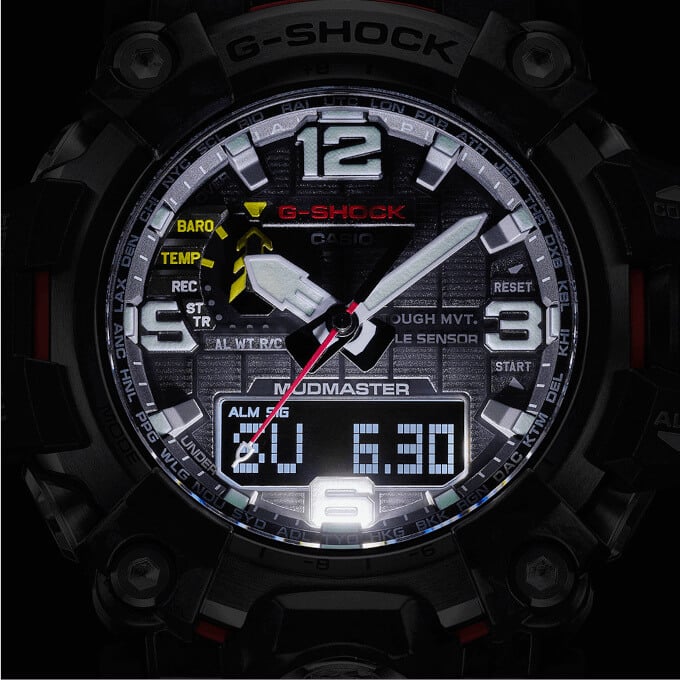 Another new element is the full stainless steel bezel. The resin band has an industrial-style non-slip texture, and the band keeper is resin. The lower band retains the “Mud Resist” and feature labels. The upper band has a “Forged Carbon” label, replacing the “Vibe Resist” label of the GWG-1000, and there is no mention of vibration resistance in the final specifications (although is it reasonable to assume it is vibration-resistant to some degree). 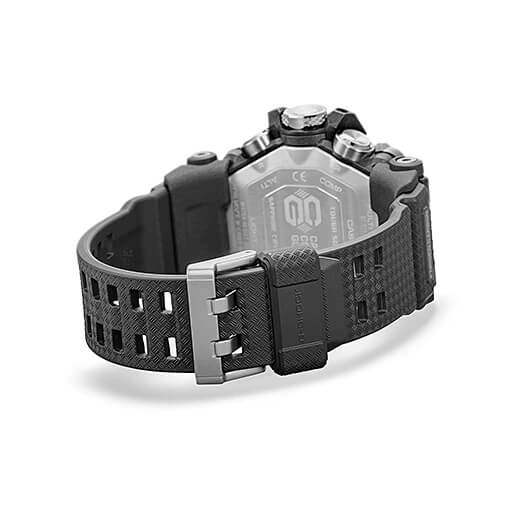 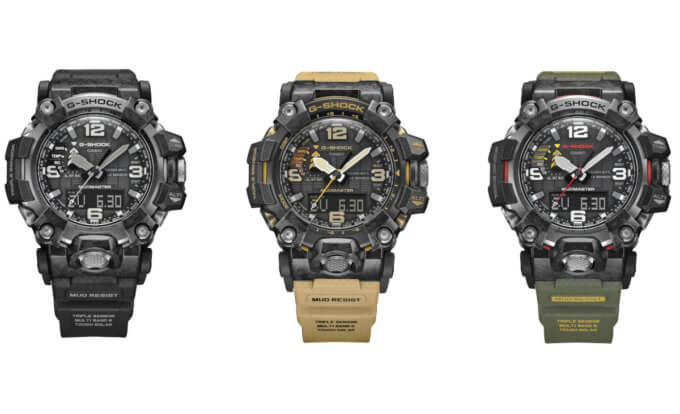 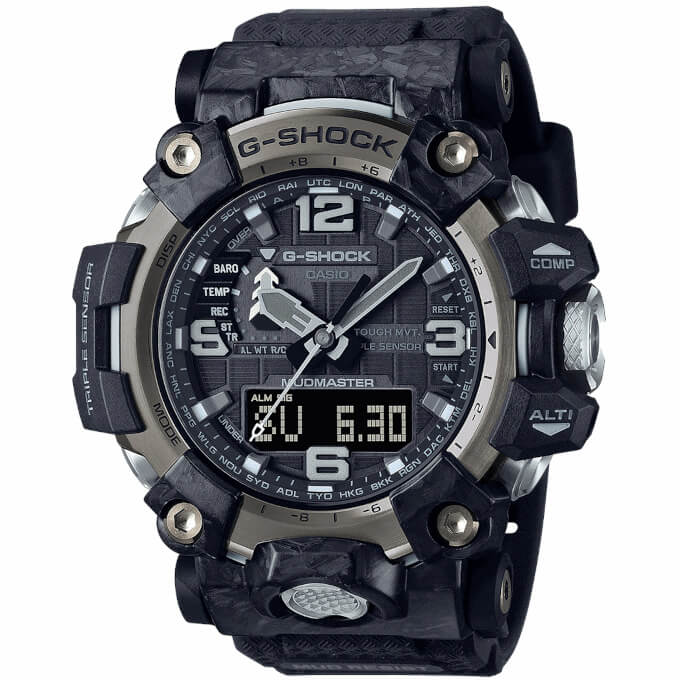 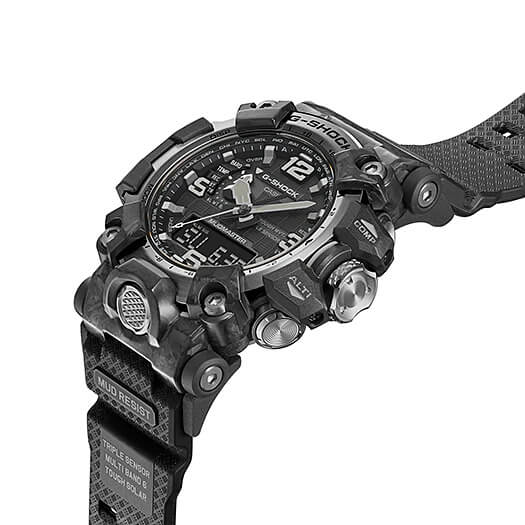 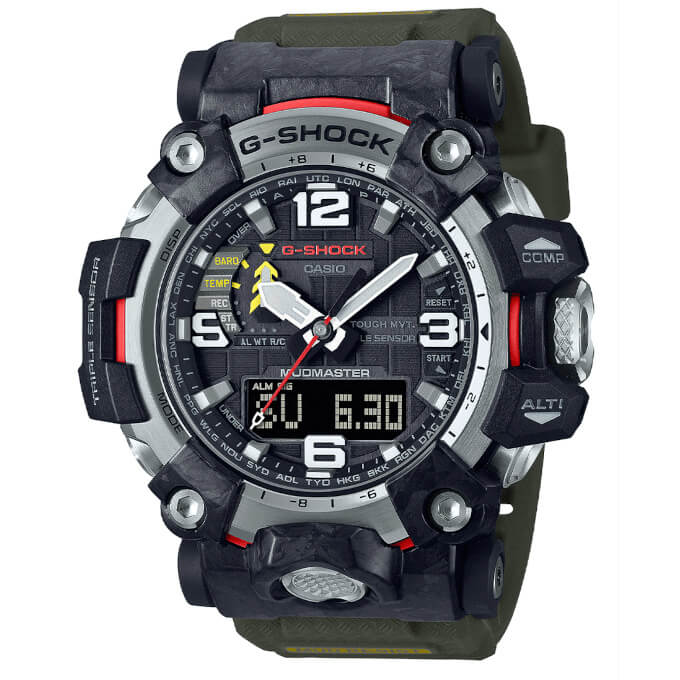 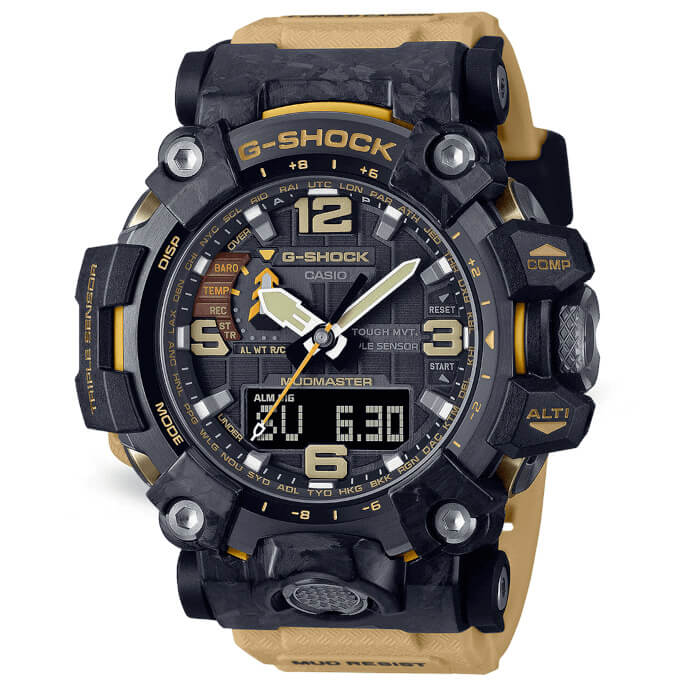 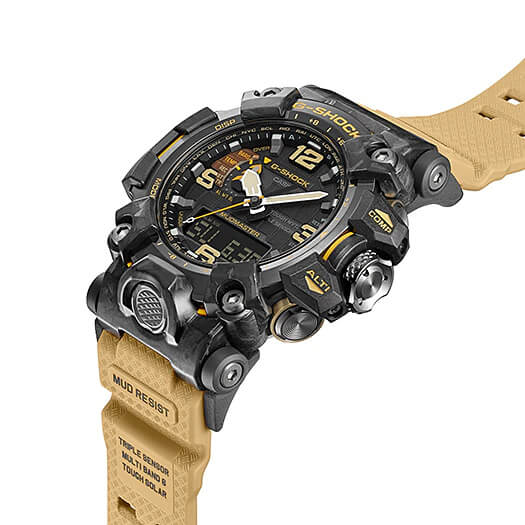 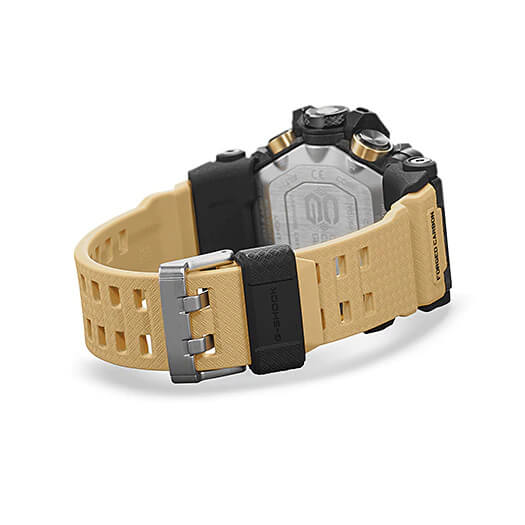 Is the GWG-2000 manufactured in Japan ? Thank you for your future answer 🙂

Many thanks for your reply ! Earlier this summer, I asked a japanese friend in the watch business more informations about the new mudmaster. He did not tell me anything, except that manufacturing cost for the new model would be much much lower compared to GWG-1000.

I have to admit that I am currently a bit disappointed by this release. Maybe the first reviews will change my mind, I will keep and eye on your great website. I have no problem paying 800, 1000 or more for a Made in Japan watch, no problem at all. However, when a product is manufactured in Thailand and sold at such a high price, I think twice before buying… Again, thanks sir !

You’re welcome. Some of the GWG-1000 models are also made in Thailand. I believe they started off being made in Japan, but are now made in Thailand (or possibly both Japan and Thailand).

Wondering if the bezel numbers mean we might be getting pressure alerts ala the final version of the Gulfmaster?

I might be missing something, but this doesn’t feel like much of an upgrade from the GWG1000?

Yeah it’s mainly a case and exterior update. I think going with “2000” maybe raised some people’s expectations too much.

Don’t forget that the 1000 has alpha Gel, which gives it the “Vibration Resist” designation. This one doesn’t seem to have that, which seems like a step backwards to me.

Thanks, the final specs are up and vibration resistance is not included.
https://www.casio-intl.com/asia/en/wat/watch_detail/GWG-2000-1A1/

On this link it says the watch has vibration resist

I don’t doubt that it is vibration-resistant to a certain degree (all G-Shock watches are), but we usually follow the Japan and casio-intl.com sites when it comes to official specifications.

Also, that Europe site says it has Alpha Gel, which I don’t believe it has. The GWG-1000 has Alpha Gel. The Europe and US sites have been prone to mistakes in the past. If the GWG-2000 had Alpha Gel, I believe it probably would have retained the “Vibe Resist” label on the band and “vibration resistant structure” would be listed in the Japan specs.

Nice watch shame it doesn’t have a carbon fibre bezel like some of the other Casio models.

That is probably coming later.

When should we expect a newer Rangeman?

Does the watch have an STN LCD display?
Why not do it with a positive display too?
Wake up Casio!
+ Made in Japan!!! 🙂

As far as I know, it doesn’t. STN LCD is not listed in any official specs or marketing material.

Fully supportive. What about a revert display that you cannot read in most of the conditions? By experience, the display is unreadable. I don’t understand why Casio does not provide, at least, one version with STN LCD. For those who will use the watch for real.