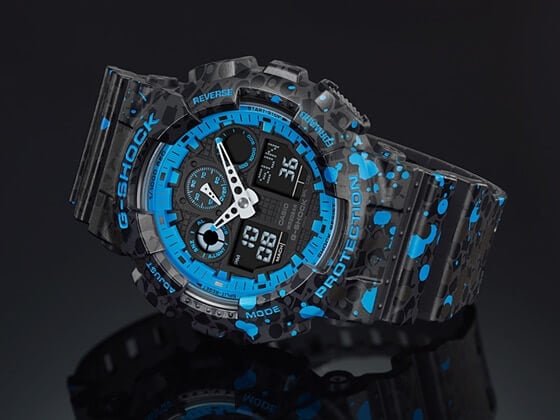 Casio G-Shock is teaming up with legendary New York graffiti artist Stash to release the GA100ST-2A limited edition watch. The custom GA100 designed by Stash features a black-on-black print of spray can caps on the bezel and bands along with a vivid blue dial ring, lettering, and splash pattern. The stainless steel case back is adorned with an engraved Stash signature logo. The GA100ST-2A comes in a unique spray can packaging that pays tribute to his artistic roots.

Stash was a prominent figure in the East Village art scene of the early 1980s, when he exhibited his canvases along side artists like Keith Haring and Jean-Michael Basquiat at the age of 17. Stash was also well known for his graffiti work on subway trains and has done commercial collaborations with companies such as Nike, Burton, Medicom Toy, and A Bathing Ape.

The GA100ST-2A has a list price of $170 and will be available at Concepts lifestyle stores in New York City and Boston from May 4-5, before making its worldwide debut on May 6. Casio also announced an Asia release for the GA-100ST-2A. 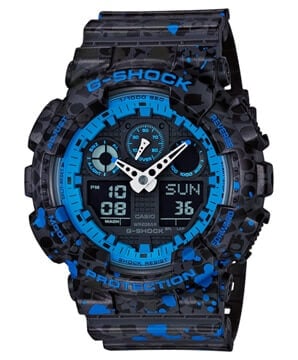 Casio AEQ-120W with Telememo, 10-Year Battery, 100M WR
Disclosure: G-Central is independently managed by fans and supported by ads. We may earn a commission on purchases from our links to Amazon, eBay, and Reeds Jewelers.