All G-Shock GR-B100 models have been discontinued

All models in the G-Shock Gravitymaster GR-B100 series are now in “end of production” status and have been discontinued, according to G-Shock Japan. The GR-B100 series launched in 2018 and features Tough Solar power, Bluetooth smartphone link, and an STN LCD display. It also has some unique features like the flight log function, 5 multi-function alarms including daily, one-time, and schedule (time and date) modes, and countdown alarms to count down the remaining days and hours to a schedule alarm.

Other than the three launch models, the only other GR-B100 models were the black and gold GR-B100GB-1A and the white and brown GR-B100WLP-7A, a Love The Sea And The Earth collaboration with Wildlife Promising.

When all models of a certain series are discontinued like this, it usually means the end of the series. The Gravitymaster GR-B200 series is still active, which features Bluetooth smartphone link and a Quad Sensor (altimeter-barometer, compass, thermometer, step counter). 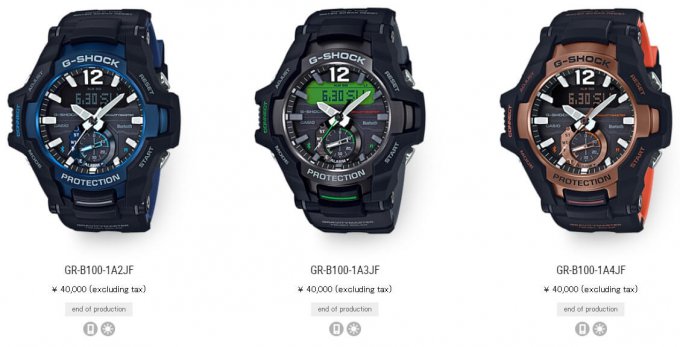 G-Shock Mudmaster GG-B100-8A & Gravitymaster GR-B200-1B: Black and Gray, First GG-B100 with non-inverted LCD
Disclosure: G-Central is independently managed by fans and supported by ads. We may earn a commission on purchases from our links to Amazon, eBay, and Reeds Jewelers.

not surprised at all.. they were lingering in sales based what I saw from the stores I went to look up for my Rangeman.