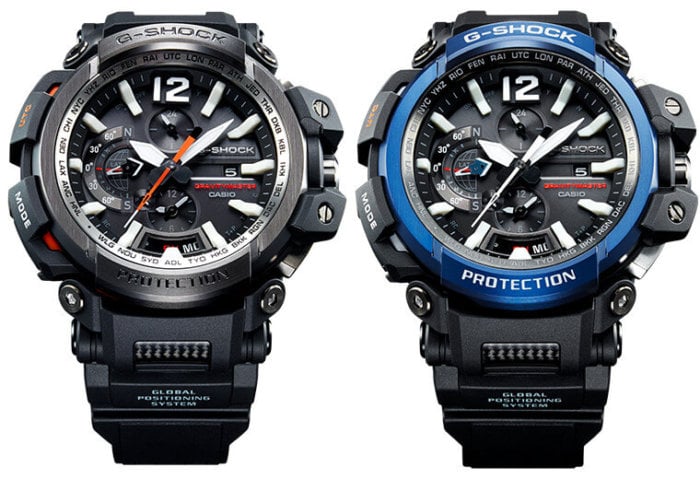 Casio has revealed the all-new G-Shock GPW-2000 Gravitymaster to be released in Japan on May 19, 2017. The GPW-2000 is the top G-Shock in the Gravitymaster aviation line. The major new features of this advanced high-end watch are Bluetooth connectivity and GPS positioning tracking. The debut models for Japan are the GPW-2000-1AJF and the GPW-2000-1A2JF with a blue IP bezel. (Update: Casio America is releasing the GPW2000-1A in May 2017 with a list price of $800 USD.)

GPS hybrid radio wave timekeeping was the major feature of the previous generation GPW-1000 Gravitymaster, and allows the watch to sync the time anywhere in the world. With 3 Way Time Sync, the GPW-2000 retains the GPS/Multi-Band 6 timekeeping feature and can now sync through time servers on the internet by automatically connecting to a smartphone at a preset time. The Bluetooth capability allows the watch to link to the G-Shock Connected smartphone app for automatic time adjustment, world time setting, and a flight log GPS mapping function. The app can also easily change the watch settings for the home time, alarm, and operation sound toggle. 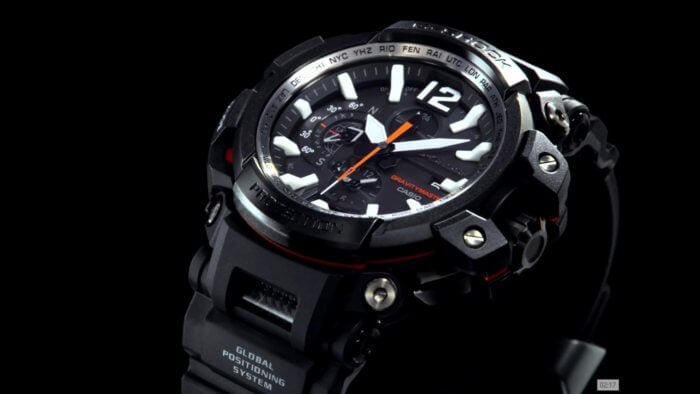 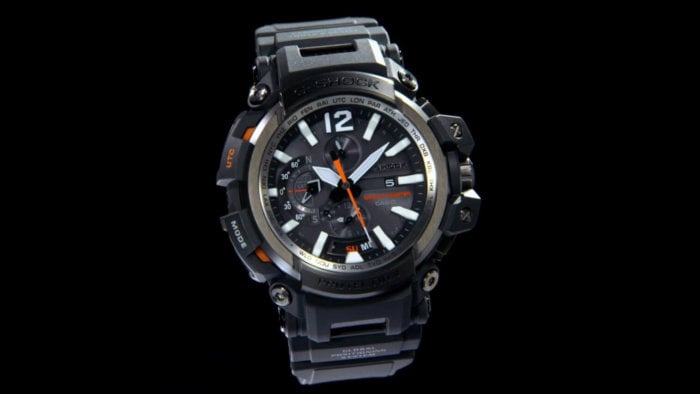 The GPW-2000 remains an all-analog Tough Solar-powered watch with an aircraft-inspired display featuring a world time subdial, a 24-hour subdial, and date/day displays. The GPW-2000 expands on the GPS hybrid timekeeping-only feature of other top G-Shock models like the MTG-G1000 and MRG-G1000 by also providing GPS positioning information. There are latitude and longitude displays at the 9 o’clock and 6 o’clock positions. There is also a flight log function activated by a watch button that records time and positioning information on the map of a connected smartphone. Casio America is calling this feature “Mission Stamp.” 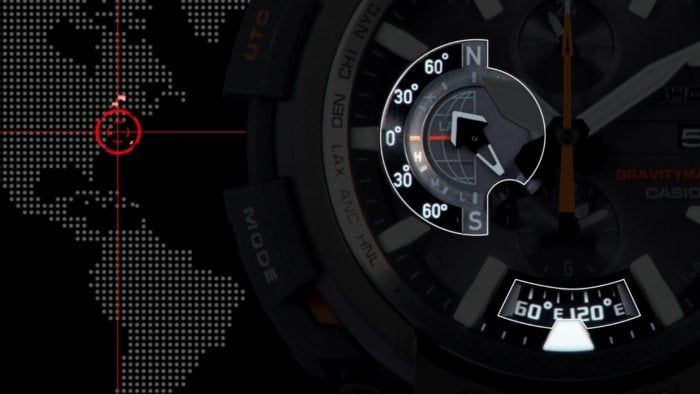 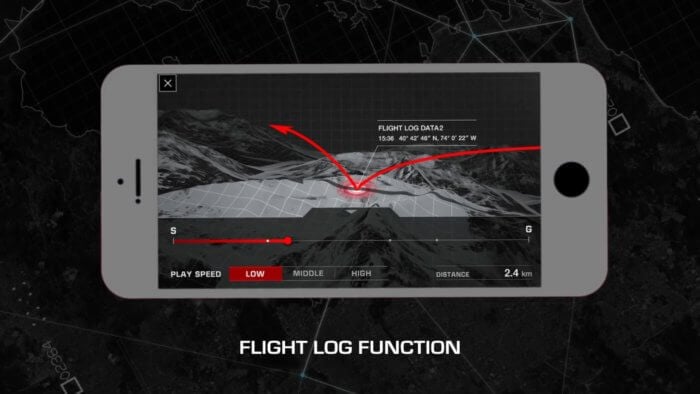 The GPW-2000 has a similar exterior structure yet somewhat sportier look than the GPW-1000 with more resin around the stainless steel bezel, and it remains almost the same size. It is slightly wider, thinner, and heavier measuring 66.0 x 57.2 x 18.2 mm and weighing 198 grams. The face has a similar look with its large 3D markers and subdials. The second hand is made of carbon fiber and the display uses sapphire glass with an anti-reflective coating. The resin bands have carbon fiber inserts and a metal strap keeper. A new feature is the screwless band attachment design to prevent the bands from coming loose due to vibration. The Triple G Resist structure provides protection against shock, vibration, and centrifugal gravity (g-force). The watch also has a JIS Class 1 anti-magnetic structure. 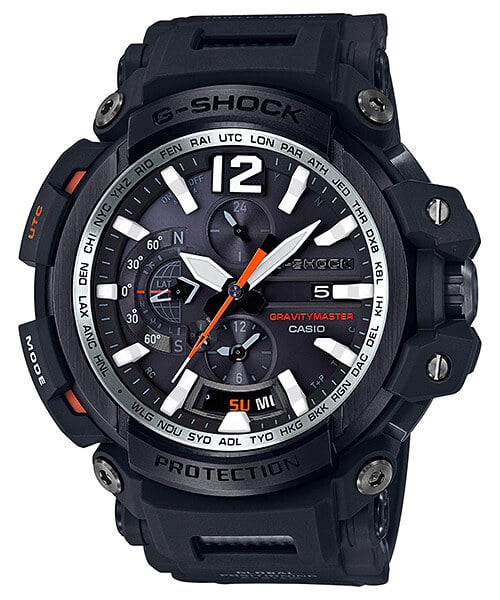 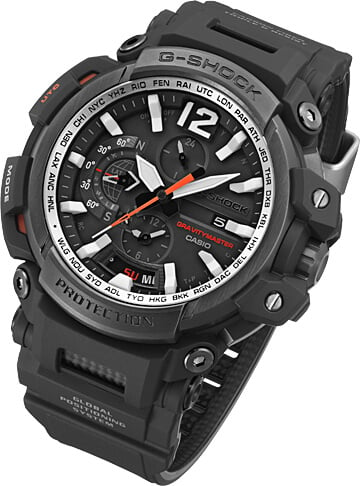 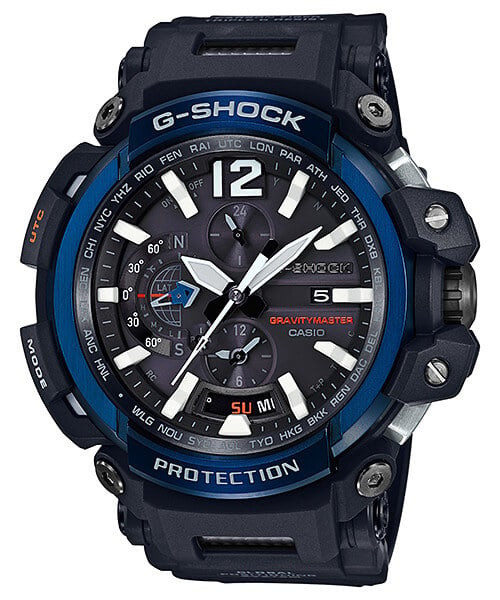 A third GPW-2000 model has also been spotted with olive green dual-layer bands with an orange inner layer. (Update: This is the GPW-2000-3A from the Master in Olive Drab Gravitymaster Collection.) 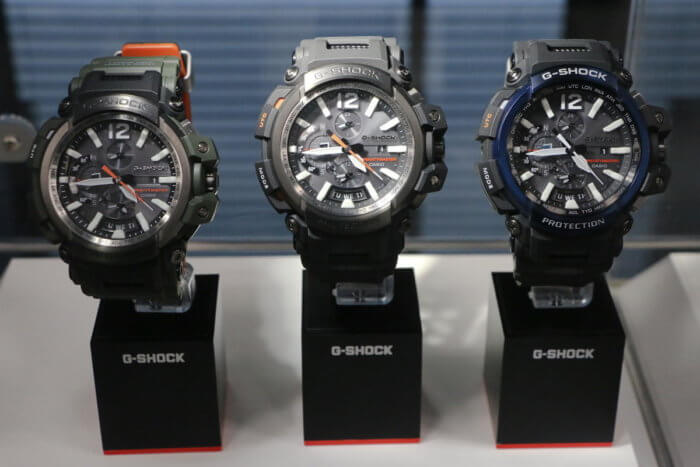 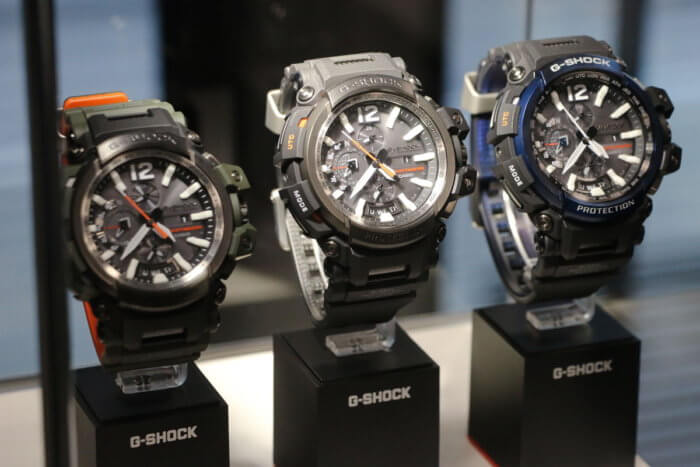 G-Shock Black and Gold Master of G Series: Gulfmaster, Mudmaster, Gravitymaster
Disclosure: G-Central is managed by fans and supported by ads. We may earn a commission on purchases from our links to Amazon, eBay, and Reeds Jewelers. Please follow your country's official G-Shock site for additional release information.

I bought a G-SHOCK GPW-2000-1A2 GRAVITYMASTER (blue colored) two days ago at this CASIO shop in Jem Jurong East, Singapore and was very impressed with its features and functions. However after synchronizing and familiarizing with the functions, i realized that the day at the bottom of the watch does not move. Initially, I thought I had performed the connection wrongly but even after having brought the watch back to the shop to get the date rectified, this problem still persists. I intend to bring it back today again but I am writing because I assumed that such a good watch should have been QC more accurately and precisely before putting it up for sale.
Disappointed customer,

If you look at your full product code, then google search for the ‘Casio product codes meanings’. Then you will see the last 2 letters will give you a reference of where the product was manufactured..ie Japan, Thailand etc….!
Some believe that manufacturing outside Japan is the reason for poor QC and will only buy Japan made stuff. the others think they are mad…what ever the truth I just love the product and think its the Ferrari of the Watch word,,,,and that’s hard to beat…!

Is it supposed to move?

Yes, to show the current day of the week.