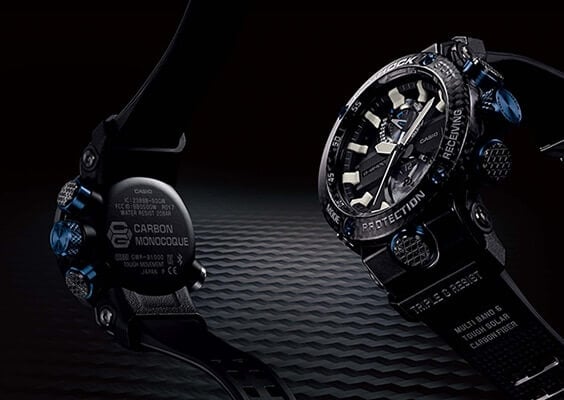 Outfitted with the new Carbon Core Guard structure, the carbon monocoque case is made of carbon fiber-reinforced resin and seamlessly integrates the case with the case back. This results in high strength as well as a lighter weight (about 72 grams) than any previous Gravitymaster model. The new case structure also has a modified circuit board plate that inhibits direct impact to the button shaft and circuit board. This eliminates the need for button guards and allows the button to be enclosed in a pipe fitting, increasing strength and making button operation easier. This also allows for a noteworthy new style that is more minimalist in its approach.

Other confirmed features include a carbon fiber bezel, carbon fiber insert band (with the carbon fiber visible on the outer band), spherical curved glass made of sapphire crystal, a screw-lock crown, and a dedicated stopwatch start button at the 2 o’clock position. All external metal parts are made of lightweight titanium, giving this watch the Rust Resist designation like the Gulfman. The watch is powered by Tough Solar power and has Multi-Band 6 radio-sync timekeeping along with the Bluetooth mobile link function which provides world time with 300+ cities, auto time adjustment, one-touch time adjustment, easy watch setting, and the phone finder function. The watch will also have the Flight Log function which records time and position information on the G-Shock Connected app and shows a graphical display of movement history.

The GWR-B1000 is significantly smaller than the GPW-2000 Gravitymaster: 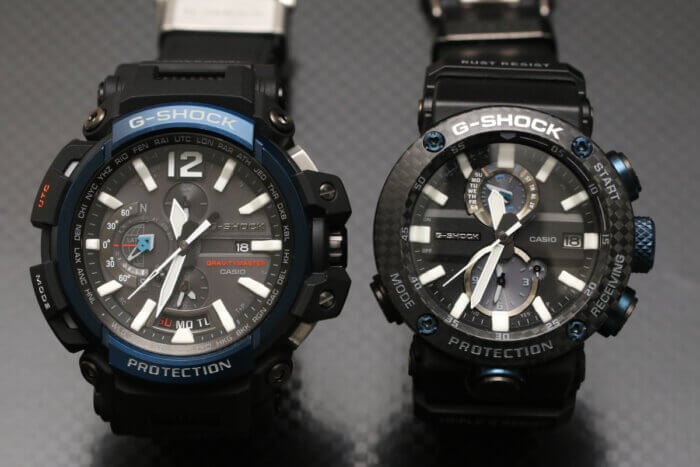 With its one-piece carbon monocoque case, the GWR-B1000 fits comfortably on the wrist: 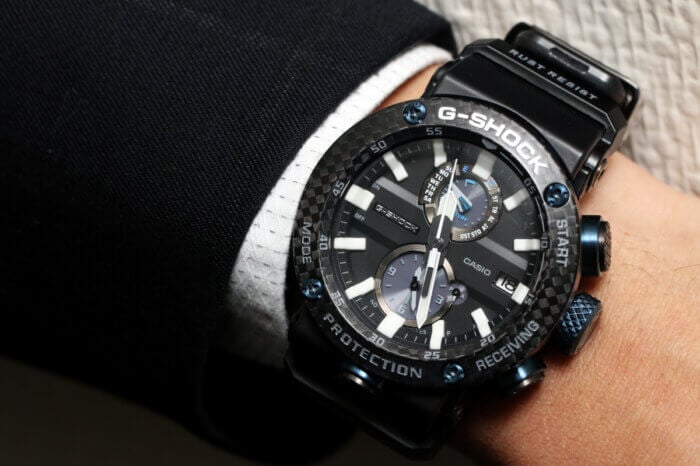 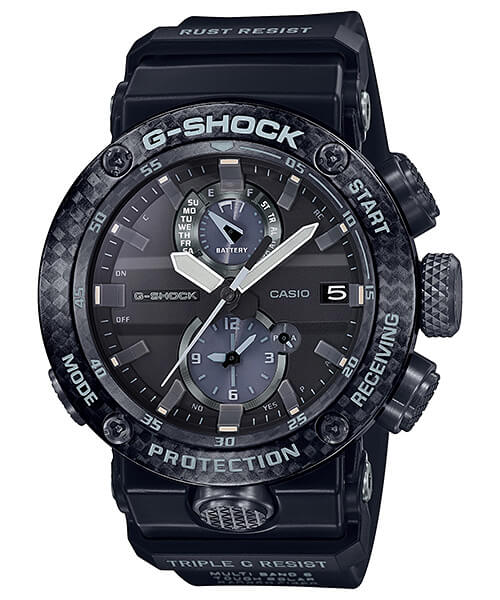 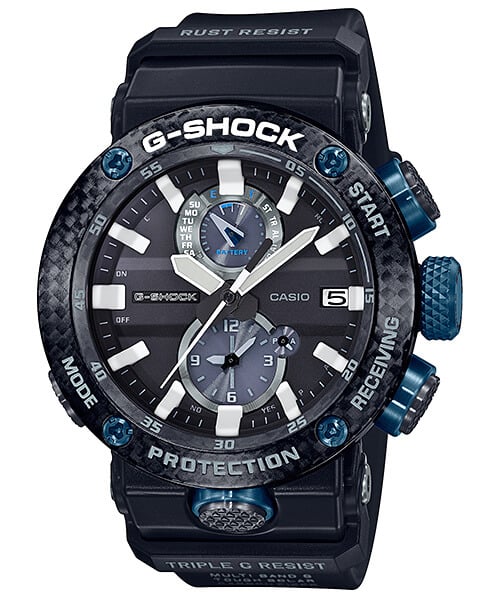 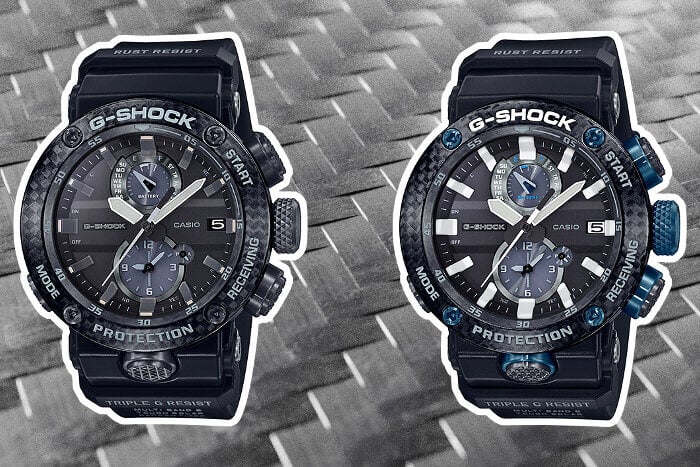 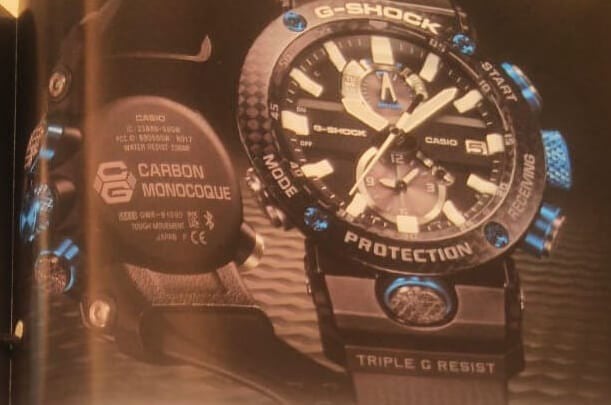 The arrival of the new year means that spring and Baselworld are approaching and we can start to anticipate some all-new G-Shock watches. The first new model to leak in 2019 is the analog G-Shock GWR-B1000 Gravitymaster with the debut models being the GWR-B1000-1A and GWR-B1000-1A1.

The design takes a cue from 2018’s G-Shock MTG-B1000 luxury model and has what appears to be a smaller case compared to the very large GPW-2000 Gravitymaster from 2017. Compared to other G-Shock aviation watches, the GWR-B1000 is not immediately recognizable as a Gravitymaster due to the new case style, though it does share the large analog hands and subdials that the series is known for.

The watch is labeled as “Carbon Monocoque” which is the first for a G-Shock or Casio watch. The term “monocoque” (which translates to “single-shell” in French) refers to a structural system where loads are supported through an object’s external skin (like an egg shell). Carbon monocoque usually refers to the chasis type of certain automobiles that use a single-shell structure and carbon-fiber-reinforced polymers. Carbon monocoque is a recent trend in some luxury timepieces where it is often referred to as a case material rather than a structural type. We’ll examine exactly what all this means for the GRW-B1000 later but it’s probably safe to assume that the end result is a smaller and lighter watch (with no case back cover) that doesn’t sacrifice the G-Shock toughness.

The GRW-B1000 also appears to have a carbon fiber bezel and carbon fiber-reinforced band (with the carbon fiber being visible on the front of the bands). Other features include Triple G Resist (protection against impact, g-forces, and vibration) and Rust Resist (which suggests that the watch may have titanium metal parts or maybe it is just referring to the carbon case). The watch has Tough Solar power and both Multi-Band 6 radio time-syncing and Bluetooth mobile link. It also has a front-facing light button which follows the trend that 2018’s analog-digital GR-B100 started for the Gravitymaster line.

One source states that the list price is $800 USD but that is not officially confirmed. We’ll be eagerly awaiting more information on this exciting new Master of G air model and will update this page as we learn more. 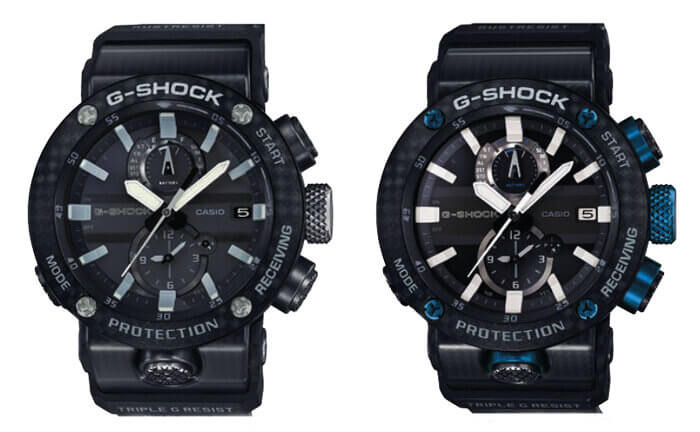 G-Shock GPW-2000 Gravitymaster with Bluetooth & GPS
Disclosure: G-Central is managed by fans and supported by ads. We may earn a commission on purchases from our links to Amazon, eBay, and Reeds Jewelers. Please follow your country's official G-Shock site for additional release information.

Wasn’t there a video in this article yesterday?

Yes, Casio removed it from YouTube but it is back up now.

I don’t know about an error, but on european g-shock site a new reference is present:
https://www.casio-europe.com/it/prodotti/orologi/g-shock/gwr-b1000x-1aer/

It reports about metallic parts with a 999€ cost. probably is the metal version

Thanks to G-Central I bought mine from Macy’s and saved $200! It is a fabulous watch and the pinnacle of the Master of G line. It works perfectly with the phone App and also synchs automatically with the Atomic Clock in Colorado. The only thing I haven’t been able to do is a manual synch with the Atomic clock despite 4 or 5 calls with USA Support. Even un-paired from my phone, it always tries to connect to bluetooth with the second hand pointing at ‘C’, never ‘RC’. Have any if you been successful getting it to enter manual synch mode? TIA

Is the bezel resistant to scratches

I believe it is. Casio states “Bezel with 52 layers of carbon sheeting – The bezel is made of carbon materials as well, making it highly durable and resistant to damage.” How it compares to the scratch resistance of a normal resin G-Shock bezel, I’m not qualified to say.

love this! but i’m looking for a ana-digi!

only got my first g shock (5610) around 6 months ago and already hooked!

Ideally my wishlist would be

carbon, multiband 6, solar (i love my 5610 for its use it and forget it qualities), and ana-digi.

I own recently my watch ladt month by ocarat. It’s a beautiful timepiece, it’s a gshock which can resist with almost anything. Though, I want to know how it react with chemical agent like hydrocarbure ( benzin, gasoil, inner..) or acid? I’m a mechanic.

Congratulations on your acquisition! I’m not sure that’s the G-Shock I would use for car mechanic work. I’d probably choose something thinner and much less expensive.

I wonder if you are meanwhile aware of nato adapters for this watch? I love wearing the watch but the “carbon reinforced” strap is a little stiff.

G-Central
Reply to  Tom A

I don’t know, you might want to try asking JaysAndKays.

What’s different between fake and original?
How to make sure when I buy gwr b1000-1a1 is a original one ?

Buy it from an authorized dealer.

The buckle and keeper are very light, and beautifully polished.
I suspect titanium with DLC coating, is anyone able to confirm this?
It’s a beautiful watch IMHO, doesn’t have the visual impact of the MTG models, but is equal in build and materials and so comfortable that it’s easy to forget it’s on.