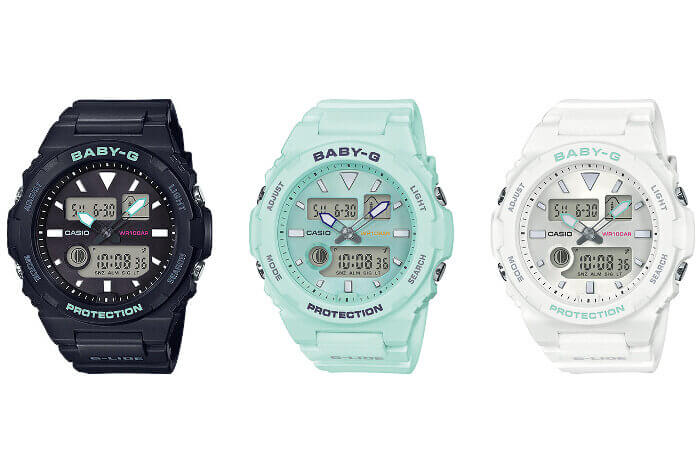 Recently spotted on the Casio Europe website is the new Baby-G G-LIDE BAX-100 series. This analog-digital model features tide and moon phase graphs on the LCD display. While other Baby-G G-LIDE watches like the digital BLX-560 and analog-digital BGA-180 also have a tide graph and moon age data (displayed as a number), the BAX-100 is the only Baby-G model that has a dedicated moon phase graph on the display and it also has moon age data.

Other notable features include the auto LED light switch setting which activates the light with a turn of the wrist, a second time zone setting, and three multi-alarms with a snooze alarm. In addition to the daily alarm, there is also a date alarm (to help remember birthdays or other events) and a monthly alarm for the same day and time every month. Along with its signature Baby-G shock resistance, the watch is water-resistant to 100 meters and is rated for swimming and snorkeling. Other features include a 1/100 second stopwatch (24 hours), 1/1 second countdown timer (24 hours), auto-calendar, 12/24 hour timekeeping, and an estimated 3-year battery. The BAX-100 measures 46.1 x 42.4 x 11.0 mm and weighs about 36 grams.

Casio Baby-G 2019 Spring-Summer Catalog
Disclosure: G-Central is managed by fans and supported by ads. We may earn a commission on purchases from our links to Amazon, eBay, and Reeds Jewelers. Please follow your country's official G-Shock site for additional release information.