A G-Shock watch with a tide graph and moon chart is a useful tool for a variety of outdoor activities such as surfing, fishing, boating, kayaking, and beach combing. While a tide watch is not meant to be the only resource for proper trip planning, it is a convenient way to have quick access to ocean conditions as it can give you the tide level and moon age for the current time as well as at a specific date and time in the future. Here are all the Casio G-Shock watches available featuring tide and moon data for all your beach and ocean needs.

The Gulfman G-9100 is known as the “Rust Resist” G-Shock with its external metal parts made of a titanium alloy. That combined with its tide and moon phase graphs make it a good choice for seafaring use. The Gulfman is a straightforward model that would serve one well on the job. It brings to mind the G-Shock lineup of the 2000s when G-Shock watches were still medium-sized and mostly digital-display models. 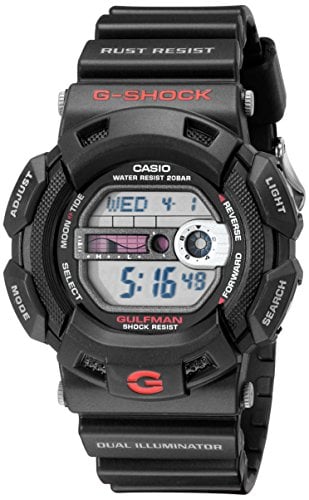 The G-Shock G-LIDE series is designed for action sports and the following models are part of its designated surfing line.

The GAX-100 series is a recent addition to the G-LIDE line. Housed in the popular GA-100-style large case, the GAX-100 is an analog-digital model with a tide chart and moon graph and also a thermometer sensor. 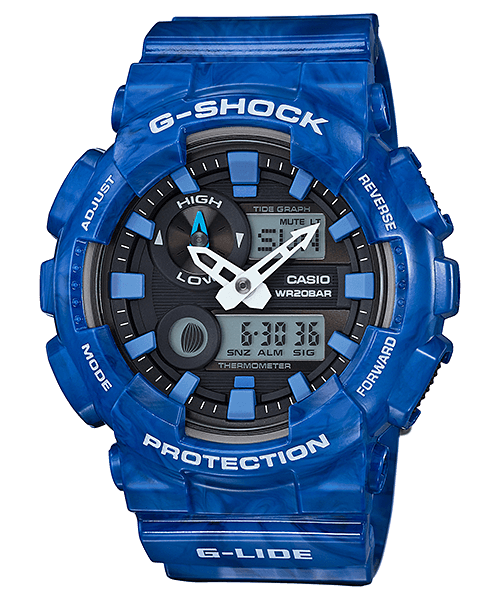 The GLX-5600 has a low profile of 12.7 mm which is considered very slim for a G-Shock. The tide and moon data will help surfers determine when the waves will be at their peak. The smaller size of the GLX-5600 also makes it a good choice for anyone who wants a tide watch that is as unobtrusive as possible. Also see the GLX-5600F Floral Series featuring a Hawaiian floral print motif. 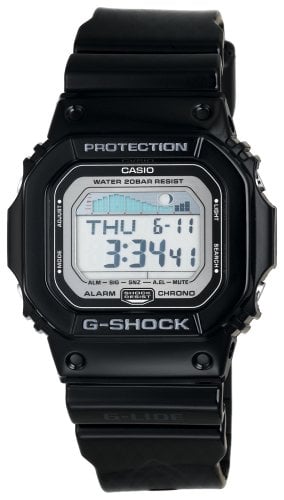 The G-Shock G-9700 G-RESCUEseries is designed for emergency and rescue workers. The large case and buttons allow the watch to be operated with gloves. The tide graph and moon chart make this series a good choice for coast guard personnel and boaters. 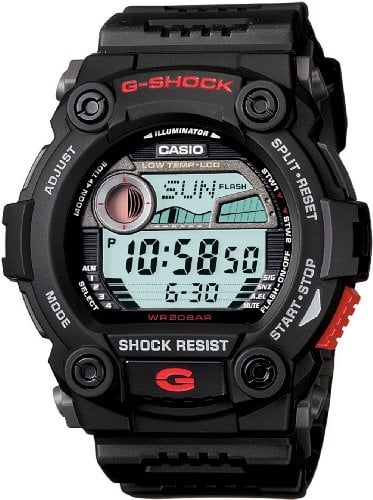 The GW-7900B-1 has Tough Solar and Multi-Band 6. Its dark reverse display gives it an extra-tough look though some may find it more difficult to view than a standard LCD display. 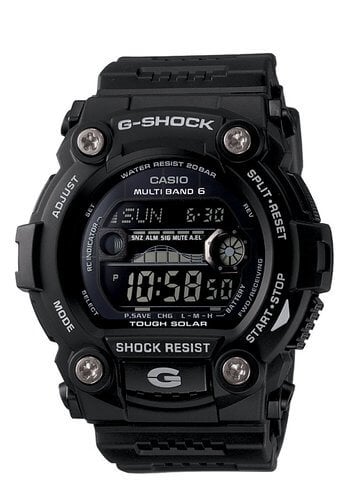 The Gulfmaster GWN-1000 is G-Shock’s flagship maritime model featuring a Triple Sensor (altimeter/barometer, compass, and thermometer) as well as a tide graph and moon age data. The GWN-1000 does not have a dedicated moon phase graph like the other watches on this list but it does display the moon age as a numerical value on the LCD display. 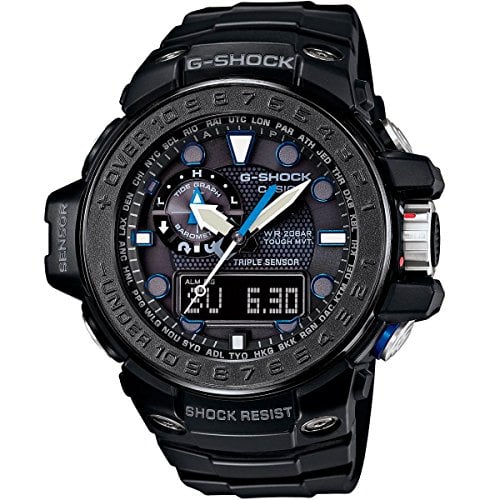 The Gulfmaster GWN-Q1000 is the latest Gulfmaster model and the first G-Shock with a Quad Sensor which includes a water depth meter, altimeter, barometer, compass, and thermometer. Other new features include sunrise/sunset data, a sapphire crystal. Like the GWN-1000 it has a tide graph and the moon age data is available on the LCD display.

The Gulfmaster GN-1000 is a more affordable battery-powered model with a Twin Sensor (compass and thermometer) and tide and moon data. It does not have Tough Solar or Multi-Band 6 like the GWN-1000 above, but it does have a dedicated moon phase display. 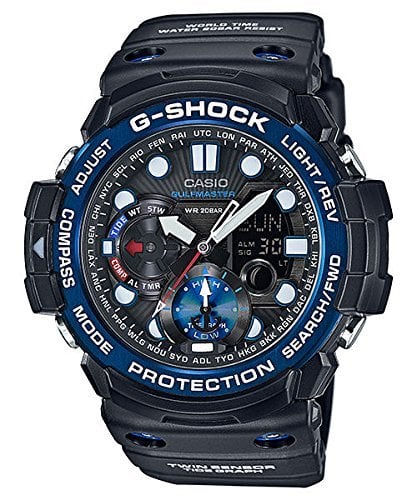 The GWF-1000 Frogman is G-Shock’s flagship diving watch featuring ISO 200-meter water resistance, Tough Solar, Multi-Band 6, and tide and moon graphs. The Frogman represents the top of the all-digital G-Shock family, has a full stainless steel body, and is manufactured in Japan. 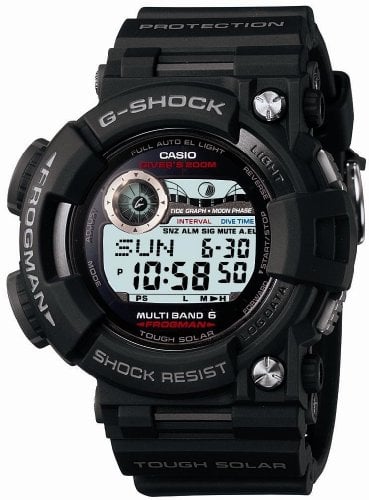 The latest Frogman has the previous features like ISO Diver’s 200-meter water resistance, stainless steel screw back case, Tough Solar, Multi-Band 6, and tide and moon graphs. It also adds all-new features like a water depth sensor, compass, and thermometer (all of which work underwater). Other enhancements include a sapphire crystal and carbon fiber insert band. 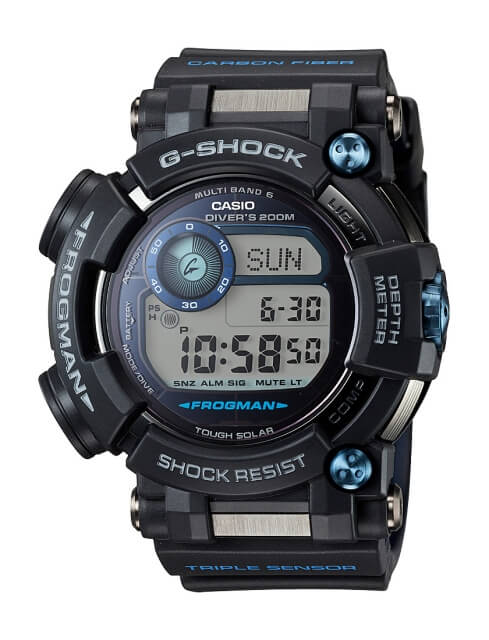