Hong Kong is probably the second best place for G-Shock shopping after Japan and is one of the more accessible Asian cities for English speakers. Unlike most cities, you’ll find big price discounts in many shops and rare collectible models for sale. I had the good fortune of spending some time in Hong Kong recently and found it to be an excellent destination for G-Shock buyers and collectors.

This G-Factory is the main G-Shock store in Hong Kong run by official Casio distributor Javy’s International Ltd. It is located close to the Sheung Wan MTR station and not far from the Central station. This store is like half a Casio watch store and half a G-Shock museum with a ton of rare and vintage models on display. From what I’ve heard these older models are prohibitively expensive here, but I’m not certain as I didn’t want to bother the staff too much. It might be the case that they don’t really want to sell the older models so they can keep them on display. As an official G-Factory store, the new models are sold at list price here. Even if you don’t plan on buying anything, this store is worth visiting to look at all the old G-Shocks.

This half of the G-Factory store is devoted to G-Shock and Baby-G, the other half has other Casio brands and more G-Shock watches: 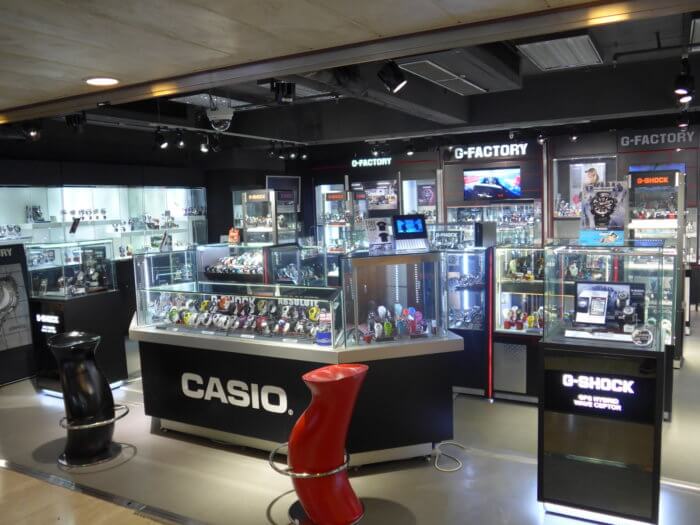 A collection of older Frogman models: 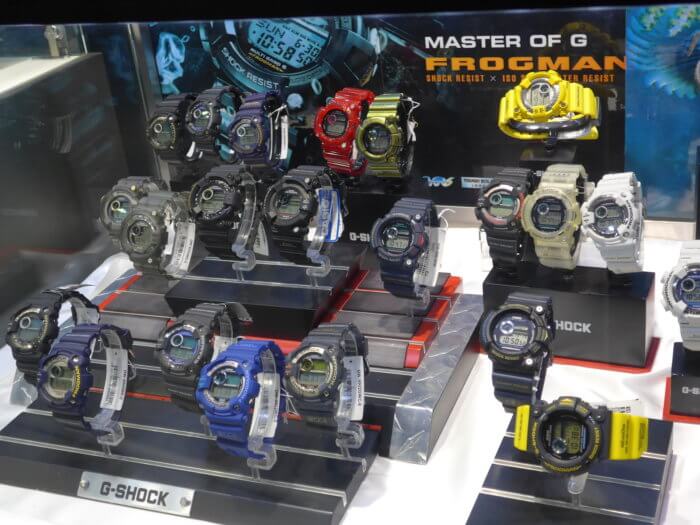 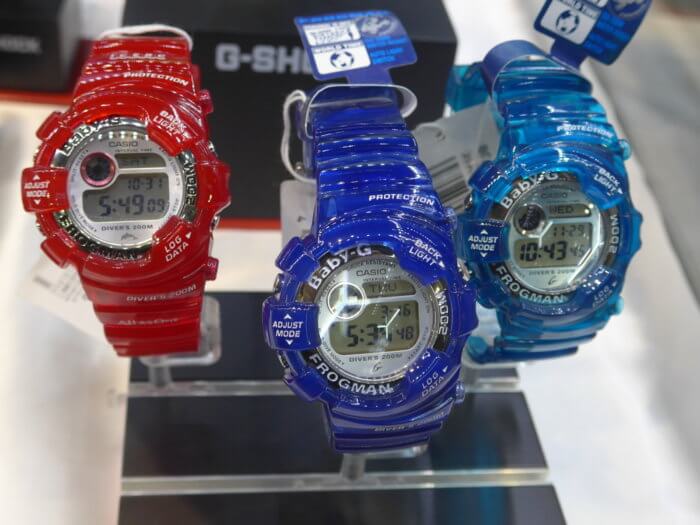 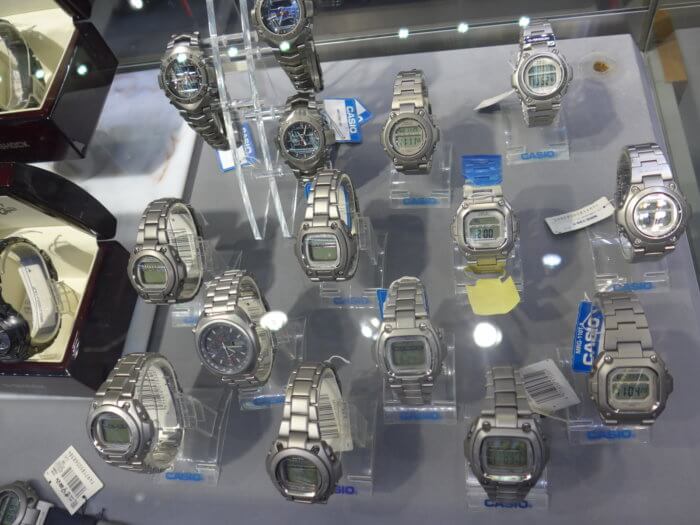 One older series that caught my eye was the GLS-5600KL, the black, white, and purple watches seen near the center and upper middle of this 5600 collection. This 2010 series has a very reflective, sparkly face known as the synthetic opal dial which is made by Kyocera and is quite unique. It needs to be seen in person under bright lights to be fully appreciated. 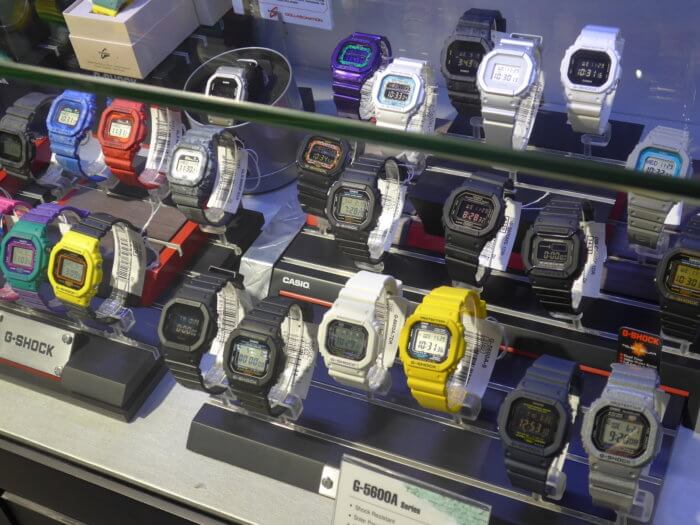 This G-Factory store on the Kowloon side also has some older and rare models but the focus is on the newer models here. Though not as large and impressive as the main G-Factory store, it’s worth a look if you’re in the area. I also visited this store in 2008 and I think it used to be the main store. 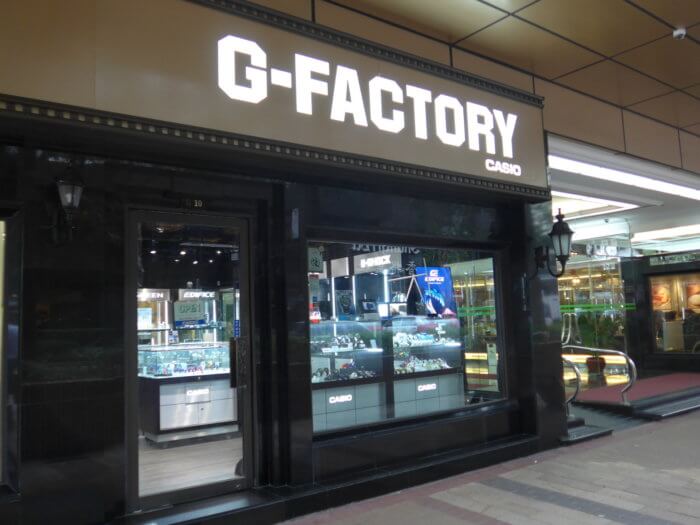 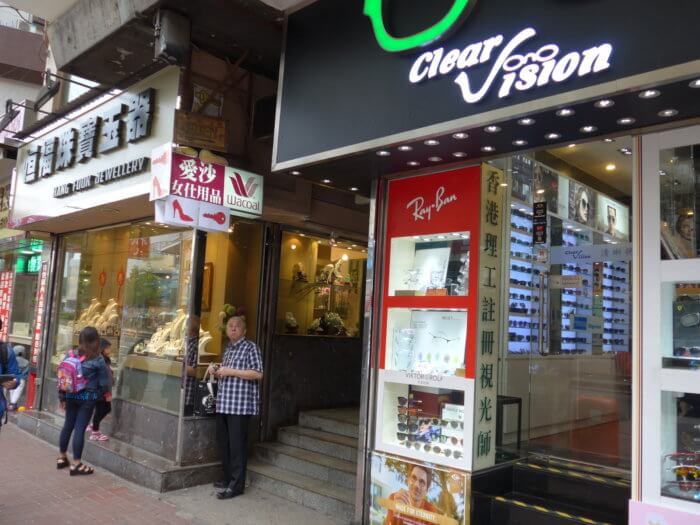 Go up the stairs to the left of Clear Vision on Jordan Road and you will find Watch Outz. 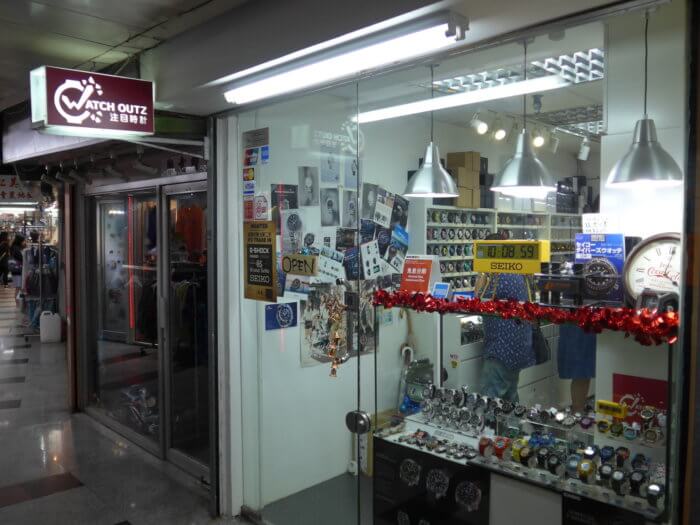 Watch Outz is probably the best known independent G-Shock seller in Hong Kong now thanks to a strong Facebook presence. This shop has a friendly and easygoing atmosphere with new releases and a lot of collaboration watches from Japan. It also has great prices on import and limited edition models and some collectible items for sale like the Frogman sculpture. It is one of the only places where I saw the GW-5035A-1 35th Anniversary Edition.

An excellent G-Shock collection at Watch Outz, can you spot the Brazilian Frogman? 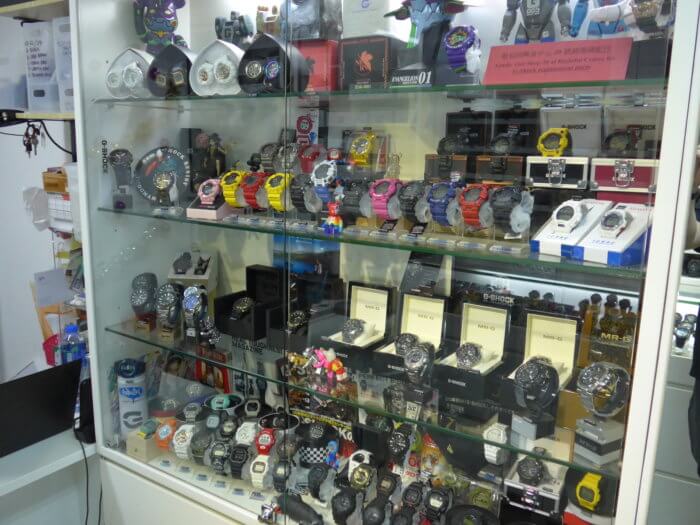 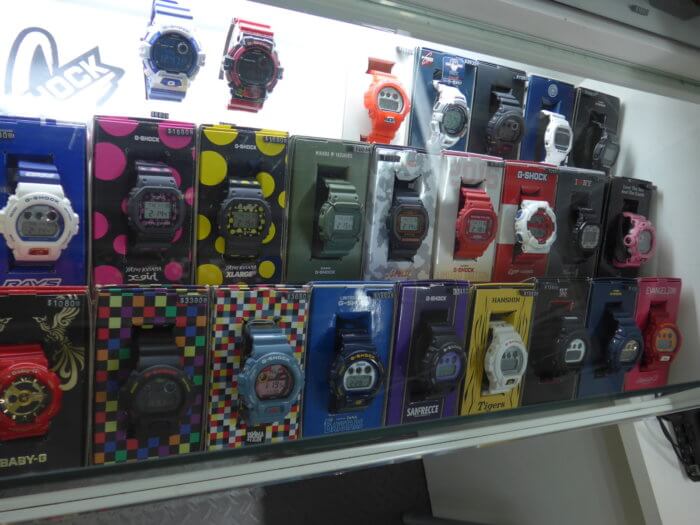 Mainly known for its anime and toy stores, Sino Centre has a handful of stores with an excellent selection of current and recent G-Shock, Baby-G, and Pro Trek watches available at discount prices. The prices are often better than what you would find on Amazon and eBay, so it is a great place for browsing and buying. Some stores like In-Watch Company (shop 21-22) have limited edition watches, Japanese imports, and older rarities. They also had some models from the Big Bang Black 35th Anniversary Collection and all three models from the Gold Tornado Collection. In addition to a huge selection of affordable models, I saw a lot of Frogman, Mudmaster, G-STEEL, and Gravitymaster aviation models throughout Sino Centre.

The watch stores with G-Shock watches are found on the ground floor of the Sino Centre. There is also one on one of the upper floors (shop 119). 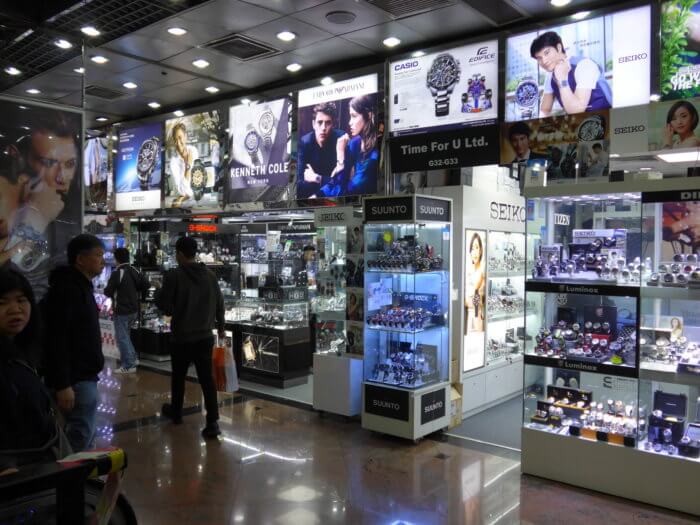 One of several G-Shock displays at In-Watch Company in Sino Centre: 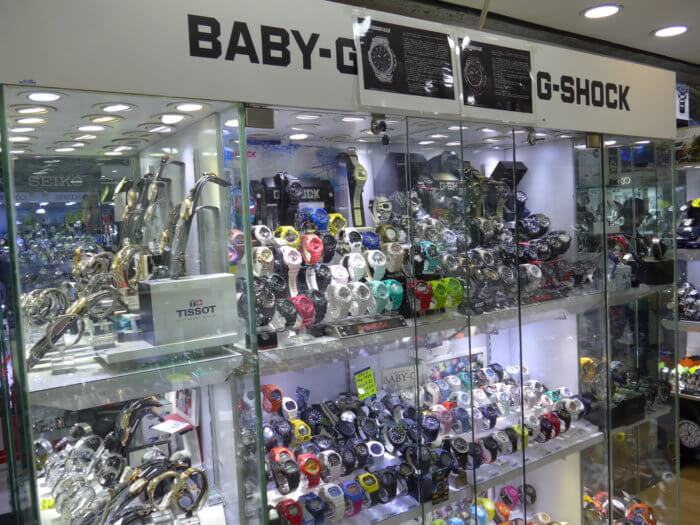 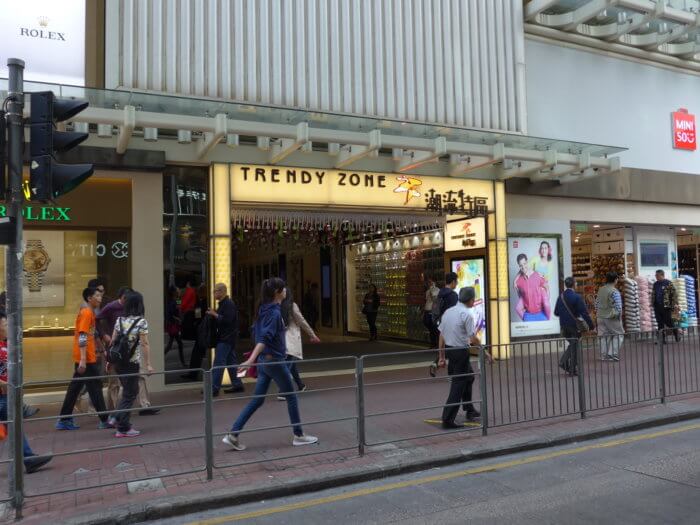 Trendy Zone is another mini-mall very close to Sino Centre that caters to streetwear fashion. Most of the stores in there open around 2 p.m. so don’t go too early. There are a handful of watch stores on most of the levels that have a good selection of G-Shock and Casio watches at discount prices. I saw specials such as the blue Gulfmaster GWN-1000-2A with standard LCD display (which is becoming much more expensive online) for as low as $1,880 HKD (~$240.64 USD).

Time2 in the basement level of Trendy Zone has a fine G-Shock selection: 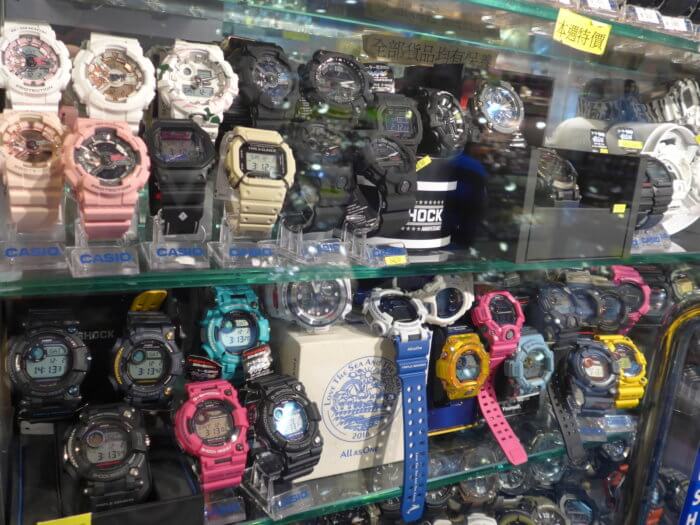 The previous stores are the best options for G-Shock collectors and bargain hunters, but you’ll also find G-Shock watches at many other stores throughout the city. Official dealer City Chain offers current G-Shock watches at its various locations. Watch stores with a wide selection of brands are likely to have some G-Shock watches, and you can find them in some electronics stores too.

As you can see, Hong Kong is a great place to shop for G-Shock watches. I was surprised at how low the prices were and how many Japanese models were available. The only disappointment was that I did not see any of the limited edition watches or models that are exclusive to China. (Update: Some of the boutique stores have started to sell these mainland China imports.) It is easy to visit all the stores and malls mentioned here using the MTR subway, and you can find them all on Google Maps. In Hong Kong, there is a good chance that you will find a new G-Shock for a better price than online, or that you will find a rare model for a fair price that would be much more expensive elsewhere. Whether you are seeking out the best bargains or hunting for rarities, Hong Kong offers something for all G-Shock enthusiasts.

G-Shock and Baby-G Shopping in Incheon Airport South Korea
Disclosure: G-Central is managed by fans and supported by ads. We may earn a commission on purchases from our links to Amazon, eBay, and Reeds Jewelers. Please follow your country's official G-Shock site for additional release information.

Great guide. I was in Hong Kong last month and visited each off these shops. Lots of choices!
Just an FYI that the prices in the G-FACTORY Sheung Wan were a lot higher than the others.

I also visited another shop on Nathan Road which was a few stories up in what felt like an office block, but I can’t recall the name at the moment. I’ll feed back if I remember!

Yeah I did ask about the GW-5000-1JF at the main G-Factory and the price was so outrageous I didn’t want to ask about any other watches after that and decided to leave that part out of the article. I’m sure there must be some other good shops I missed. If anyone knows any please share!

Hi,
Which store that you recommend can give you a good price?
Mind to share?

Are the watches in Sino Centre and Trendy Zone authentic?

It looks like the independent stores are starting to get the China limited editions.

Hello. I would like to get the John Mayer designed watch for my son in HK for X’mas but I don’t reside in HK. Can anyone advise the best way to go about it? Thank you.

It’s only being sold in North America, and it is sold out in the U.S. You might want to contact the Watch Outz store in Hong Kong to see if they are getting it and make a reservation. https://www.watchoutz.com/ Other than buying it on eBay, another option is to use a proxy shipping service to order it from G-Shock Canada https://gshock.ca/ when it is released there, but we don’t know when that will be, and we don’t recommend or endorse any specific proxy shipping company.

Thank you for your advice, really appreciate it.