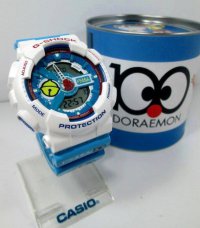 Casio Singapore made an unusual counterfeit warning about a fake G-Shock X Doraemon GA-110 collaboration watch being sold online from a source in Thailand. Casio stated that the unauthorized, modified watch violates its trademarks and that the warranty would be void. The company also warned of other similar fake collaboration watches. AsiaOne reported on this and included a photo of a very legit looking GA-110AC-7 (which is actually a real G-Shock [amazon page] that was unofficially nicknamed the “Doraemon G-Shock” because of its colors). This caused confusion and concern as it is usually easy to spot a fake G-Shock if you look carefully, but it turns out that photo was not the watch in question. The counterfeit watch can be seen here, and it is clearly a modified GA-110AC-7 that has the subdial removed to make room for custom graphics. We hunted down photos of similar fakes from the same source here and the amount is rather surprising. The craftsmanship is impressive but as Casio says these watches are unauthorized products. They violate the trademarks and copyrights of many companies and should not be offered for sale. As they have been opened and heavily modified, their usability and reliability may be severely compromised. Casio says that Rakuten Singapore is Casio’s only authorized online merchant in Singapore.