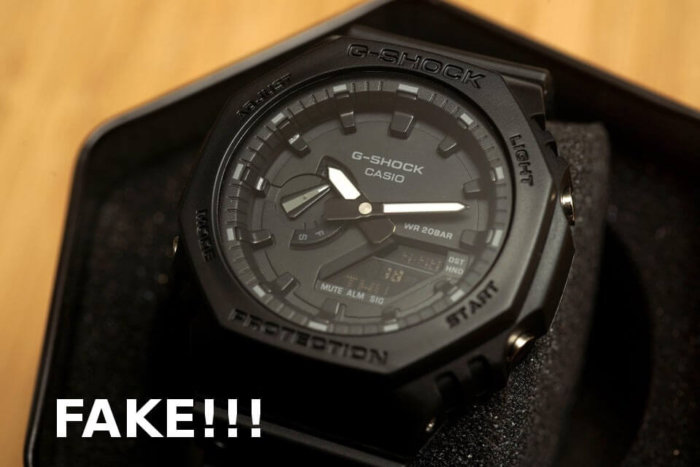 G-Shock is a commonly counterfeited brand because of its popularity around the world. The best-selling and sold out G-Shock GA-2100-1A1, nicknamed the “CasiOak” by fans, is one of the latest models being targeted by counterfeiters. Redditor Cefiro8701 reported that he received a fake watch after he made a purchase online.

At first glance, the fake watch may appear to be genuine. Upon closer inspection, it is apparent that it is a fake, with many of the details being faulty and the overall quality not being on par with a G-Shock. Cefiro8701 also created a useful picture guide to identifying a fake GA-2100-1A1 like the one he received. 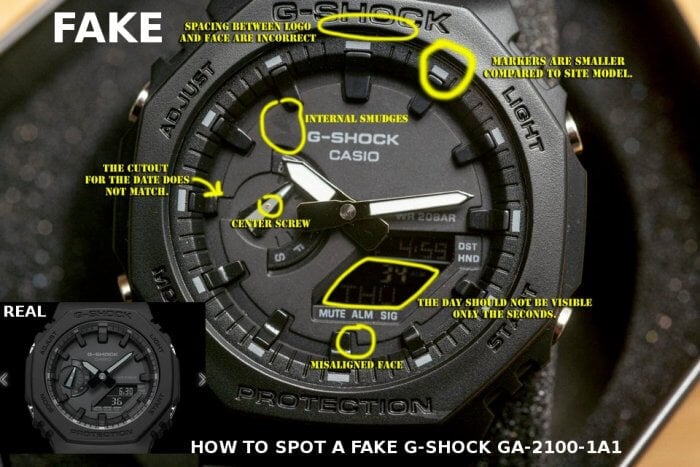 The fake GA-2100-1A1 may be encountered online and at unauthorized shops and market stalls, particularly in Asia. To avoid fakes, we suggest buying from authorized dealers, trusted retailers, and known sellers with a good return policy. Beware of watches being sold at shops with cheap goods. If a deal looks too good to be true, it probably is. Of course, some unscrupulous online sellers may use real photos to sell a fake, so it is best to avoid unknown sellers and websites.

(Also, we should point out that people have had bad experiences ordering this watch from online shops and then receiving a completely different model. We have seen one of the scamming shops show up as an ad on Google when searching for this model, so beware of unknown shops.)

We don’t give warnings about all the fake models out there (because there are so many), but the GA-2100-1A1 is particularly sought after, and we don’t want people to act rashly if they come across these fakes. The GA-2100-1A1 has been sold out since late 2019. In the U.S., it was reported that more stock would be available by March, with a complete restock in April. However, that doesn’t seem to be likely at this point, and one dealer has reported that he is not expecting more stock until June 2020. As it is such a popular model, we will make a new post when it is available again at authorized retailers.

In the meantime, the GA2100SU-1A (camo bezel) and GA2110SU-3A (green and black) Utility Color editions were recently released and are available, along with the GA-2110SU-9A (yellow and black) outside the U.S.

Metal-covered G-Shock GM-2100 is not a Carbon Core Guard
Disclosure: G-Central is independently managed by fans and supported by ads. We may earn a commission on purchases from our links to Amazon, eBay, and Reeds Jewelers.

Thank you so much for this article. I personally went through a bad experience trying to buy a GA-2100 last year. I found what I thought was a reputable seller on Black Friday and ordered a GA-2100 at list price. After a wait of about 7 weeks the watch that arrived was a GBA-800. In notified the seller and they only wanted to give a 30% refund and have me keep the wrong watch. A classic bait-and-switch. After several emails I resorted to filling a PayPal dispute and was eventually refunded 75% and kept the GBA-800 that I gave to my young adult son. Now 4 months later I’m still in the market for a GA-2100 and with this information in feel I will get a genuine article.

Thanks for sharing your experience. I have heard of that scam before, and I actually saw an ad for one of those scam shops on Google when searching for this watch. I forgot to mention that in the article, but have now updated it. I think gshock.com will be the first place to get a restock in the U.S. https://www.gshock.com/watches/analog-digital/ga2100-1a1

this sounds like the same situation I am going through now. The guy started at 30% then 40% and eventually 60%. I told him I want 100% and filed a dispute with paypal as well. But he sold me a fake watch that looks exactly like the fake one in the article. I am hoping paypal will come through on this one.

I’ve come across about a dozen fakes g shocks, so here’s what I usually see:

The fakes almost always have smaller screws on the back. G-shock always have the wider, pancake flat Phillips head.

The back is often missing module and model number, or not stamped around the ring. Back is also stamped tin or aluminum instead of stainless steel.

Fonts on bezel or face just don’t look right. Very often the Casio is off and spacing is bad.

In hand is when you really notice, cheap plastic feel, often much lighter. And of course going through settings, since they won’t have as many features.

Opening the back is the sure giveaway, you can see it’s a shoddy chunk of (usually) white plastic with a 2 cent battery screwed down.

I’m not surprise. I’hv came across fake Gshocks several times. From budget Casio until premium class such as Oceanus. Only the main functions & buttons’ assignments were different.

I am a bit of a newbie, but are there any pointers on how one should spot a fake gshock? Say a GMWB5000?

We suggest purchasing from an authorized retailer.
https://www.gshock.com/support/authorized