Update: Many users reported inaccuracies with the tide graph function on the GBX-100. On November 12, 2020, Casio stated that the problem was fixed with the latest version (1.10.0) of the G-SHOCK MOVE app.

The GBX-100 series is now officially listed as a May 2020 release in Asia and a June 2020 release in Japan. Clearing up some uncertainty from before, the watch has a 1-second increment stopwatch and not 1/100-second as mistakenly stated earlier on the casio-watches.com page. The watch has a 3-axis accelerator for step counting, which allows it to measure distance, speed, and pace, as well as to calculate calories burned. Unlike other G-Shock watches with tide graphs, the GBX-100 displays the actual height (in centimeters or feet) of the high and low tides.

The watch works with the new G-Shock MOVE smartphone app like the GBD-H1000 and GBD-100. According to the instructions, the watch is also capable of displaying smartphone notifications, including incoming and missed calls, email, SNS (social networking services), schedule, and “other.” The GBX-100 also has vibration alerts.

The instruction manual is now available at support.casio.com. See the full specifications listed below. 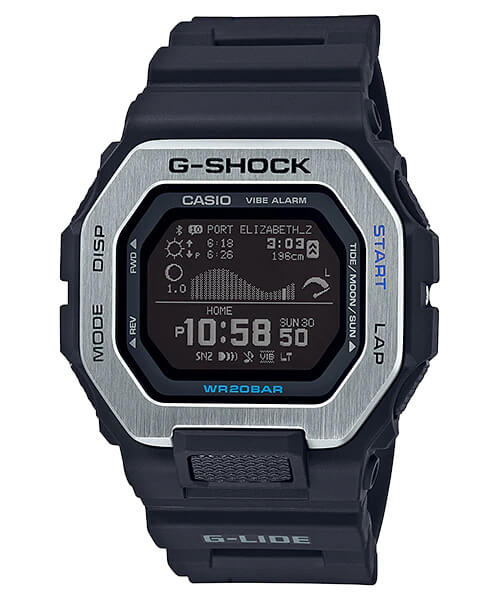 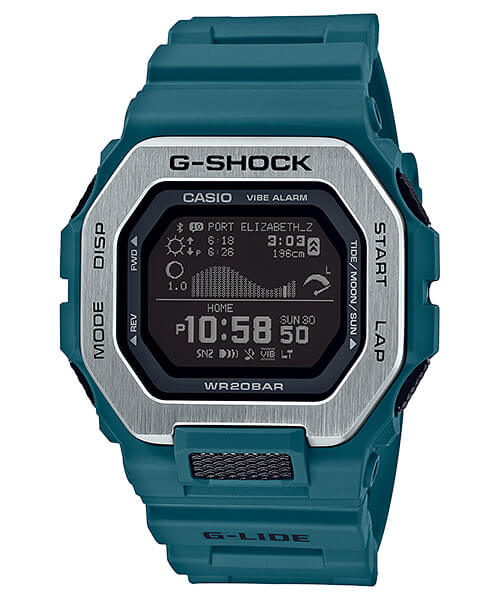 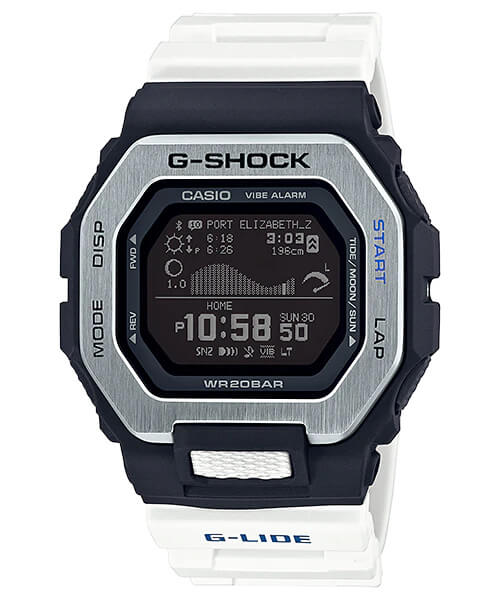 Visit casio-intl.com for the complete specifications.

Second Post: The GBX-100 has a stainless steel bezel with a hairline and top honing treatment, and the rest of the case is resin.

Tide information is available for 3,300 locations through the smartphone app. The GBX-100 also has training measurement functions like the G-SQUAD models, including distance, speed, pace, lap, and pitch. Other fitness features include a preset calorie use alarm, training log, and life log. The watch also has a soft urethane band.

A GBX-100 product page at casio-watches.com lists “Step Tracker” as a feature, which makes sense considering the fitness measurement functions. 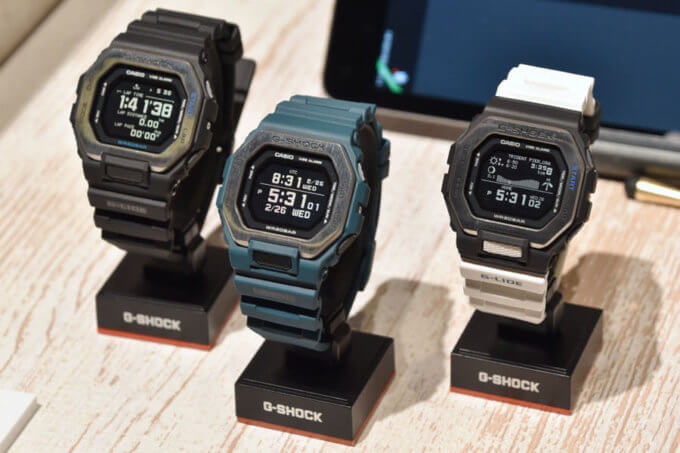 In recent years, Bluetooth connectivity was a rising technology in G-Shock watches that is now a common feature in many models. In a few years, we might be saying the same thing about the memory in pixel (MIP) LCD displays on such models as the Rangeman GPR-B1000, G-SQUAD models GBD-H1000 and GBD-100, and now, the G-LIDE GBX-100.

Unlike the round displays of the previous MIP LCD models, the GBX-100 has an octagonal shape that is squarish in appearance. The watch also appears to have a metal bezel and a front button.

The watch also has vibration alerts, which is labeled as “Vibe Alarm” on the face. 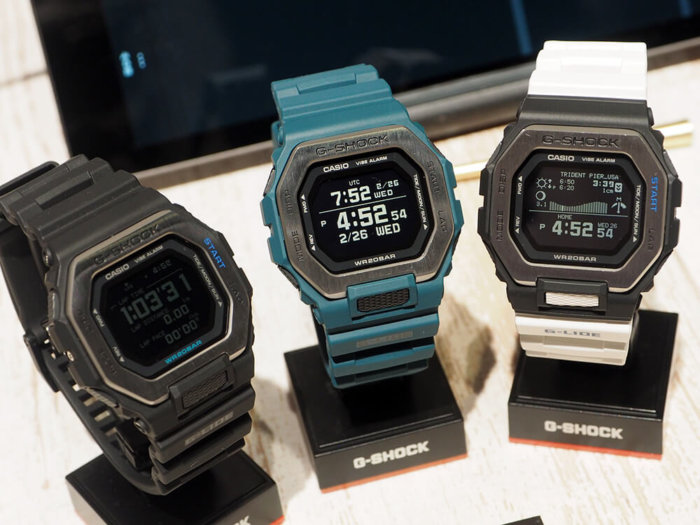 Upcoming G-Shock Watches for April 2021
Disclosure: G-Central is managed by fans and supported by ads. We may earn a commission on purchases from our links to Amazon, eBay, and Reeds Jewelers. Please follow your country's official G-Shock site for additional release information.

Give me that with Multiband 6 and solar!

Yes tough solar and maybe an option to reverse the display would make this a must for the collection
Or even better this module with tough solar in a GMW-5000 body!!!!
Insta buy!!!

I guess the 80s were calling Casio and wanted their LCD screens back. I’d to see more watches updated to the new MIP LCD, definitely a step in the right direction.

Good but not great news . Good because Casio starts to listen to their customers and begins to improve LCD in G-Shocks. Not great because they should have started offering such displays at least 5 years ago. I was planning to buy GMW-5000 next month but I will hold my horses now and wait a little for MIP LCD in the metal body. Maybe it won’t take them to long to present us such a watch.

I think it will be look great on frogman

A new online article for GBX-100 has been published.
The bezel is composed of a combination of resin and metal. Using SS (stainless steel) with hairline treatment and honing treatment on the top part, it balances strength and texture.
In addition, the center button is located at 6 o’clock, and the usability unique to G-SHOCK and the comfort of wearing a soft urethane band are considered.
(https://news.mynavi.jp/article/20200304-casio2020spring1/)

Thank you, some new info there.

Yesterday while updating some clients info, took a dive in the WIPO trademarks database. There’s a USPTO application for G-LIDE with smart watch features.

Thanks, I think this is probably the model that those categories are referring to.

The display is a very welcome feature, looks nice and very easy to read. Am I wrong to guess that Casio will be ditching the EL backlight in favor of LEDs on this one? It would be cool to have that greenish blue colored LEDs to light the display. It can be on my wishlist as long as I don’t rely on my smartphone all the time to use those extra functions.

My guess is that it will be the same as the GPR-B1000 Rangeman, which has an LED backlight which lights up the background. You can see that model’s light in this video. https://youtu.be/NR_AI_e370I?t=35

What exactly is the MIP LCD? Is the legibility better than a STN display?

It means “memory in pixel” and power is only used when an individual pixel is changed, not when it remains static. I would say it is comparable to an STN display, perhaps better due to its size. Regarding the GPR-B1000 Rangeman, people say it is easy to read, has good contrast, and that the inverted-style is not an issue.
https://www.youtube.com/watch?v=NR_AI_e370I&t=25s

Unfortunately the pace function can’t be accurate enough based on the accelerometer I guess..

There is a video for the GBD-100, which has similar features, that says if you connect the watch to a smartphone when using the the step counter, it will use the phone’s GPS to calculate your stride and make the step counter (and therefore distance and pace measurement) more accurate, including when you are not connected to a smartphone in the future. I would expect the GBX-100 to have the same feature, but I did not see this feature mentioned in the instructions for the GBD-100 or GBX-100.
https://www.youtube.com/watch?v=7qL0JBtNR2k

But yeah, it is not going to be as accurate as a watch with GPS. If the running and training features are a priority, then the GBD-H1000 with GPS and heart rate monitor is a better choice.
https://www.g-central.com/g-shock-g-squad-gbd-h1000-with-heart-rate-monitor-and-gps/

HEYY, such a nice watch!! Shut up and take my money!!! hahaha

Im glad Casio go with this screens with MIP technology. Awesome design. One question. Do you think it will have thermometer and barometer such as the GBD-100?????

Looking at the manual, I noticed it only has a 60-minute countdown timer, rather than the more-standard 24-hour CDT. Sometimes I need a 2-3 hour CDT. One can use the auto repeat feature to get more time, but that’s not as convenient.

Also, I noticed the moon phase graphic can’t be set for the southern hemisphere. The 10-year-old GW-9110 and GWX-5600 can do this. Somebody missed the boat on this feature.

According to someone who tried it, the watch automatically flips the moon phase graphic to the correct orientation for Southern Hemisphere locations.

and what about the notifications? can u read the whatsapp or email notification?? or just know that u have them?

Not sure about Whatsapp. For email, it looks like it shows at least the sender, subject, and an excerpt of the contents.
This video is the GBD-H1000, but I would expect it to work the same way.
https://www.youtube.com/watch?v=_rL6eVMkyF8

Stick tough solar on this and take my money!

Not really keen on a non solar model though.