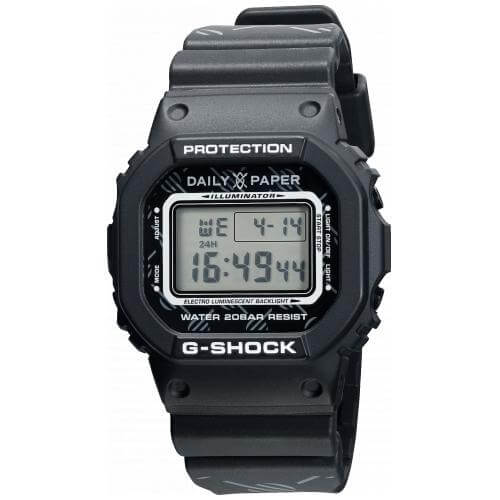 The G-Shock DW-5600DAILY21-1ER, a collaboration with Amsterdam-based Daily Paper, is coming to Europe soon. Daily Paper produces clothing for men and women that is inspired by the African heritage of its founders and wrapped in contemporary designs. Offering two collections per year, the brand started as a lifestyle blog in 2008 that occasionally sold t-shirts and has since expanded to include other forms of casual wear, athletic wear, dresses, blazers, and accessories.

The black DW-5600 has a face adorned with a Daily Paper logo, an exclusive print pattern, and a white border around the LCD display. The watch has black IP buttons, and the pattern is also printed on the band.

There hasn’t been a full announcement yet, other than a basic listing at Casio Europe, but the watch will likely be announced at dailypaperclothing.com and should be available across Europe.

Update: G-Shock U.K. has the watch listed as coming soon with a price of £129.