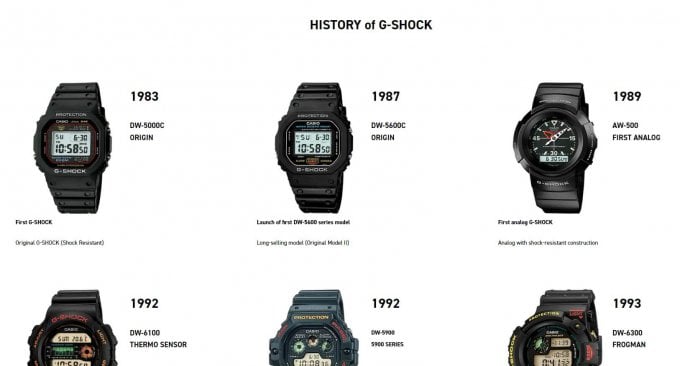 The official G-Shock U.S. website, along with other official country sites, has a history page featuring a video with creator Kikuo Ibe speaking about the development and evolution of G-Shock. The page also has a list of images and descriptions of the most significant G-Shock watches released over the years. Many popular models and lines go way back, such as the first DW-5000 from 1983, DW-5600 from 1987, Frogman from 1993, and DW-6900 from 1995. The list also includes more recent Master of G lines like the Gravitymaster, Rangeman, Gulfmaster, and Mudmaster, as well as recent models like the GA-2100, which has already become a modern classic. Though older fans will be familiar with most of these models, the list offers the uninitiated some insight into the watches that hold a special place in the hearts of minds of fans and the company itself. It is also a testament to how G-Shock constantly innovates by adding new models and features, which we will continue to see in the months and years to come.