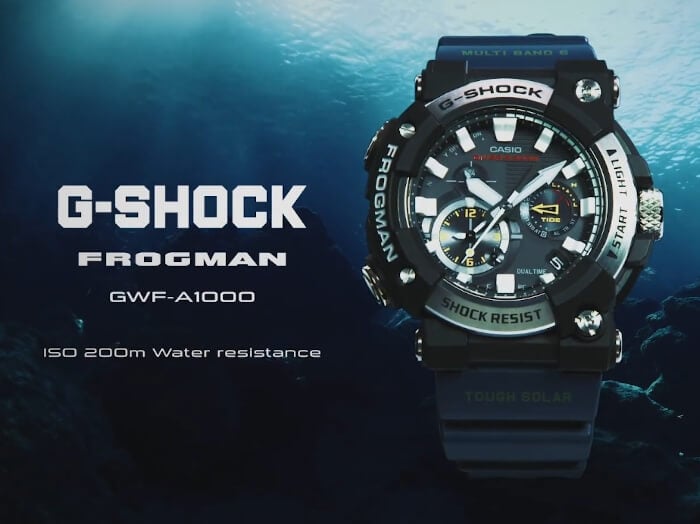 Update (April 22, 2020): Casio officially announced the all-new G-Shock Frogman GWF-A1000 series in Asia. The GWF-A1000 is the first Frogman watch with an analog display. The official page is now at world.g-shock.com.

For the dive time function, the hour and minute hands overlap each other and move in unison as a single hand, making the dive time measurement easily readable. Three dual coil motors allow the hands to quickly switch from the current time to the elapsed dive time. The watch can also automatically log diving spots and times, with diving records viewable on the smartphone app. Casio also states that the GWF-A1000 has a fluoroelastomer band that resists staining and hydrolysis.

The official specifications confirm that the new analog Frogman has a countdown timer and daily alarm, unlike the Oceanus Cachalot OCW-P2000 diving watch which is similar in appearance.

The Carbon Monocoque (single shell) case is made of carbon fiber reinforced resin. 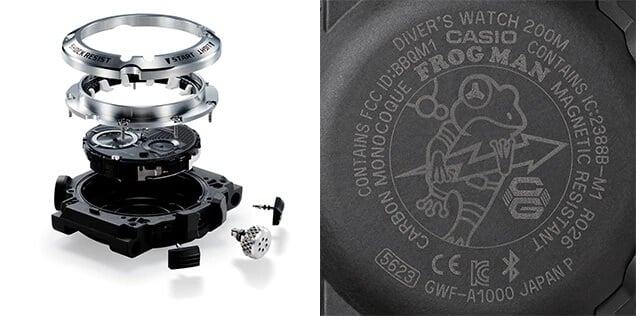 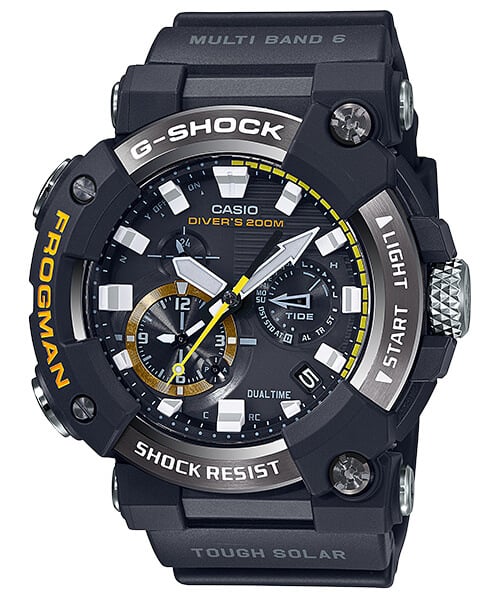 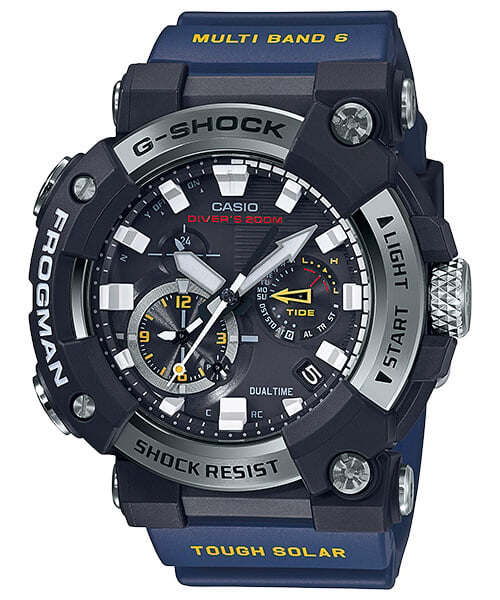 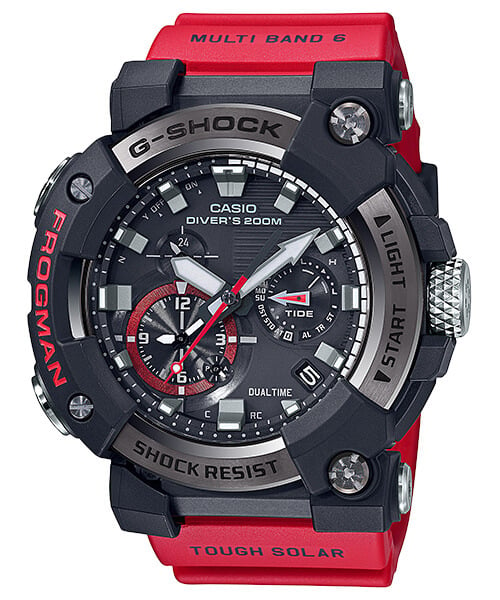 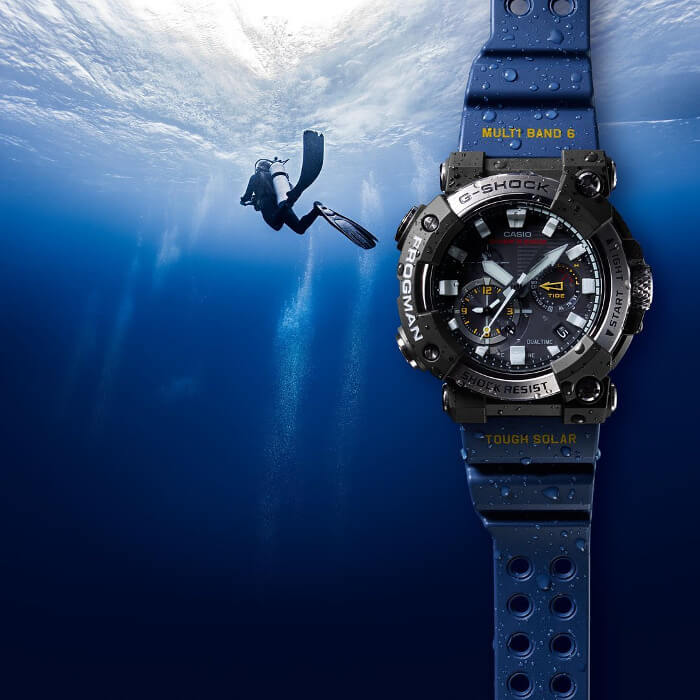 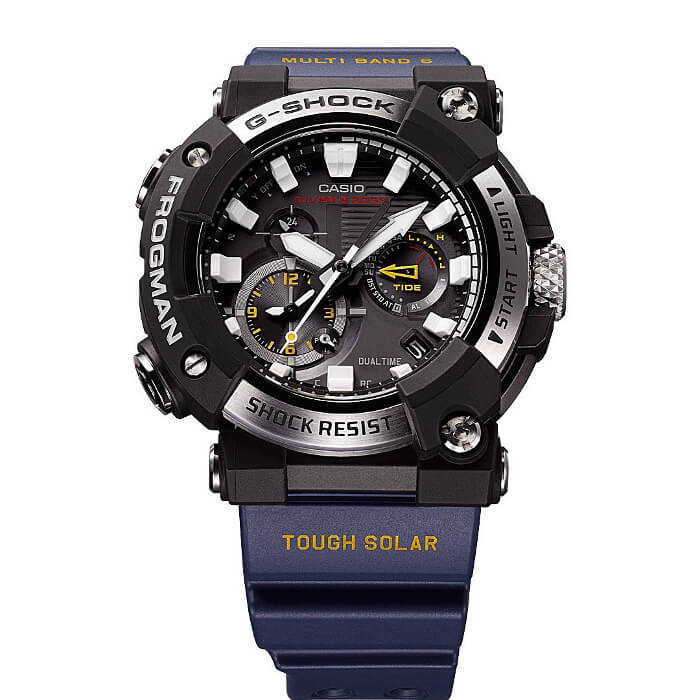 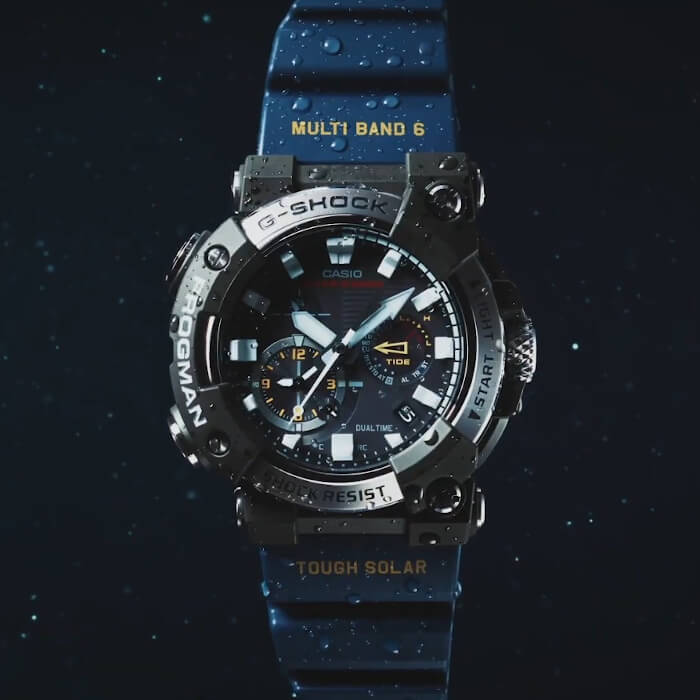 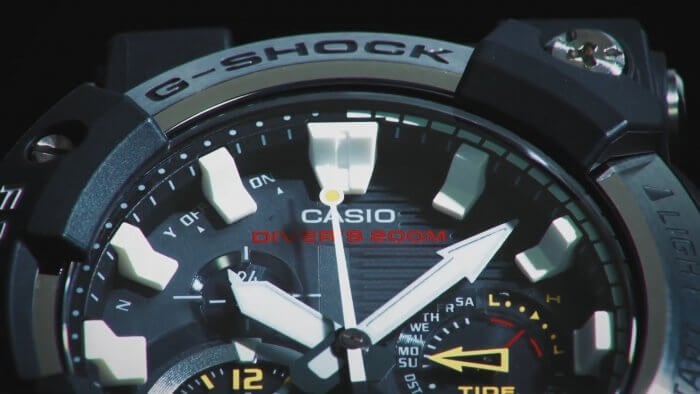 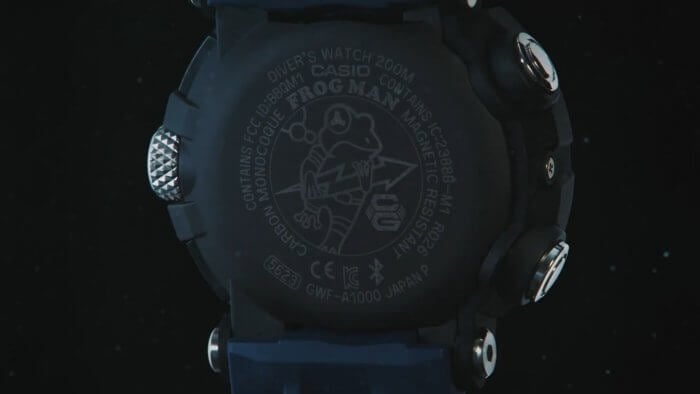 Update (March 7, 2020): Thanks to Japanese fan blog Great G-Shock World for finding this video from India TV that reveals more of the GWF-A1000 promotional material from the Casio exhibition. Near the end of the video, the watch is seen on a display monitor, along with the Bluetooth smartphone link feature. This watch could be the GWF-A1000-1A2 with a blue resin band. There are also reports of a GWF-A1000-1A with a black band band and a GWF-A1000-1A4 with a red band. 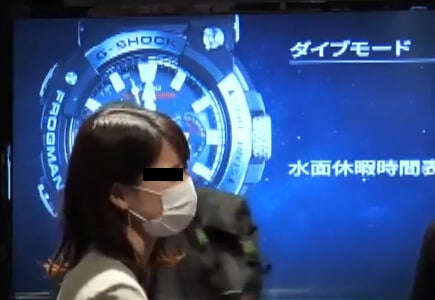 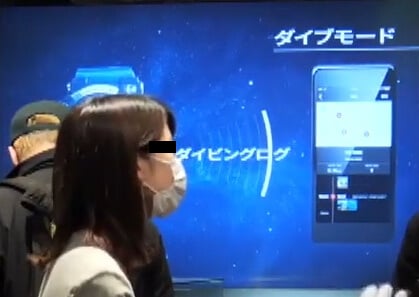 Update (March 5, 2020): The G-Shock Frogman GWF-A1000 is indeed real and coming soon. A video from Casio’s latest product exhibition in Tokyo reveals promotional signs featuring the GWF-A1000, including an image of what is likely the black GWF-A1000-1A and an image of the case back design. It appears that the previously leaked photos are accurate, and the watch has a full analog display and a Carbon Core Guard monocoque (single shell) case.

G-Central’s Take: Changing to an analog display is surprising, because the Frogman was traditionally G-Shock’s top-tier digital model. The change is not altogether unexpected, as many people consider analog watches to be more fashionable these days. G-Shock has had much success with other recent high-end analog models, and an analog design is likely to attract more upscale buyers in a way that an expensive digital model won’t. Despite being rich with features, it did not seem like the previous generation Frogman GWF-D1000 was a big seller. While some old schoolers may not be happy with the change to analog, it is always possible that some of the previous digital Frogman models (GWF-D1000, GWF-1000, and GF-8250) will remain in production alongside the GWF-A1000. 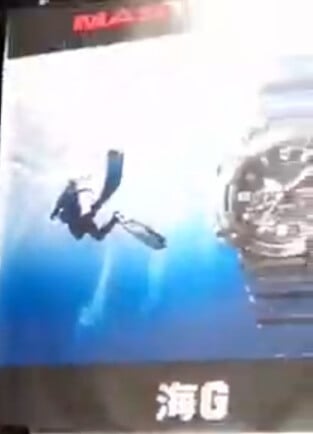 Recently, there was talk about the possibility of a new G-Shock Frogman, and now some “leaked” photos have been revealed, suggesting that an all-new Frogman model will be launching soon.

If the photos are accurate and a true indication of what is to come, then this will be a major departure from the usual digital display and stainless steel (or titanium) inner case with a screw-lock case back, as this new model has a full analog display and a Carbon Core Guard case. However, there is some doubt as to the product’s authenticity, as one of the products in the photos looks questionable, with parts of the label paint smeared and missing.

According to the photos, the watch’s model code is GWF-A1000, and it is equipped with Bluetooth and a carbon monocoque (single shell) case like the Gravitymaster GWR-B1000. A few distinguishing features of the Frogman line appear to be intact: the ISO-compliant 200M water resistance (“Diver’s 200M”) and an asymmetrical case style. The resin band also appears to have a similar shape as previous models. Other apparent features include Tough Solar, Multi-Band 6, dual time display, date display, and a tide graph. According to photos of the case back design, the watch has a new module (5623) and a new logo with a frog holding an analog needle that resembles a lightning bolt.

The questionable photo involves a GWF-A1000BRT “Rainbow Toad” model seen on Instagram. It has clear resin parts around the bezel, orange markers and crown, and pink accents. Other photos suggest that a black GWF-A1000-1A and a black and red GWF-A1000-1A4 are coming.

None of this information is officially confirmed. The alleged new Frogman did not appear at Casio’s Spring and Summer New Product Exhibition in Tokyo. (Update: The GWF-A1000 actually was revealed at the exhibition on promotional signage and with a video.) We did find this FCC ID information for a GWF-A1000 from Casio, so perhaps the GWF-A1000 is coming this year but may not exactly resemble the leaked photos.

G-Shock Frogman GWF-D1000B-1LTD 35th Anniversary Collector’s Set with Hard Case & Diving Knife (Europe)
Disclosure: G-Central is managed by fans and supported by ads. We may earn a commission on purchases from our links to Amazon, eBay, and Reeds Jewelers. Please follow your country's official G-Shock site for additional release information.

This is never going to be real. Have a look at the blurred letters on the band. Every part of this watch is stolen from an other model.
The frogman is a licenced diver tool with depth meter.
Guys please…

Yeah that photo definitely has some serious issues, but some of the other evidence is more compelling. It’s something to talk about, if nothing more.

Is it really so difficult to believe that they wouldn’t refresh the Frogman line of watches?

Frogman can’t be analog…..try diving with it under ship in enemy waters and you need precise digits in what you do…..being a Frogman…..

Can’t agree with more. The analog features and mechanism seem to be more of a showcase but not from the perspective of practicality.

Oh NO! was really hoping for a new ‘DIGITAL’ Frogman… Umm this looks like a Mudmaster and not premium, I am disappointed.

I really disliked the idea of an analog Frogman when this first came up, but now that we’re seeing the actual product… I can’t help but want it!
That blue band looks amazing with the rest of the watch!

old frog will be much more expensive

Oh dear not what I was hoping for. Need to wait a few more years for the next Froggy because this just isn’t one.

The GWF-D1000 was on course to ultimate tool watch perfection.

This has none of the features that was making the GWF-D1000 standout (Compass, Depth, Temp). Where did the moon go?!? World Time? Stopwatch? etc, etc, etc.

I was really hoping they were going to evolve the Frogman much like the Rangeman with slightly bigger digits so you could see better underwater. Perfection would have been achieved if they could have pulled off GPS (no tracking, but you can at least get you lat/long at the moment) and altimeter/barometer.

From the mud and ice to swimming in the Dead Sea, I have never once had to pause to think about my watch. Even my baby granddaughter that is so intrigue with it, she uses it a teething toy (I don’t understand it, but she loves it). I don’t need my Frogman talking to my phone.

This is a fashion piece, this is not a real Frogman. I guess nobody bats 1.000

Let’s wait and see if Casio will learn from this mistake.

RIP Frogman 1993 – 2019
The G-Shock Frogman has officially dies at the grand old age of 26 years old. 2020 brings in a new era of analogue Frogman that nobody seems to want and with a plastic case whereas the old one always had a full metal. All good things come to an end. RIP Mr Frog.

I think this model will sell a lot better than the GWF-D1000. As of now, the GWF-D1000 and GWF-1000 are still active models, at least in Japan, so digital Frogmans are not completely dead yet.

Plastic ??? Are you an idiot ? Do you even know what carbon is ? Obviously not…

I am a salvage diver , yesterday we were looking at the news and I as well as my diving partners we concur that this full analog frogman is a fail in terms of practicality… the compass was one of the most useful things… gone the depth meter in digital form it was just perfect with the digital quick glance … this is a watch for wrist posers now. Yesterday I bought 2 digital ones and here several people made buys too. I’m not only a diver I’m an underwater welder for an oil rig.

Any word on the “Rainbow Toad?” It really appeals to my inner teenager.

Originally scheduled for July 2020 in Japan.

glad i got the last digital one… all the masters of G slowly going analog is bad imo.