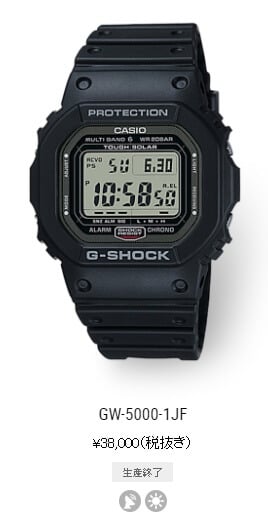 The new “U” editions have the same designs but with an LED light (versus the old EL backlight) and a new module offering enhanced functions, such as adjustable light afterglow, time display in stopwatch and timer mode, timer settable in seconds, adjustable date format and language, and more. (Please visit the “U” Series link above for all the new features.)

(We also previously reported on the lightweight GW-S5600-1JF being replaced by the GW-S5600U-1JF.)

In the past, the “end of production” status appeared to apply globally to all markets, but it’s uncertain how the discontinuation of the GW-M5610-1JF will affect the status of the GWM5610-1 in the U.S., where none of the “U” models were released yet. It seems likely that the U.S. will get the new GW-M5610U version at some point, but considering there is probably a large amount of GWM5610-1 watches still available, it could be a while before that happens.

Amazon now shows GW-M5610U-1 image for GWM5610-1 listing
Disclosure: G-Central is managed by fans and supported by ads. We may earn a commission on purchases from our links to Amazon, eBay, and Reeds Jewelers. Please follow your country's official G-Shock site for additional release information.

In Europe, the GW-M5610 are still being sold in the official Casio website and the GW-M5610U disappeared. I guess they want to get rid of all old stocks they have.

Well spotted: sneaky Casio. I got the U version from the Casio EU store a few weeks ago, now it’s gone.