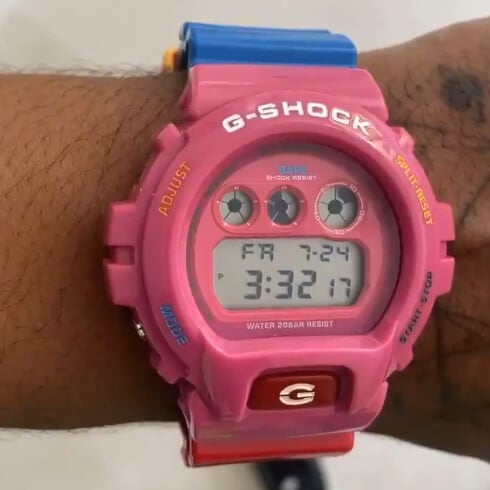 American rapper Kid Cudi recently teased an upcoming collaboration between himself, A Bathing Ape (a.k.a. BAPE), and G-Shock, with a short video on Twitter of an exclusive G-Shock DW-6900. The watch is a multi-colored affair that appears to have a pink bezel, red lower band, blue upper band, and yellow band keeper. A blue BAPE logo appears on the face, and a BAPE gorilla logo and Kid Cudi logo appear together on the lower band.

The BAPE collaboration likely includes clothing pieces, and Kid Cudi also mentioned an upcoming Adidas collaboration coming in the fall. Cudi recently released the song “The Adventures of Moon Man & Slim Shady,” a collaboration with Eminem. He is a known fan of G-Shock watches (particularly the DW-6900 series) and BAPE. Before his music career took off, Cudi met his mentor Kanye West while working at a BAPE store in New York City. 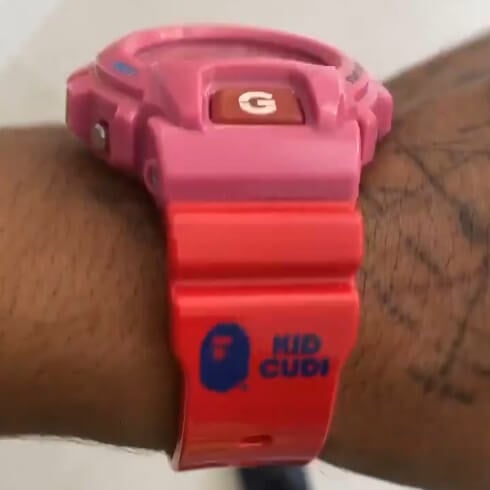 Ill have some news on the BAPE collection im doin soon. As well as release dates for Adidas madness. Comin this fall.

A Bathing Ape x G-Shock DW-5600E-1 ‘BAPE CAMO’ (Japan)
Disclosure: G-Central is managed by fans and supported by ads. We may earn a commission on purchases from our links to Amazon, eBay, and Reeds Jewelers. Please follow your country's official G-Shock site for additional release information.