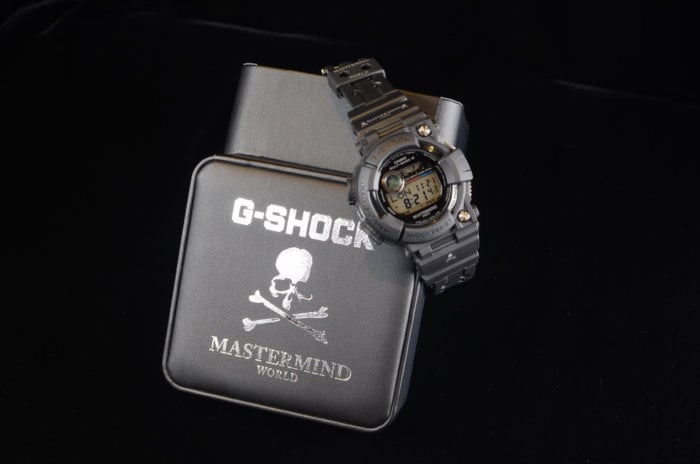 Japanese fashion label Mastermind World is releasing a limited edition G-Shock Frogman collaboration watch. This custom GWF-1000 model features a Mastermind World logo on the display along with logos and graphics on the band and keeper. The case is stealth black with no bezel lettering paint and has silver front screws like the standard GWF-1000-1. It also has a skull and crossbones EL backlight graphic and a custom case back with the Mastermind World logo.

Mastermind Japan previously released a G-Shock Frogman collaboration in 2010, the GWF-1000MM-1JR, which had a similar design as this one except that it was branded with “Mastermind Japan.” The base GWF-1000 is one of the premier digital G-Shock watches and a true diving watch with ISO 200M water resistance and a steel inner case.

The Mastermind World x G-Shock Frogman GWF-1000 will be available on October 28 at the Isetan Japan Store in Kuala Lumpur, Malaysia and October 28 at Isetan Shinjuku Store Mens in Tokyo, Japan.