When the metal-covered G-Shock GM-2100 series made its debut, one of our visitors commented on the lack of a Carbon Core Guard logo on the back cover, and there was no CCG specification in the official listings, so we should take that to mean the GM-2100 is not a Carbon Core Guard model, unlike the GA-2100. In case there is still any doubt, Casio China released an official statement about incorrect product tag information on GM-2100 models sold in China, and the statement clarifies that the GM-2100 series does not have the Carbon Core Guard feature.

We have seen some retailers and videos incorrectly listing the GM-2100 as a CCG model. It is easy to see why the mistake has been so widespread, as the GM-2100 is essentially a GA-2100 with a stainless steel bezel and the same module. It just doesn’t have the exact same type of case.

We wouldn’t let this sway a decision against the GM-2100, as the lack of a CCG case in this situation basically means that the inner case is made of resin (like a DW-5600) instead of carbon fiber reinforced resin. The GM-2100 has nearly the same dimensions as the GA-2100 and the same thickness of 11.8 millimeters. In terms of toughness, we wouldn’t expect the lack of a Carbon Core Guard case to be detrimental, especially as it pertains to real world use. 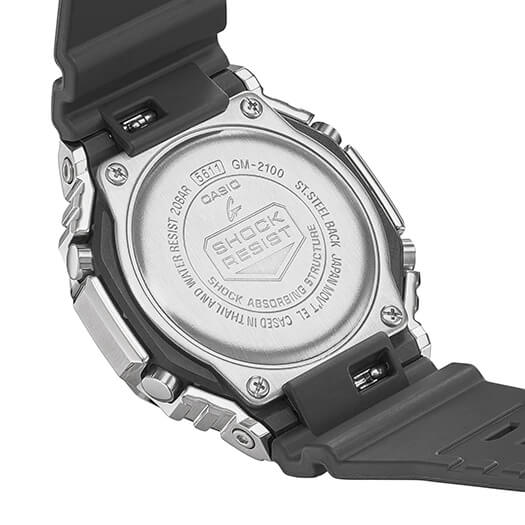 G-Shock GA-2100 Neon Accent Series: Stealth black with neon
Disclosure: G-Central is independently managed by fans and supported by ads. We may earn a commission on purchases from our links to Amazon, eBay, and Reeds Jewelers.

What about the GM-S2100 series? Does it mean it has no Carbon Core Guard too?

I actually had the same insights during my video review a couple of days ago on my channel in Polish.
https://youtu.be/jcPNvuxHUrE?t=7m16s