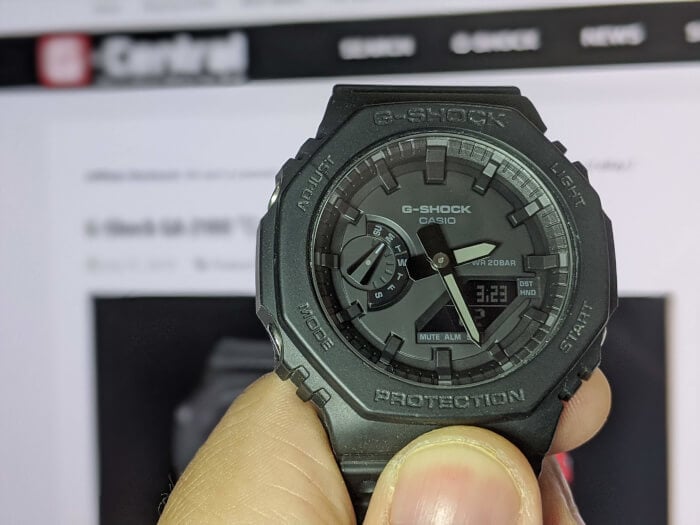 The GA-2100 series appears to be G-Shock’s most successful new model launch since the GMW-B5000. The blackout GA-2100-1A1, one of three debut models from 2019, is still widely sold out and unavailable. The new GA-2110SU-3A (GA2110SU-3A in the U.S.) has been selling out quickly at some American retailers. Why is the GA-2100 so popular? Based on my own experience and the reactions of others, the reasons are very simple.

While the GA-2100 has more of the original G-Shock DNA in its style than some other recent models like the GA-2000, it is also a subdued style that has a mainstream appeal. Fans will easily recognize it as a G-Shock, but at the same time, it doesn’t scream “G-Shock” to others.

The bezel has a strong resemblance to the Audemars Piguet Royal Oak, earning the watch the nickname the “CasiOak.” I don’t think that connection is necessarily a conscious selling point for most buyers, but the design does give the watch a classic look that comes across as confident and effortless. There is no doubt that the similarity has garnered the GA-2100 a lot of attention online, which gave it more publicity than other recent models. While it is definitely a distinctive bezel, it is a smaller and less obtrusive one than other G-Shock watches. This gives the watch a more conservative look, while still retaining signature G-Shock elements. The dial of the GA-2100 offers a refined style that isn’t too busy and looks both contemporary and timeless. Overall, it simply looks classier and more refined than other analog-digital G-Shock models in the same price range.

The use of the Carbon Core Guard structure allows the GA-2100 to be the slimmest G-Shock of all current models. The height and width of the watch is considered mid-size, rather than the large size of most analog G-Shock watches, and the watch wears very light and comfortably. The GA-2100 is currently the lightest analog-digital G-Shock model at 51 grams. (It is also one of the lightest G-Shock models overall, behind the Japan-only GW-S5600-1JF and the women’s S Series GMD-S6900.) Those with smaller wrists do not need to worry about the watch being a bad fit, or if it will look too big, which is often a concern with larger G-Shock watches. Though the display is larger than a DW-5600, it wears very similarly, and I like to think of it as an analog-digital version of the DW-5600, but with a few more features.

The GA-2100 is a great-looking watch, and the reasonable US$99-$110 MSRP offers a great value. Whether purchased as a daily wearer or for the weekends and recreation, buying a GA-2100 is within most people’s budget and does not require a major sacrifice.

While the GA-2100 may convert people who wouldn’t have otherwise bought a G-Shock, that doesn’t mean those people won’t welcome the features that G-Shock is famous for. The heavy-duty shock resistance and 200-meter water resistance gives it a leg up on its competitors, and other useful functions include world time, a 1/100-second stopwatch, 24-hour countdown timer, date and day display, and dual LED backlight.

The Not So Good

The GA-2100 isn’t a perfect watch, and many people may be better served by another G-Shock model, depending on their needs. The GA-2100 lacks an auto light option that will activate the backlight with a turn of the wrist. The LCD display is very small and may be practically useless to those with farsightedness or ageing eyes. The hands on the GA-2100-1A1 do have lume, but it is not the same “Neobrite” lume found on the other GA-2100 and GA-2110 models, and is not very effective compared to those other models. Though the LED backlight does a great job with the LCD display, the other LED light does not do a very good job of illuminating the hands and markers on the GA-2100-1A1 in the dark. Based on videos I’ve seen, it seems to work a lot better with the other GA-2100/2110 models. The subdial on the GA-2100-1A1 that shows the day of the week is also very small and nearly invisible because of its black and dark gray colors.

Those needing a more readable LCD display will be better off with another G-Shock, but will have to settle with either an all-digital model or a larger analog-digital one. Personally, I find the GA-2100-1A1 to be a fine daily watch, but only if I’m using it for the sole purpose of telling the time. If I need to use the digital functions or need to check the time at night a lot, then I would prefer to use another G-Shock. (Other GA-2100 models would be better suited for nighttime use than the GA-2100-1A1.) For me, the GA-2100 could never be my only watch, but I’m happy to have it as part of my small collection.

The blackout GA-2100-1A1 is still sold out everywhere, but more stock is expected in the coming months, and we will make a new post when it is available. The GA-2100-1A and red GA-2100-4A are also mostly sold out. Some of these models may be more readily available in some countries in regions like Southeast Asia, but beware of fakes at unauthorized shops and online. Also, there are some online scams involving the GA-2100-1A1 and other popular G-Shock models, where some e-commerce websites end up shipping a completely different model. Stick with reputable authorized retailers and avoid unknown stores.

Reaction to The Time Teller’s “10 Things I Wish I Knew BEFORE Buying A G-Shock!”
Disclosure: G-Central is managed by fans and supported by ads. We may earn a commission on purchases from our links to Amazon, eBay, and Reeds Jewelers. Please follow your country's official G-Shock site for additional release information.

Casio Mudmaster is an accurate and bullet proof watch. Perfect for hard wear grunt use.

I really love it if it have the seconds hand on the Analog portion of the watch . Then it will be perfect for me to own it.

Unfortunately, most of the affordable analog G-Shock watches do not have the seconds hand, but the more expensive ones do. An exception to that is the GA-800.

I recently bought the transparent one which looks great and comes at an afordable price (~€90), however it has really more than one significant disadvantage that ar worth another comment at this point:

-The LCD with all the functions turns practically useless when it’s somewhere between 3:30 and 5:30 (am & pm) because the huge arms make it can’t be seen/used.

-The control of functions/settings at darkness is double trouble because the led turns off at a max of 3 seconds. and the glowing arms are useless without glowing indexes of the hours even though both are the same white at daylight.

-Water comes easily between the transparent rubber outside and the core, needs hours/days to disappear makes the look strange.

I don’t understand CASIO to oversee this aspects.

If you press the upper-right and lower-left buttons at the same time, the hands will move out of the way of the LCD temporarily. But yes, I agree that there are better options if nighttime visibility and LCD functions are a priority.