Casio added two new series to the Pro Trek lineup in Japan for March 2018. The PRG-330 is an update to the budget slimline PRG-300 series and adds an aluminum bezel. The PRW-6600 series has a similar design as the safari-inspired PRG-600 and PRG-650 series and adds Multi-Band 6 radio wave time-sync. 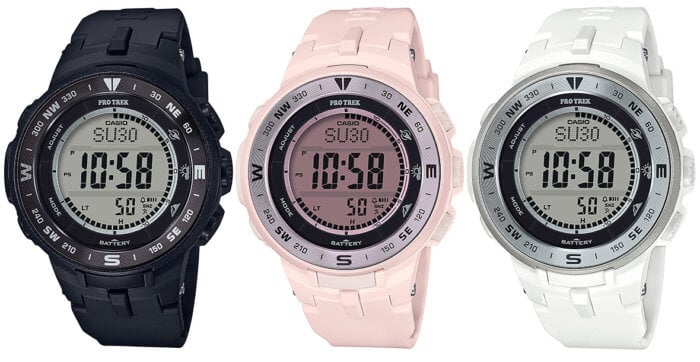 Debut models for the PRW-6600 series include the black and green PRW-6600Y-1JF with silicone band, black and orange PRW-6600YB-3JF with green khaki cloth band, and PRW-6600YBE-5JR which includes both a beige cloth band and a dual-layer silicone band with a luminescent inner layer (a feature also seen in some PRG-650 models).

These models have a gray ion-plated stainless steel bezel along with Tough Solar, Multi-Band 6, and the Triple Sensor Version 3. Like the PRG-600 series they have full auto dual LED lights with the Neon Illuminator LED blacklight for the hands and markers and the Super Illuminator LED for the LCD display. Other features include 100-meter water resistance, low temperature resistance (-10 °C/14 °F), 1/100 second stopwatch (24 hour total with split), countdown timer (60 minutes), and 5 alarms. (One feature that the PRG-600/650 is known for, the STN LCD display, has not been confirmed on this series yet. Update: We have not been able to find any mention of STN LCD displays on these models.) List price is ¥52,000 JPY for the PRW-6600Y-1JF and PRW-6600YB-3JF and ¥55,000 JPY for the PRW-6600YBE-5JR.

Pro Trek PRW-50: Like the PRW-60 with a new style
Disclosure: G-Central is managed by fans and supported by ads. We may earn a commission on purchases from our links to Amazon, eBay, and Reeds Jewelers. Please follow your country's official G-Shock site for additional release information.