G-Shock surpassed 100 million units shipped in 2017 and celebrated its 35th Anniversary in 2018. In 2019, Casio has now revealed the all-time top three G-Shock watches (by units shipped).

Casio: “Built from precision parts, the design of the GA-110 evokes the cool sophistication of Japanese manufacturing. The GA-110 has been sold in many color variations and, with its global popularity, captured first place.” 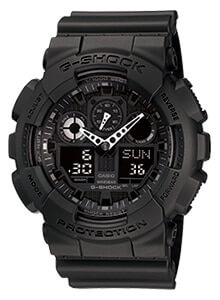 Casio: “Like the first-ranked GA-110, the GA-100 is popular for its oversize case and bold presence. It is also distinguished by its symmetrically placed LCDs and dynamic design.”

G-Central: The GA-110 has an industrial-inspired display that offers a unique contemporary style with many color combinations available. The GA-100 offers a more conventional display inspired by an instrument panel and is also available in many variations. The GA-100 and GA-110, designed by Ryusuke Moriai, exemplify the timeless style of design that G-Shock is often successful with. Their ascent to the top of the rankings in a relatively short period of time emphasizes how immensely popular these models are.

Casio: “The DW-6900 was released just after the DW-6600 (1994), which was the first G-SHOCK to feature an EL backlight. The backlight’s ability to display text or a symbol became a popular feature. The DW-6900 has also been the base model for a variety of collaboration and special models.”

G-Central: With its front-facing light button and high-visibility EL backlight, the DW-6900 is a practical watch for all activities and one of the most affordable G-Shocks. For collaboration watches, the DW-6900 is is one of the top models along with the DW-5600. Casio has previously stated that the DW-6900 was the top-selling G-Shock of all time but that was before the GA-110 and GA-100 took over the top spots. However, it is still the top model in Japan. 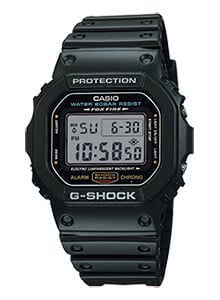 G-Central: It’s not surprising to see the DW-5600 ranked high in Japan as it represents the heart and soul of G-Shock as the “origin” model that descends from the first-ever G-Shock from 1983 (DW-5000C).

From Casio: “Casio thanks G-SHOCK fans everywhere for powering the brand through an amazing 35 years. Casio plans to release many new products in 2019 that will put a whole new spin on the 35-year history of the brand. Casio is committed to driving progress with the G-SHOCK brand and will continue to seek out new challenges. Casio is determined to more than exceed expectations for the G-SHOCK brand and will continue putting out products that astonish and amaze. Look out for G-SHOCK in its 36th year!”

XLARGE x G-Shock DW-6900 25th Anniversary Navy Limited
Disclosure: G-Central is managed by fans and supported by ads. We may earn a commission on purchases from our links to Amazon, eBay, and Reeds Jewelers.

I agree the GA-100/110 are great ana/digi models, with decent feature sets. The only caveat: non-illuminating LCD display areas. And with just one LED light at the 6 o’clock position that’s simply not adequate enough to illuminate the whole analog face area. A module update which includes dual illumination with dual (or multiple) LED lights would be much desired.

Regarding the DW-5600/6900, I simply don’t know why they’re still popular. Maybe the price range? Or the cost needed for collaboration projects? With just basic feature set (not even World Time) they’re just not able to attract the discerning crowd anymore — except to the inexperienced audiences who have little knowledge on the G-shock range and milestones.

Those are valid points but there are always more advanced G-Shock models available if those missing features you mentioned are a priority. For the DW-5600/6900, yes I think the lower prices play a large role in it along with the simple and iconic design, functionality, and of course durability. Even though they are “basic” models they still have a lot of features (stopwatch, countdown timer, alarm, auto calendar, EL backlight) and a lot of people wear a watch just to tell the time. The buyer might not need the more advanced features and might be perfectly happy with the value he/she is getting at that price, so I don’t think it’s necessarily a matter of people being inexperienced or undiscerning.

It is no doubt that 5600 and 6900 is so popular, and Casio keep adding different feature to enhance it function, like recently B5600 having Bluetooth, as well as basic Touch Solar, Wave Receiver. However, this mean me disappointed a bit, even GA110/100 is so popular, in past 8 to 9 years, Casio have not think too much to enhance it feature. I really look forward to see there is a Touch solar, Wave Receiver as well as Bluetooth function for GA110/100

1. It’s not about features. It’s all about classics. I have to disagree with you that only “inexperienced audiences who have little knowledge on the G-shock” would be “fooled” by these cheap basic models. Instead, a lot of inexperienced G-shock buyers tend to pay attention to those super-advanced G-shocks with lots of sensors. Old enthusiasts of G-shocks are actually the ones who will understand and appreciate the value of classics. Don’t get me wrong, I do love advanced models such the Rangeman I’ve owned. I am just pointing out that it is the history/glory/spirit behind these old models that attract fans. I don’t think an inexperienced buyer would understand how I feel when I hold a DW-5600 in my hand.

2. Regarding the sales, Just take a look on Amazon reviews and sales rankings of these two models, and you will realize that the DW-5600/6900 are undoubtedly two of the best sellers. I do agree that people buy them for different reasons.

BTW, as I said, the design of DW-5600/6900 has become classics. That is why CASIO keeps releasing new models with advanced features (e.g., radio control, tough solar, Bluetooth, advanced materials, etc.) using the same external design of 5600/6900. They know people would buy it

It is discontinued, so you will have to buy a used one on eBay.

I wonder if the worldwide data includes Japan itself ?