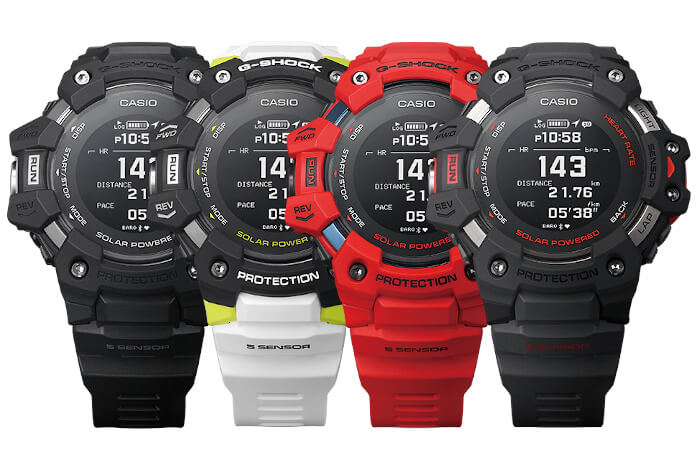 Casio announced the highly anticipated G-Shock GBD-H1000 for an April 2020 release (but now delayed until late May). This new G-SQUAD fitness series features built-in GPS and five sensors: an optical heart rate monitor, pressure sensor (altimeter and barometer), compass (with auto horizontal compensation), thermometer, and accelerometer for step counting. The high-contrast memory-in-pixel (MIP) LCD display is reminiscent of the G-Shock GPR-B1000 Rangeman, as its pixels fill the whole display to display a large amount of data. Other notable features include automatic GPS time syncing, Bluetooth mobile link, vibration alerts, solar power, and USB charging. As a G-Shock, the GBD-H1000 is fully shock-resistant and water-resistant to 200 meters. 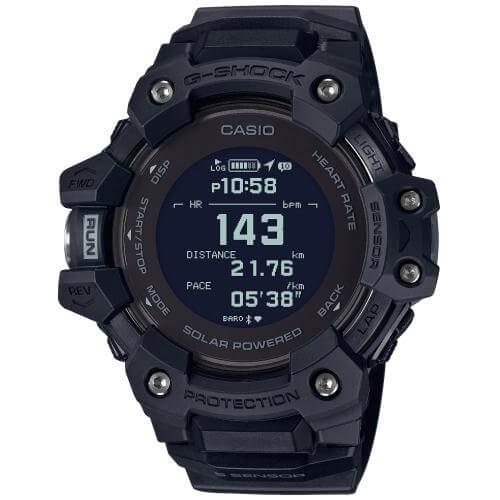 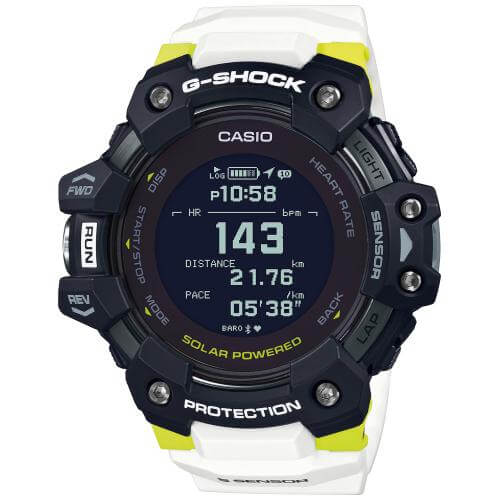 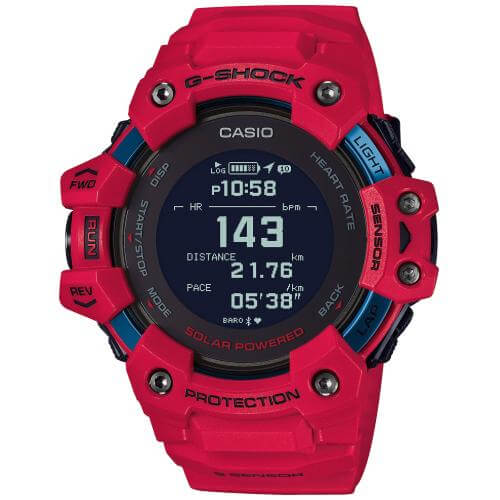 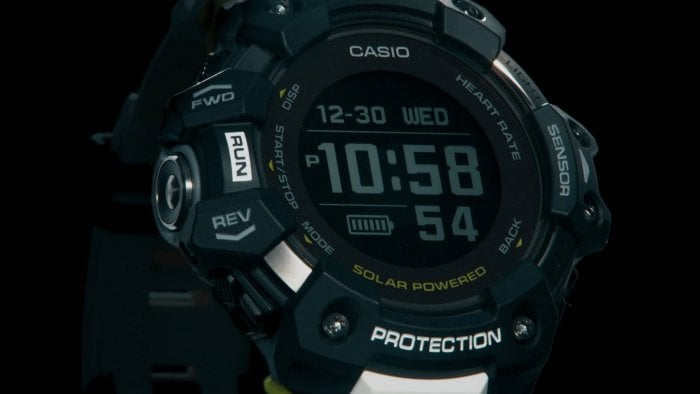 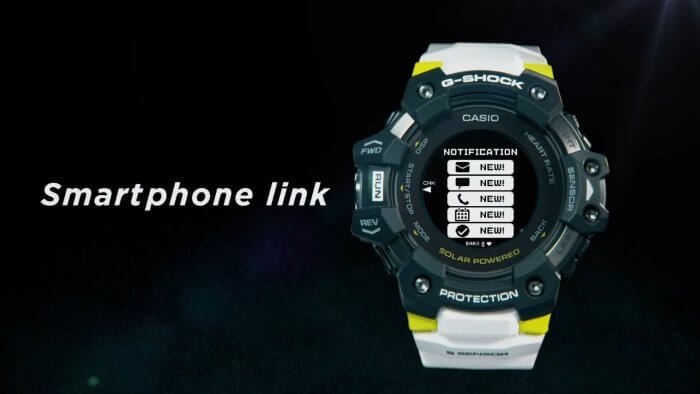 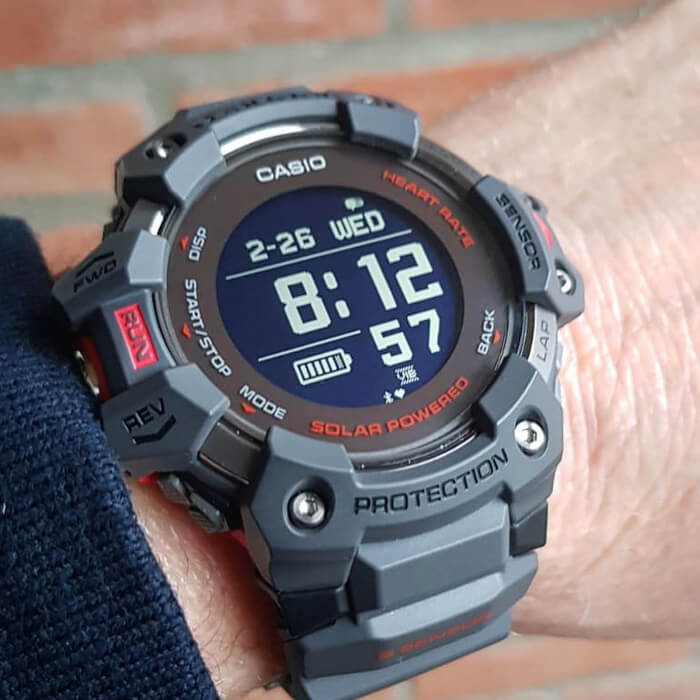 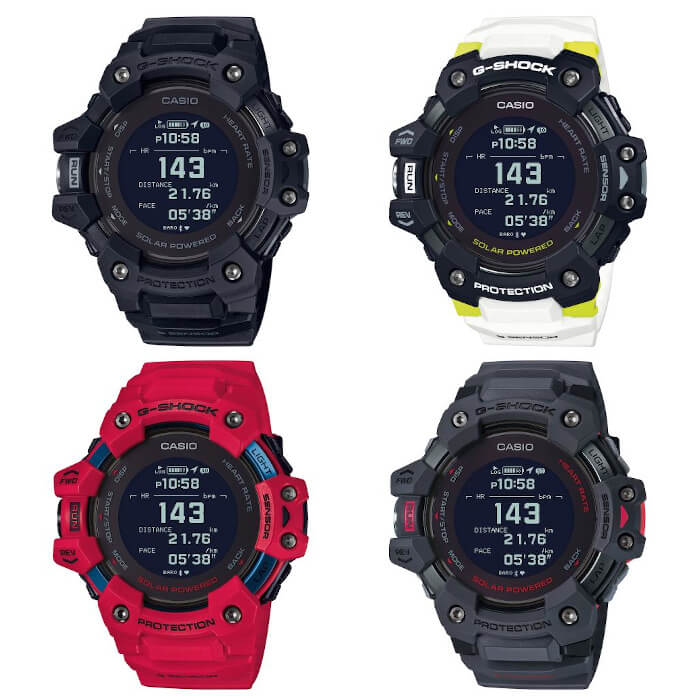 G-Shock GSR-H1000 Prototype Photos and More Info
Disclosure: G-Central is managed by fans and supported by ads. We may earn a commission on purchases from our links to Amazon, eBay, and Reeds Jewelers. Please follow your country's official G-Shock site for additional release information.

I wonder why Casio doesn’t have better resolution on the stopwatch with this model and the GPR-B1000. 1-second increments are too coarse for some measurement tasks.

Also, the countdown timer maximum time is quite short on this new model.

I agree. A dedicated activity- sports- watch with a 1-second increment stop watch? Who in the world signed off in this one?

Are there any features the GPR-B1000 Rangeman has that this new watch doesn’t?

The countdown timer on the GPR-B1000 is 24 hours max instead of 60 minutes, but it doesn’t have the repeatable interval timers. While the GBD-H1000 has location/point tracking, it does not have the full navigation features of the GPR-B1000 with mapping and destination information. GPR-B1000 also has mud resistance, a sapphire crystal, carbon fiber insert band, tide graph and moon data, and sunrise/sunset time.

did they have saphire cristal?

It was not mentioned in the specs yet, so probably not.

I don’t think this one is classified as Tough Solar, but yes, solar power.

If two watches are both G-Shocks, what differs one that is “Tough Solar” and the other that is merely “solar-powered”?

That’s a good question. I’m not sure what the exact criteria are are for qualifying as Tough Solar, and I’m just going by what Casio said (or didn’t say) about the watch so far. On its Tough Solar page, Casio says it is capable of converting various light sources, such as sunlight and fluorescent lamps. Stable function operation, A large-capacity battery with power saving function, and the ability the charge under low light are also mentioned. I’m not entirely sure why the Rangeman GPR-B1000 is listed as Tough Solar, but the GBD-H1000 has not been designated as such. It might have to do with the capacity of the rechargeable battery, as the GPR lasts about 29 months (without using GPS) on a full charge with power saving on, while the GBD (in time mode only with step count and notifications) lasts about 12 months.
https://www.casio-watches.com/technology/en/technology/tough-solar/

Hello, maybe it sounds like a redundant question but, will GBD-H1000 interval timer mode have vibration alerts? And I want to know the same with the new GBD-100. Thank you.

G-Central
Reply to  Peter the Peter

That’s actually a good question, as this is unexplored territory at the moment. The only other G-Shock with vibration alerts is the GD-350, and the vibration works for the end of timer alert and alarms. I think the vibration will probably work with the timer on the GBD-H1000 and GBD-100, but I can’t say that with certainty right now or that it will work with each interval timer. We will probably see more complete specs closer to release, and I would suggest looking at the instructions online (when available) to see all the details. We will add a link to the instruction manual when it is available.

No sapphire glass and an altimeter that relies on atmospheric pressure rather than gps map data, lowers the the desire to purchase for me personally

With gps turned on, the big rangeman uses the gps to correct altimeter value from barometer. May be it’s the same with the GBD-H1000. That’s not perfect, but when I need the altimeter I usually have the the gps on (hiking, biking).

Hey there,
will it be possible to pair the watch with a hr-chestband? Are there different training modes to choose from, i.e. indoor cycling, strength training,…?
Thanks!
Christopher

Chest-band HR monitor, probably not. Different training modes, don’t know right now, may have to wait until launch to find out.

Only the price in Japan was announced so far, which was mentioned in the article. 50,000 yen which is about US$450. Not sure what the US price will be yet but probably around there or $440.

It could be, but it might not be. We did an article about that talk of the upcoming smartwatch, but it’s not clear if this is the watch they were talking about or if another one is coming. Fiscal 2020 in Japan includes January-March 2021, so if there isn’t a new smartwatch released later this year or early next year, then they were probably talking about this one. I believe a more conventional G-Shock smartwatch (more like the Pro Trek WSD-F30) is coming in the future, but again, not sure if that is the smartwatch they were talking about or if it is this one.
https://www.g-central.com/is-a-g-shock-g-smart-smartwatch-coming-in-2021/

Yes, as mentioned in that article, “Casio Watch Division Chief Yuichi Masuda suggested in a June 2019 interview that the G-Shock smartwatch will be ‘a smartwatch for athletes.'” That sure sounds like the GBD-H1000. But they also mentioned G-SMART branding, which was not used for this watch, and there are also images of what looks like touchscreen smartwatches in the chart (resembling the Apple Watch and Wear OS watches), and that suggests another type of G-Shock smartwatch is coming in the future.

Wonder why this model doesnt provide the actual gps position in terms of latitude n longitude, instead it has to be linked on a smart phone.

G schock must also think to add emergency position locater on the phone in case you are lost in the jungle or at sea..

This is a fitness watch, and the GPS is mainly used for measuring distance and pace. The Rangeman GPR-B1000 is the G-Shock with GPS that is intended for trekking and navigation, and it can show your latitude and longitude on the watch.

That’s also what I was thinking, and I think it is correct, but the Rangeman GPR-B1000 needs supplemental charging and it is listed as Tough Solar (albeit just on the websites and not labeled on the watch itself, just says “Solar Powered” on the watch band).

I got an Garmin 5X Plus, that has a powerfull navigation resource. I know that Casio has technology to make its GBD-H1000 better than this. This GPS only for tracking hiking distance is not enough to defy Garmin hegemony of powerful watches.

I think the pro-trek WSD-F21HR is Casio’s answer to garmin’s Fenix.
This one is more comparable to the garmin instinct regarding its functionality.

Ultimate watch for me is a mesh of the WSD F30 and the GPR B1000. Sapphire glass touch screen, solar, full GPS, and most importantly GSHOCK……. put me down for 2

Japan price was mentioned in the article. Prices in other countries have not been announced yet. We generally only report prices for Japan and U.S.A., and I suggest following the official G-Shock sites or social media accounts for your region. All the GBD-H1000 models here are the same, except for the exterior colors.

Any future plans of integrating phone notifications in the rangeman?

I don’t know, but I would guess not, unless it’s a new model. (We are not Casio or G-Shock so please don’t take our word as official.)

Hopefully dont go crszy with the price like the carbon fiber

Anyone know if it’ll be possible to turn the bluetooth/phone notifications off?

I think that will be possible, but I would suggest waiting until the instructions are released, to find out all the exact features.