The G-Shock GAE-2100GC-7A is expected to be released in November 2021, with a reported price of 22,000 yen (US: GAE2100GC-7A, $200). An image was recently leaked that shows a white bezel and band with a marble-like pattern. It appears that there are no bezel screws, like there are on the GA-2100, so the watch likely uses the screwless hook and latch structure seen on the DWE-5600 series. The DWE-5600 is also known for its Carbon Core Guard interior case, but the GA-2100 series was already a Carbon Core Guard model, and the GAE-2100 is expected to be as well. It seems that the “E” in these model names may stand for “exchangeable,” as all the DWE-5600 releases have been box sets that include multiple bezels and bands. The GAE-2100GC-7A most likely includes several bezels and bands too, but the full details have not been confirmed yet. 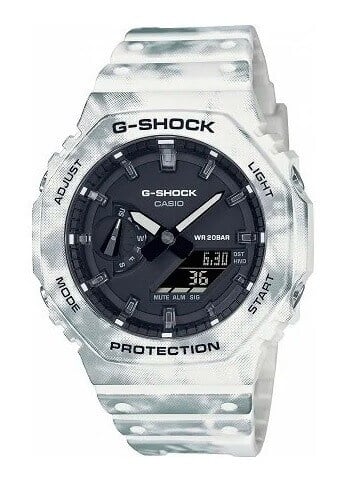