The “CasiOak” gets a major upgrade with Tough Solar and Bluetooth. 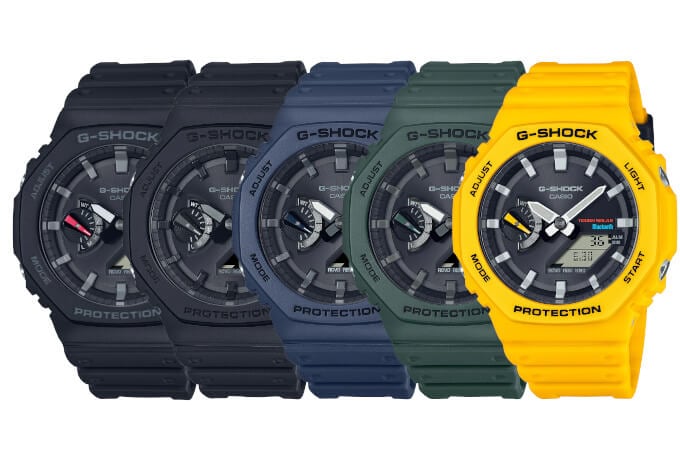 Casio officially unveiled the G-Shock GA-B2100 series featuring Tough Solar power and Bluetooth smartphone link. Like the GA-2100 on which it is based, the GA-B2100 is a Carbon Core Guard model with a carbon fiber-reinforced interior case. The GA-B2100 is a slimmer G-Shock watch measuring 48.5 x 45.4 x 11.9 millimeters and weighing about 52 grams. It is 0.1 mm thicker and 1 gram heavier than the GA-2100, making it the slimmest solar-powered G-Shock watch available. The series will launch with five models inspired by the classic first colors of early DW-5600 models. Launch models include the black and gray GA-B2100-1A, black and black GA-B2100-1A1, blue GA-B2100-2A, green GA-B2100-3A, and yellow GA-B2100C-9A. 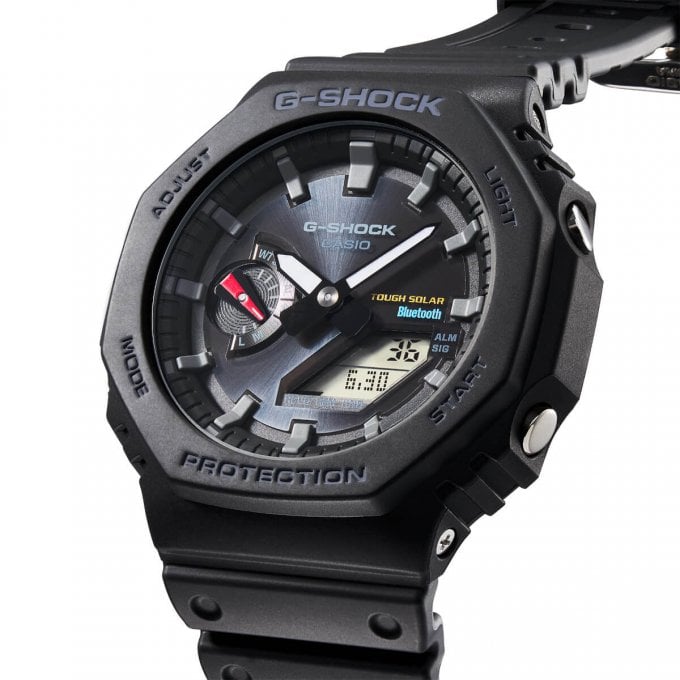 The bestselling GA-2100 series was launched in 2019 and the 2100 series is often informally referred to as the “CasiOak” due to its octagonal bezel’s similarity to the Audemars Piguet Royal Oak watch. This was not an intentional homage on Casio’s part but rather the result of combining the octagonal bezel of the original G-Shock DW-5000 with a round analog display. Although there have been established analog-digital models (like the first-ever analog G-Shock AW-500) that would later get a solar version, it is not something that happens often with recent G-Shock watches. The GA-B2100 series is unprecedented in some ways, as it is the first “GA-B” model and the first “GA-” model with Tough Solar power.

On a full charge, the watch can operate for about seven months with normal use without further exposure to light, or up to eighteen months when stored in darkness with power-saving enabled. Regularly exposing the watch to bright light will provide maintenance-free operation for many years. We suggest keeping Tough Solar watches charged up as much as possible and not letting them go to low often, for the health and longevity of the rechargeable battery. The Bluetooth link provides enhanced features through the Casio smartphone app, such as automatic time adjustment (4 times a day), easy watch setting, approximately 300 world time cities, a time & place memory log function, a reminder function, and the phone finder function. (The watch can also be adjusted and operated without using Bluetooth at all.) One notable difference from the GA-2100 is that the subdial indicator on the GA-B2100 shows the function modes and battery level rather than the day of week. The day of week can be displayed on the LCD display along with the seconds. (The LCD display can also display the date with seconds or the hours and minutes with seconds.) 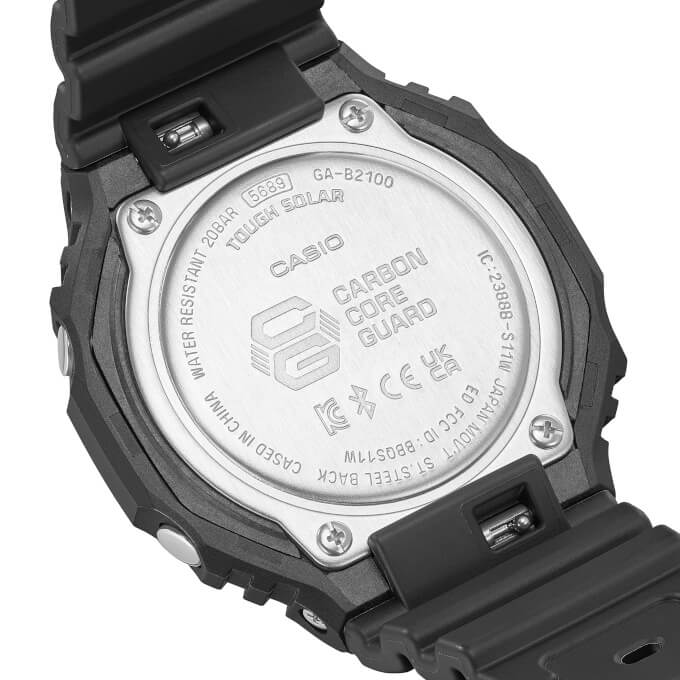 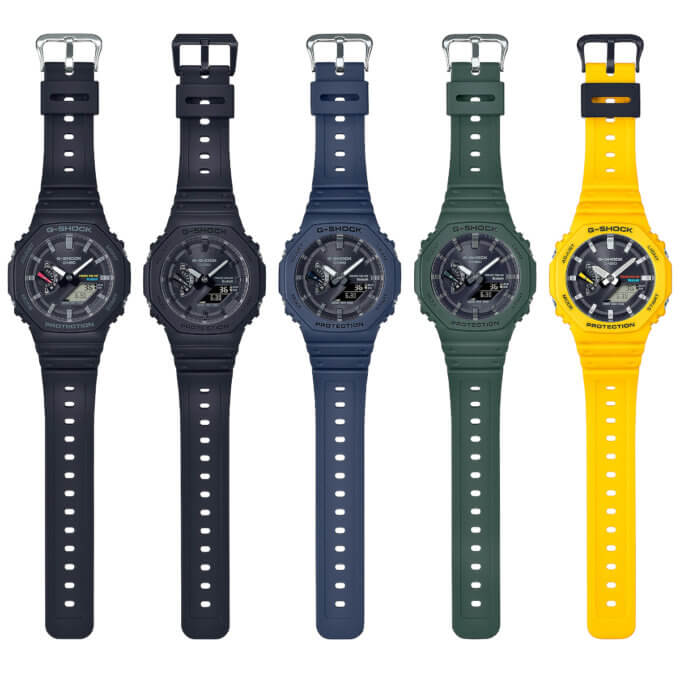 With Tough Solar power and Bluetooth, the G-Shock GA-B2100 is basically what the GA-2100 should have been, although it does cost about 50% more.

• No auto activation for the LED light
• No third hand for seconds
• Digits on LCD display are very small
• The models with an inverted LCD display are harder to read
• Countdown timer max time is short (1 hour) compared to some other G-Shock models.

Alternatives: The deluxe GM-B2100 is a full metal version. The more affordable GA-2100 offers the same style but without solar power and Bluetooth.

Why buy the GA-B2100 versus the GA-2100? The GA-B2100 costs about $50 more and offers solar power and Bluetooth, making it a worthwhile upgrade. The rechargeable battery is expected to last many years longer than the standard battery found on the GA-2100. The Bluetooth connectivity also makes adjusting some settings easier and offers useful functions such as expanded world time cities, reminder alerts, and a time and place log. Another advantage over the GA-2100 is that the date format is adjustable to the international style and the day of week language is available in six languages. 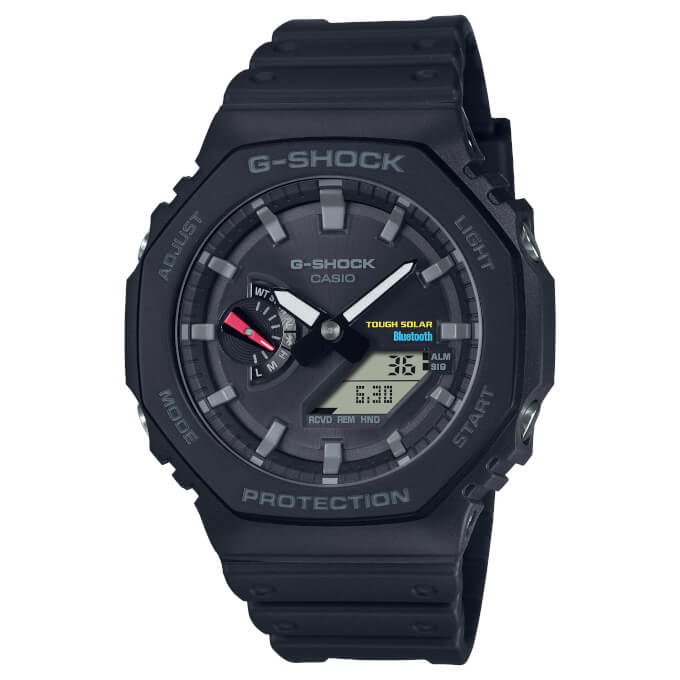 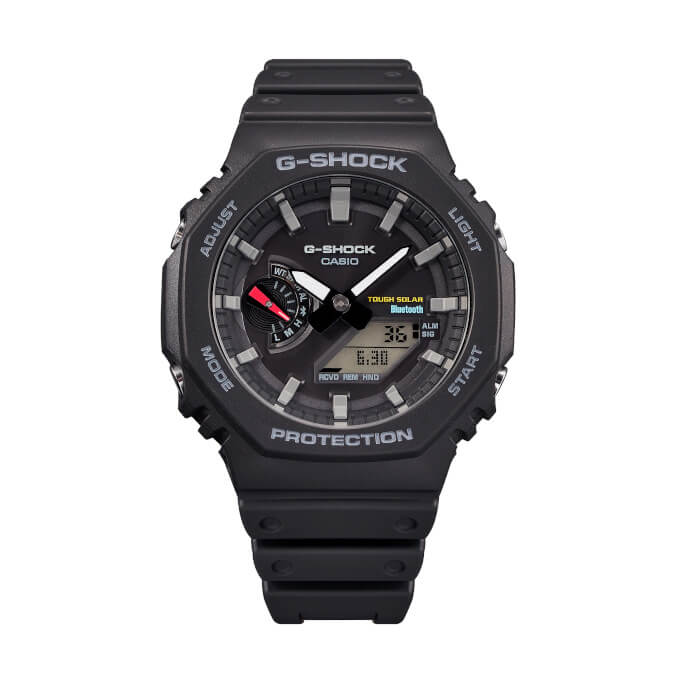 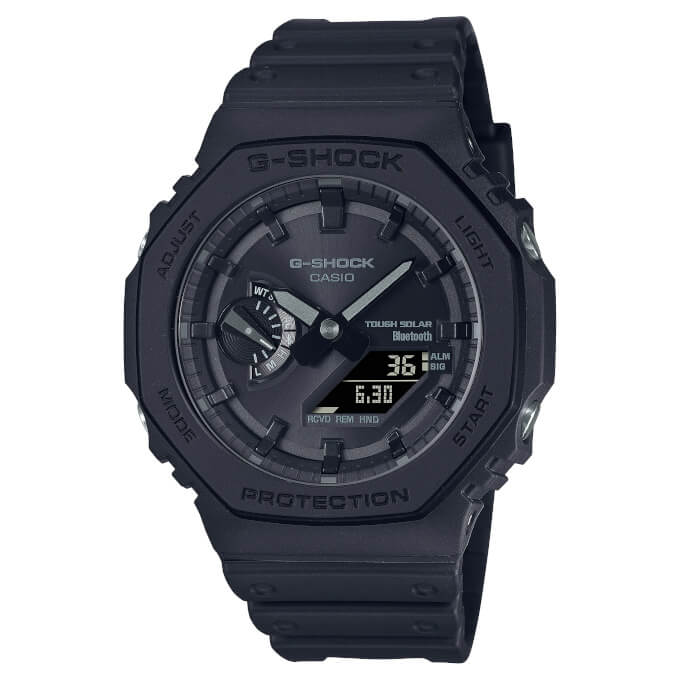 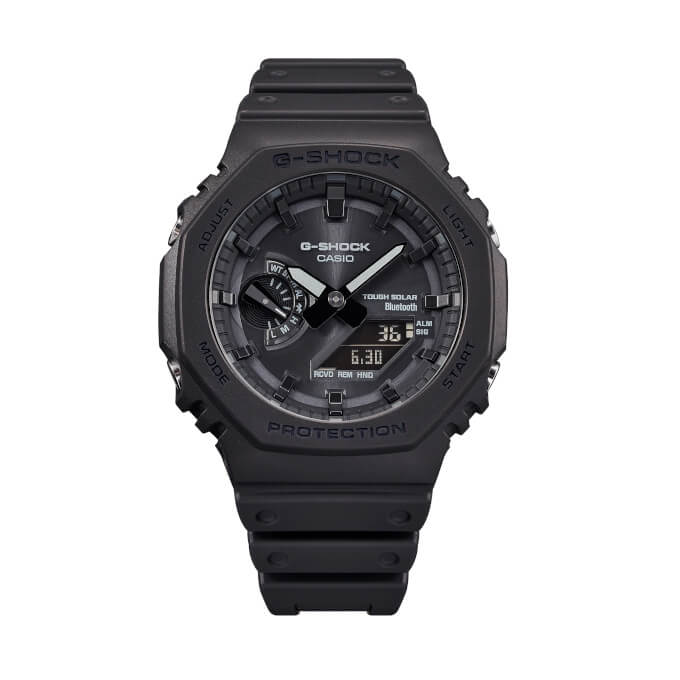 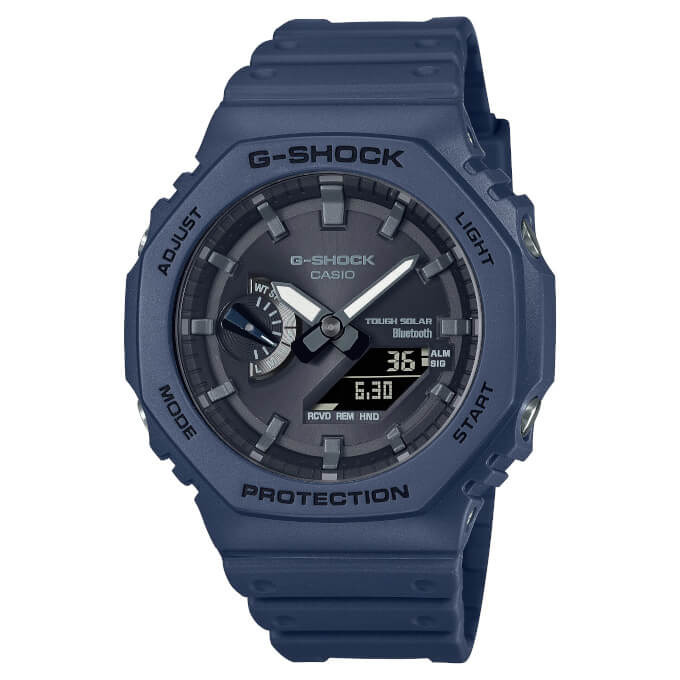 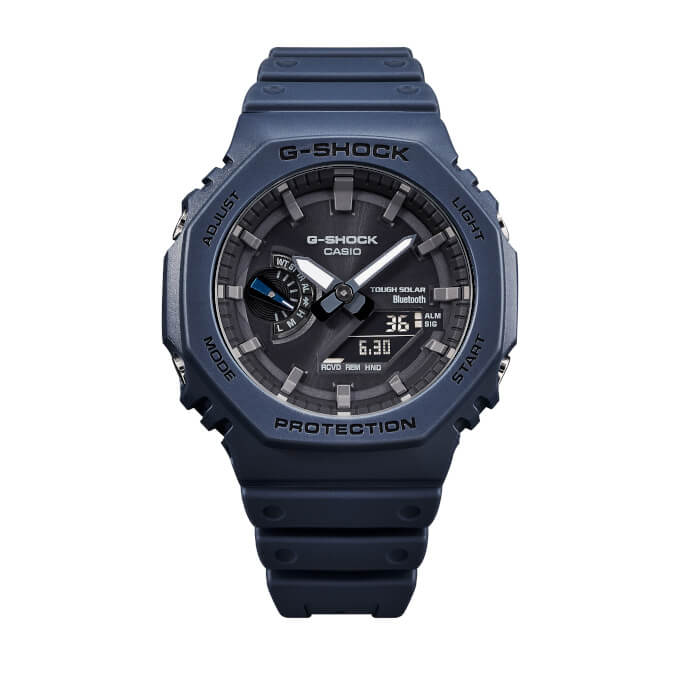 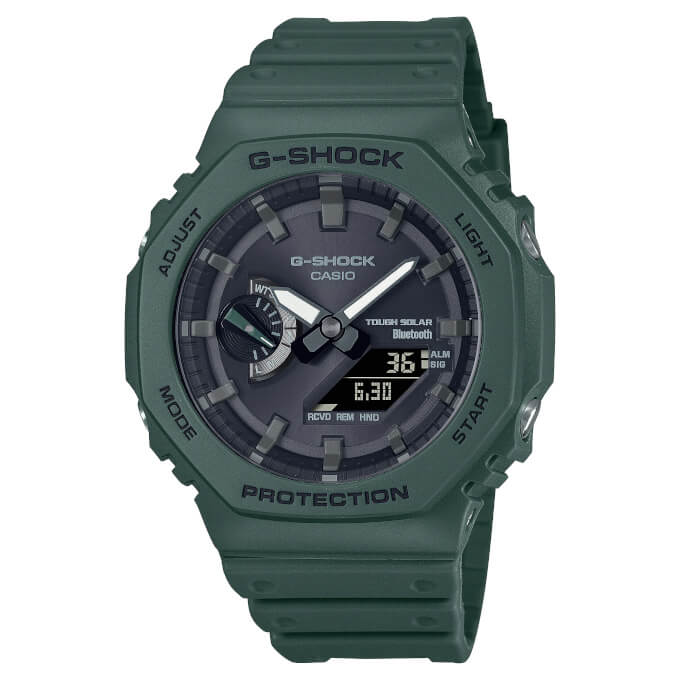 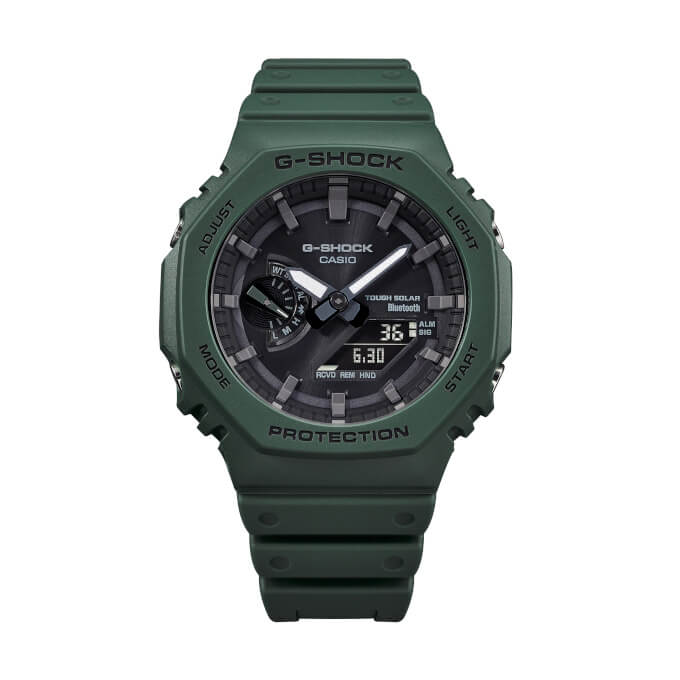 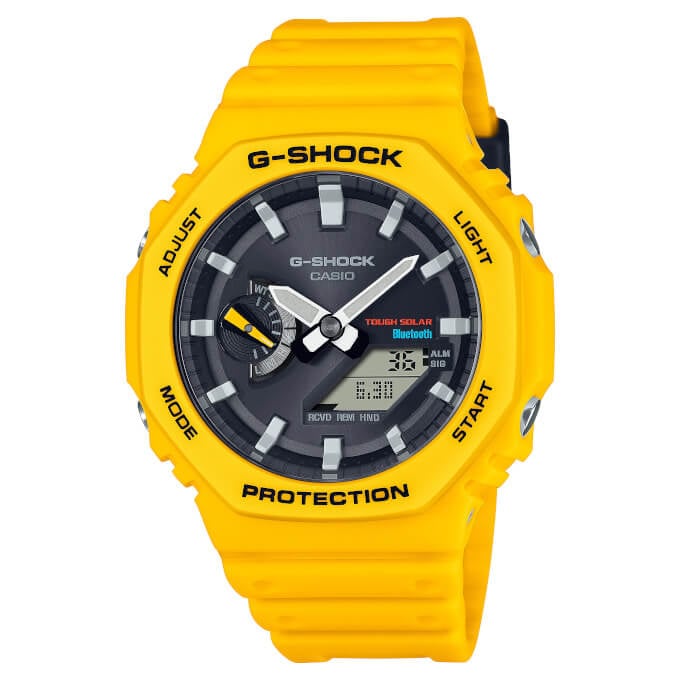 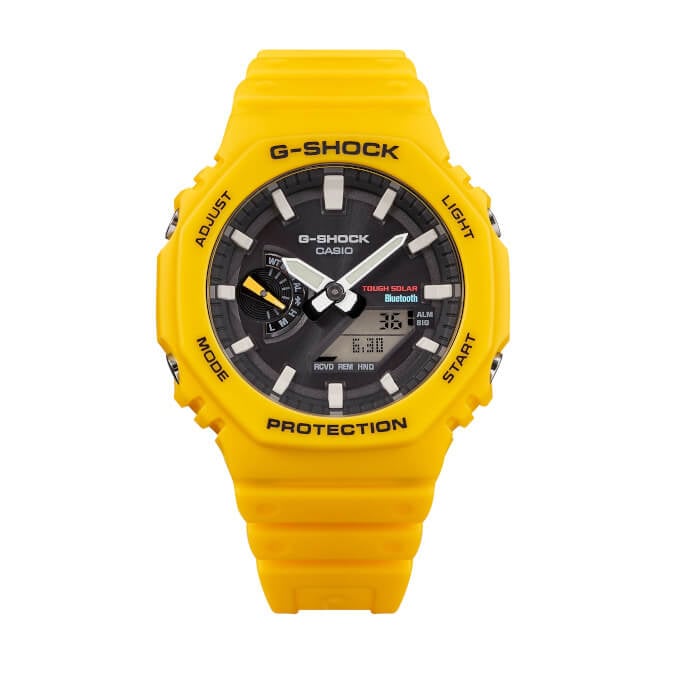 Finally a version with tough solar and positive display. nice!

Not even mad that they don’t have power save, auto backlight, portuguese for the date and we have to pick between day or date, if these come at 120 to 150 euro, they are awesome!!

But when in Germany?

It also has a 60min timer instead of 24h.. G-shock always do those kind of omissions. They leave something to be desired… It’s good that the price is reasonable and the looks are awesome!!

Am I the only one that think Bluetooth on this model is a negative??

Nope, would rather see atomic time keeping vs bluetooth.

I also don’t like the fact that Bluetooth is on board. Is this radio always active on such G-Shock devices with Bluetooth or can you turn it off?

I like it when a watch is self-sufficient and no connection to the cell phone.

You can turn it off and you don’t need to use Bluetooth to use the watch, but there are some optional features that require Bluetooth.

Hello G-Central folks, is Bluetooth becoming more and more common? It feels like every new G-Shock or Casio watch that comes out is equipped with Bluetooth instead of aligning with an atomic watch.

Do you see it similarly or is it just a current trend?

Yes it’s more common now, but there are still models with Multi-Band 6 radio time sync and some with both Bluetooth and Multi-Band 6.

I am holding out for the metal versions.

great watch – have it on my wrist right now. only problem is the mobile app has not been updated for it yet so no way to sync with phone.