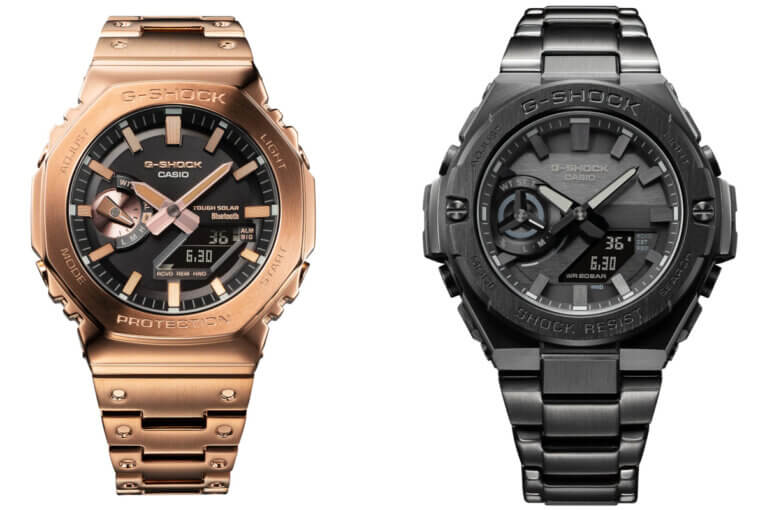 According to Casio.com, the rose gold G-Shock GM-B2100GD-5AJF and black GST-B500BD-1AJF have ended production and are discontinued in Japan. This usually means that they will be discontinued in other countries as well.

Previous reports indicated that the GM-B2100GD-5A, which was advertised as rose gold but is more of a brownish copper-like color instead of the usual pink rose gold, was expected to be discontinued. We hope to see a traditional yellow gold GM-B2100 model sometime this year, but nothing has been confirmed yet.

At 12.8 millimeters, the GST-B500BD-1A was one of the thinner options for a black ion plated metallic G-Shock with an analog display. Similar all-black alternatives include the full metal GM-B2100BD-1A (12.8 mm) and the pricier full analog MTG-B3000B-1A (12.1 mm). Both of these models are equipped with Tough Solar power and Bluetooth smartphone link like the GST-B500BD-1A.

Mid-Size Black-Gold, Silver G-STEEL with Tough Leather
Disclosure: G-Central is managed by fans and supported by ads. We may earn a commission on purchases from our links to Amazon, eBay, and Reeds Jewelers. Please follow your country's official G-Shock site for additional release information.

I may do like I did with the desert Mudman and get the “whatever it is gold” model while possible. I actually like how they are almost randomly creating lasting value in the watches and their brand with this strategy. I’m not sure what the intent or purpose is, but to me it means run of the mill G Shocks can become collectible. Off hand I can’t think of another brand doing that, although Seiko seems to stumble through a situation or two just seemingly by dumb luck.

Regardless, I think I’m in. I’ve seen these go for up to 40% off. The search begins…