Like G-Shock, Baby-G Japan has its own “U” line of updated classic digital models with the square BGD-5000U and round-face BGD-5700U series. Although these are Japan-only models, there are some reasons why it might be worth importing. The BGD-5000U has Tough Solar power, which most Baby-G watches sold outside of Japan do not have (an exception to this is the G-MS line). It also has radio-powered automatic time adjustment, and although it is a Japan-only model, the Multi-Band 6 feature also works in other countries that are within the range of one of the six radio transmitters located in North America, Europe, China, and Japan. Also, there are many unisex-style colors available for the BGD-5000U, which is not always the case with international Baby-G models.

The upgrades are similar to the G-Shock U Series and include 5 world time settings with home time swap, LED backlight with adjustable afterglow (1.5 or 3 seconds), date format adjustment (MM/DD or DD/MM), and six language options for the day of week display (English, Spanish, French, German, Italian, and Russian). The watch also has a 1/100-second stopwatch (for less than 1 hour, 1-second for an hour or more), 24 hour countdown timer (settable in seconds), and 5 alarms with 1 snooze. Like the G-Shock U models, the current time is shown in stopwatch and timer modes, and holding the mode (bottom-left) button for more than one second will quickly return to timekeeping mode without having to make multiple presses. BGD-5000U models have a tax-included list price of 19,800 yen. (The BGD-5000UMD-1JF is 20,900 yen.) There is also the BGD-5700U series with the same module and featuring a round face. Models include the black BGD-5700U-1BJF and white BGD-5700U-7BJF for 19,800 yen each. There is no English manual for module 3493, but it’s possible to use Chrome’s translate feature with the Japanese HTML instructions. 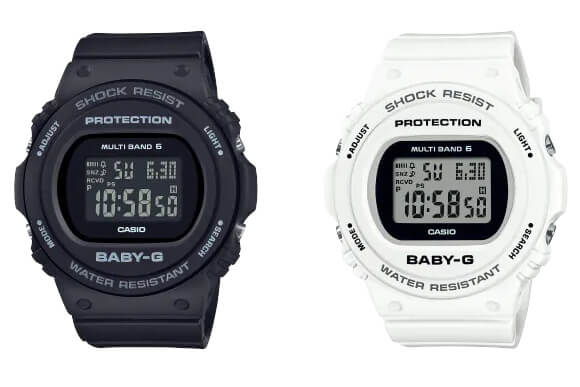 G-Shock & Baby-G Purple-Pink Throwback 1990s Series
Disclosure: G-Central is managed by fans and supported by ads. We may earn a commission on purchases from our links to Amazon, eBay, and Reeds Jewelers. Please follow your country's official G-Shock site for additional release information.