G-Shock at Vans US Open of Surfing in Huntington Beach 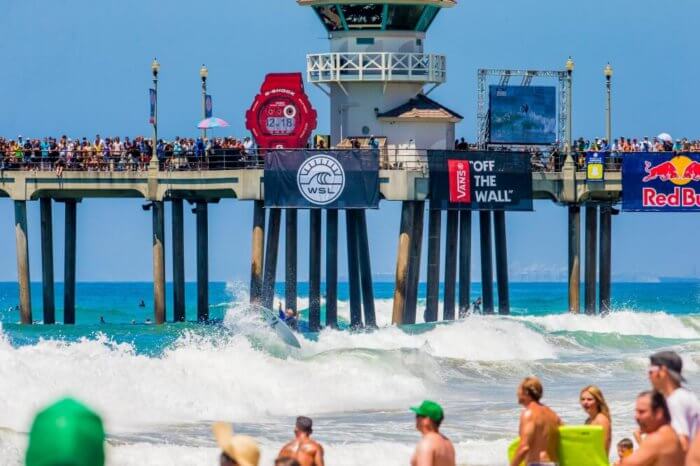 G-Shock will have a large presence at the 2015 Vans U.S. Open of Surfing in Huntington Beach, California, with the official timer being a giant red G-Shock on the pier. There will also be a G-Shock booth with product displays showcasing the Master of G series, Heathered Series, Neo-Metallic Series, the Floral Series and Gold Series from the G-Shock S Series, and the Baby-G Sneaker Color Series and Tide Graph Series. Visitors will have a chance to play the “Tough Toss Game” where they can win G-Shock swag like bags, t-shirts, posters, and also G-Shock watches at select times.

Several G-Shock and Baby-G athletes will be competing at the event including surfers Yadin Nicol, Adriano de Souza, Alejo Muniz, Malia Manuel, and skaters Pedro Barros and Lizzie Armanto. The athletes will be signing autographs at the G-Shock booth from Thursday, July 30th to Sunday, August 2nd at select times.

The U.S. Open of Surfing includes surfing, skating, and BMX competitions. The event runs from July 25 to August 2 and is open to the public free of charge.

G-Shock and Baby-G Love The Sea And The Earth 2022: ICERC GWX-8904K-7 & BGR-3000UK-7, Aqua Planet BGA-280AP-7A
Disclosure: G-Central is managed by fans and supported by ads. We may earn a commission on purchases from our links to Amazon, eBay, and Reeds Jewelers. Please follow your country's official G-Shock site for additional release information.