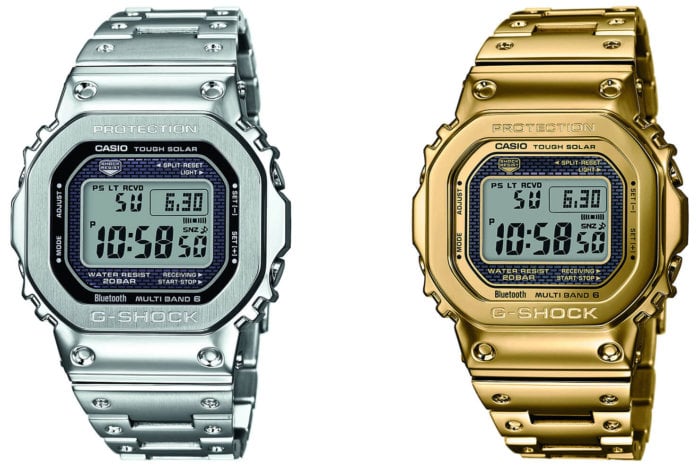 The previously rumored silver stainless steel G-Shock GMW-B5000D-1 and gold ion-plated G-Shock GMW-B5000TFG-9 are now officially confirmed and will be released on April 13, 2018 in Japan. These watches are the first “full metal” 5000-series models and feature a stainless steel exterior and inner case, screw-lock case back (with DLC coating), Tough Solar power, Multi-Band 6 radio timekeeping, STN LCD display, and Bluetooth mobile link connectivity. The GMW-B5000 series merges the original G-Shock design with a full-metal exterior and today’s technology, making it one of the biggest G-Shock releases of the year.

The GMW-B5000 utilizes fine resin between the exterior and interior cases for full shock resistance and is water-resistant to 200 meters. Unlike other 5000-series models, the day of the week can be presented in six languages (English, Spanish, French, German, Italian, Russian) and the numerical date can be adjusted to either a Month/Day or Day/Month style. 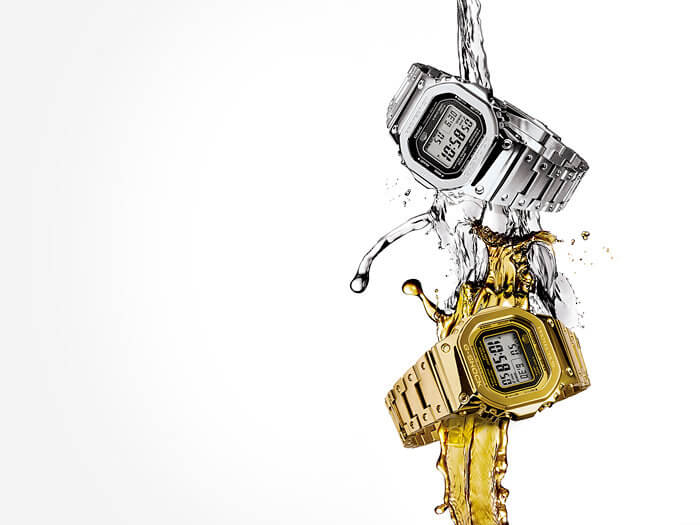 With a Bluetooth connection to a smartphone, the watch can automatically sync with internet time servers 4 times a day and automatically update daylight saving time and time zones. A reminder application provides flash alerts for up to five dates. The phone finder function will locate a missing phone by connecting to it with Bluetooth when it’s within range and emitting a sound. The time and place feature functions like a flight log and records the time and location points (longitude/latitude coordinates) with the press of a watch button, then displays the log data on a map in the smartphone app. Supported mobile phones include iOS 10 or higher and Android 6.0 or higher.

One of the rumored features was a sapphire crystal but that turned out to be false as these models use mineral glass. The super-twisted nematic (STN) LCD display is an upgrade over the standard LCD displays of other 5000-series watches and provides improved contrast and readability especially when viewed at an angle. 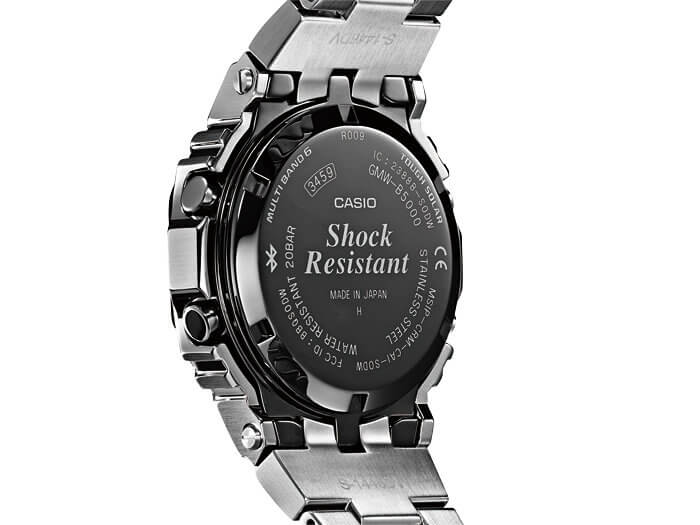 The gold GMW-B5000TFG-9 has a 35th Anniversary case back and is presented in an anniversary box while the silver GMW-B5000D-1 has the Shock Resistant-labeled case back similar to the original DW-5000C and the current GW-5000-1JF. Both models have a DLC coating on the case back. The Japanese model numbers indicate the silver GMW-B5000D-1JF is a standard release while the gold GMW-B5000TFG-9JR is a limited edition model.

Possibly replacing the DW-5750 revival as the most surprising release of the year, the G-Shock GMW-B5000 series features metal bezels and bands with the classic square shape plus a sapphire crystal, Tough Solar, Multi-Band 6, and Bluetooth V4.1 connectivity. Reminiscent of the solid gold Dream Project concept watch, the GMW-B5000 has two variants: the silver GMW-B5000D-1 and gold GMW-B5000TFG-9. We don’t have any official information from Casio yet but have heard that the watches are made of stainless steel with a price of around €500 EUR for the silver model and €600 EUR for the gold model.

It is believed that the GMW-B5000 has a full stainless steel housing and screw-back case like the GW-5000-1JF. A European distribution site states that it has a phone finder and flight log memory functions, as well as the usual features like world time, stopwatch, timer, and 5 alarms. It is fully shock-resistant and water-resistant to 200 meters. Unlike most 5000-5600 models, it has an LED light instead of the EL backlight.

The solar panels on the face have a brick pattern that is reminiscent of the first-ever G-Shock DW-5000 and previous DW-5000 anniversary tribute models. This is the first time this brick pattern has appeared on a solar model.

The silver version seems to have a chrome finish on the housing, and another finish on the bracelet. If that is the case, they really screwed this up bad. To different finishes like that on a steel watch? That’s a no no. Also the fact they skimped out on the sapphire is a big mystery to me. All steel construction and sapphire crystal would put it up there with luxury brands. Now it’s just another square G.
I really hope I am wrong about the finish on the silver version, because that will surely look shitty, judging by the pictures.
I will add, that this watch, in an all polished finish (no chrome), with a sapphire, would have been an instant buy for me, even at twice the price.

Can you explain why chrome would be bad? I would have liked to see a full DLC version.

hello thx but where is the battery L H M ??

Will the alarm and hourly chome be louder?
Hope so

extremely low chime you can’t even hear it

“extremely low chime you can’t even hear it”
That’s very, very bad. Extremely disappointed and didn’t expect such a fail from Casio. Stopped to consider this watch just because of this. Otherwise they could be ideal for me.

Yes, those are the main differences. The gold IP is the same. Another difference is that the bezel on the GMW-B5000GD-9 has a brushed finish (like the GMW-B5000D-1, but with gold IP over it), which gives it more of a textured and less glossy appearance than the GMW-B5000TFG-9. Also, the GMW-B5000TFG-9 sold out long ago, so you will not find it available for the list price.

Was there ever any information on the actual amount of GMW-B5000TGF-9 were produced? I see a lot of the “GD-9”s on IG but rarely do I see a “TGF-9”

That information was not publicly released, but they did sell out quickly.