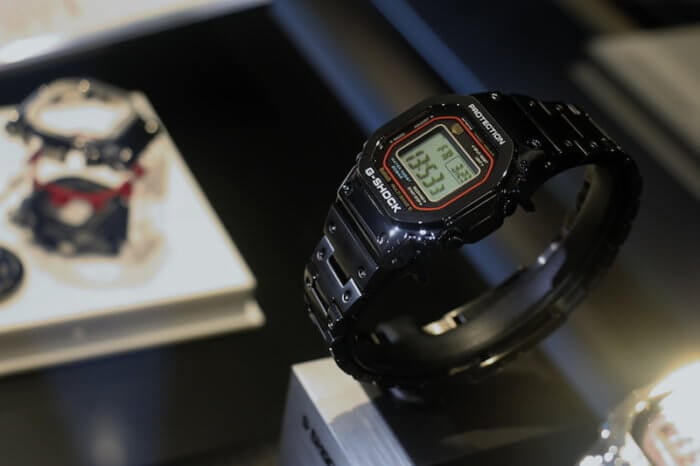 We were hoping for a full DLC-coated version of the full-metal GMW-B5000 and here it is, the G-Shock GMW-B5000TFC-1, a 35th Anniversary edition presented in collaboration with Japanese luggage-maker Yoshida & Co., the maker of Porter bags. The GMW-B5000TFC-1 features the traditional colors of the original G-Shock DW-5000C-1A with a red ring around the display and has a DLC (diamond-like carbon) coating on the bezel and bands. The watch also has the 35th Anniversary logo inscribed on the case back and is reportedly limited to 500 units worldwide. The watch comes in a specially designed Porter bag that can also serve as a display case with four other watches. With its strong resemblance to the DW-5000C-1A but in a full-metal, DLC-coated form with modern features, the GMW-B5000TFC-1 is likely to be the most desired and hard-to-find of the GMW-B5000 models but will also be the most expensive (with a rumored price of $1,200 USD).

The GMW-B5000TFC-1 is based on the GMW-B5000, a completely new model for 2018 and the first-ever full-metal 5000-series G-Shock. In addition to the usual shock resistance and 200-meter water resistance, features include Tough Solar, Multi-Band 6, Bluetooth mobile link, STN LCD display, world time, stopwatch, countdown timer (24 hours), 5 alarms with 1 snooze alarm, and full auto Super Illuminator LED light. The mobile link feature allows automatic time syncing along with DST and time zone adjustment, Time & Place log (that records date, time, and longitude/latitude coordinates), and Reminder alerts (for up to 5 reminders with date and title which flashes the display on the set date). The GMW-B5000TFC-1 measures 49.3 x 43.2 x 13.0 mm and weighs about 167 grams. 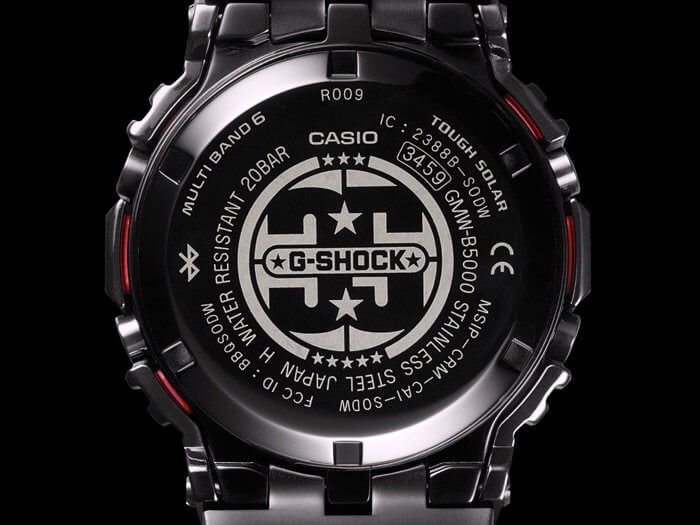 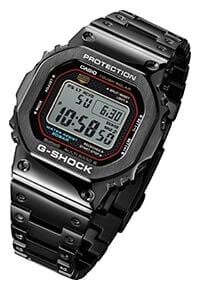 G-Shock 35th Anniversary Red Out Photo Shoot
Disclosure: G-Central is managed by fans and supported by ads. We may earn a commission on purchases from our links to Amazon, eBay, and Reeds Jewelers. Please follow your country's official G-Shock site for additional release information.