The MR-G “The Origin” MRG-B5000 series was reportedly planned for a November 2021 release, but apparently it has been postponed. We’ve seen what appears to be the final November 2021 G-Shock lineup for Japan, and it does not include the MRG-B5000. There was never an official announcement for a release date, so we don’t technically consider this a delay, and we continue to wait for more information.

Here is what we know and don’t know so far about the MRG-B5000. Please keep in mind that “known” does not mean it has been officially confirmed, but that we are confident that the available information is accurate. 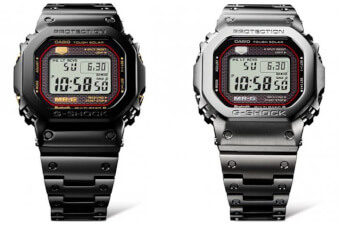 Build: The MRG-B5000 is made of titanium, which is a signature trait of the MR-G line. Early rumors stated that it is TranTixxii titanium, and Horloge.nl lists the MRG-B5000B-1DR and MRG-B5000D-1DR as “TranTixxii titanium case G-Shock.” There are also rumors that the bezel is made of the Cobarion metal alloy, which is about four times harder than pure titanium and was previously seen on the MRG-B2000BS-3A Hana-Basara Edition. Horloge.nl also states that the watches have a sapphire glass display, which was expected.

Leaked images also show that the watch has a multipiece bezel with sides that are separate from the front, unlike the single-piece bezel of the GMW-B5000. While there doesn’t seem to be much of a reason for using a multipiece bezel in the two single-color launch models, it does open up the possibility for future models to use a front bezel with a different color, material, or finish than the sides.

Features: The MRG-B5000 has Tough Solar power, Bluetooth smartphone link, and Multi-Band 6 radio wave time syncing. There is no indication that it has GPS timekeeping like some previous MR-G models.

Module: We don’t know if the MRG-B5000 uses the same Module 3459 as the GMW-B5000, or if it is an all-new module. There are rumors that it is a new module, but a new module doesn’t necessarily mean new features. The layout of the LCD display appears to be the same as the GMW-B5000. (Update: A photo of the case back confirms that the watch uses Module 3501.)

Limited Edition Status: We don’t know if the two launch models are designated as limited editions. Even if we knew the Japanese models names (and if they end in “JF” or “JR”), that is not a clear indicator for MR-G models like it is with some other models, as there are many older MR-G “JR” models that are still in production and appear to be indefinitely long-running models, like the MRG-G1000B-1AJR.

Water Resistance Level: Unlike the GMW-B5000, the MR-G logo on the MRG-B5000 eliminates the space for the water resistance specification that is seen on the GMW-B5000. Could it be greater than 200 meters (20 bar)? (Update: A photo of the case back confirms that the watch is water-resistant to 200 meters.)

Dimensions and Weight: In the prototype photos, the case appeared to be a lot thicker on the MRG-B5000 than the GMW-B5000, but we do not know exactly how much thicker it is, or why.

Why was the “Titanium” label removed?: The prototype photos showed that the watch had the “Titanium” label on the upper-right face, like GMW-B5000T titanium models, but the latest product images show that it has been replaced with the “Tough Solar” label. We believe that the watches are still made of titanium, and perhaps the titanium label was removed because MR-G models are already known to be made of titanium and Casio simply wanted to emphasize the Tough Solar feature instead.

Release Date: While it might just be pushed back a month or so, December isn’t usually a month that sees major new releases, as the time it takes to distribute new models worldwide often goes into the following month (making October and November the big release months). Also, January typically isn’t a month that sees major all-new models released, but we wouldn’t rule it out completely. We don’t know the reason for the rescheduling, and it appears that some other models have also been postponed, so we’ll just have to wait see what happens.

MRG-B5000B-1DR coming soon to G-Shock U.K., pre-orders for both MRG-B5000 models in Australia and New Zealand

This should have a MIP screen, like the the gbx-100.