Japanese fan blog Great G-Shock World reported on the discovery of an upcoming G-Shock MRG-B5000. The original source was not revealed, but it will reportedly cost at least 300,000 yen and will likely be the highlight model of the 40th anniversary in 2023.

(Update: Great G-Shock World reported that MRG-B5000 will launch in August or September 2021. The source of this information is not official, but GGW believes it is a reliable source.)

The MR-G series is the top of the G-Shock lineup and features watches made of a specially treated and hardened titanium. Though early models included all-digital displays, it is now a luxury analog line. The MRG-B5000 will presumably be a return to an all-digital display.

Keep in mind that we do not know the certainty of this watch being released or the reliability of the original source.

Update: Great G-Shock World later reported on rumors that the MRG-B5000 will use the same TranTixxii titanium alloy as the GMW-B5000TR-9 and will also have a multi-color design like that model. Again, we have no idea how accurate or reliable this information is. 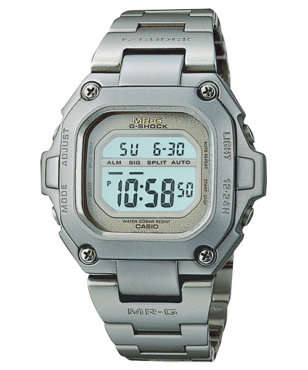 New G-Shock MRG-B2000 for 2022: Akazonae MRG-B2000B-1A4, Basic Black MRG-B2000B-1A1, Silver-Black MRG-B2000D-1A
Disclosure: G-Central is managed by fans and supported by ads. We may earn a commission on purchases from our links to Amazon, eBay, and Reeds Jewelers. Please follow your country's official G-Shock site for additional release information.