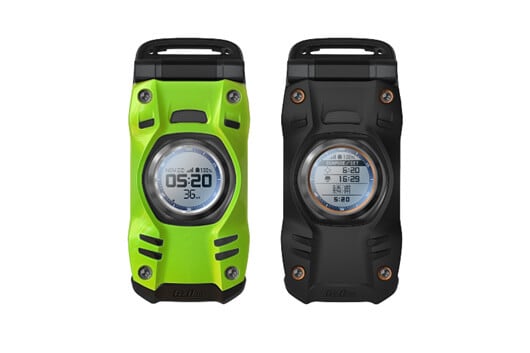 The G-Shock-like Casio G’zOne, active from 2000-2012, was a series of rugged, water-resistant phones designed for the outdoors. To commemorate the G’zOne 20th anniversary, Casio is reviving the line with the newly designed G’zOne TYPE-XX. The phone will be available in Japan through KDDI and Okinawa Cellular, in a liquid green color or solid black. Pre-orders begin on August 3, with a release on November 13, 2021. It’s not known if the Type-XX, manufactured by Kyocera, will ever be available outside of Japan.

The new G’zOne is compliant with 19 items of U.S. MIL-STD stress-testing standards and is drop-tested to withstand a fall of 1.8 meters. The phone has four sensors, including an atmospheric pressure sensor and thermometer. Full specifications and other information are coming soon to the official site at www.au.com/pr/gzone (Japanese), which also has a history timeline of past G’zOne models.