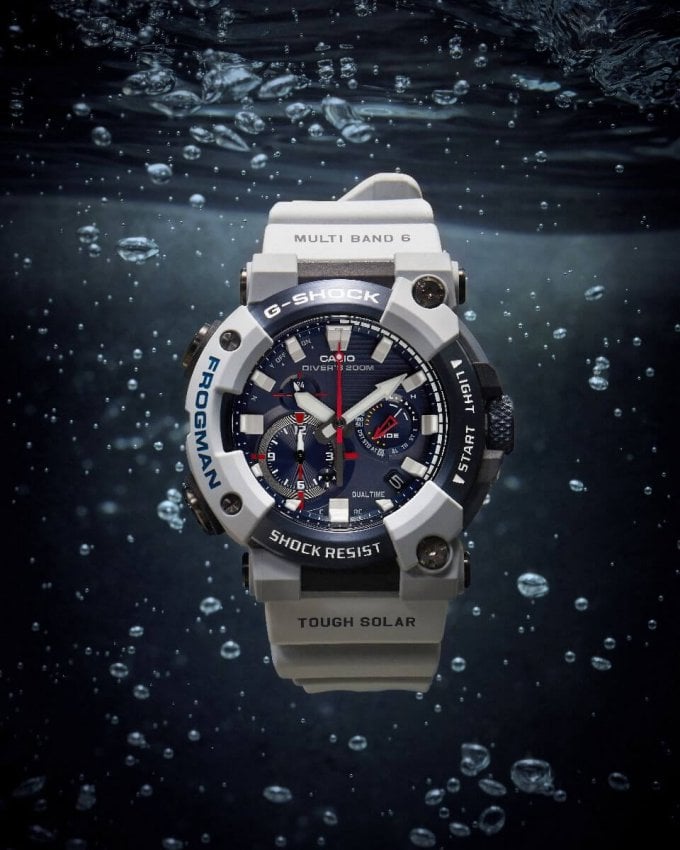 Most Recent Update: G-Shock.co.uk has the GWF-A1000RN-8AER listed as coming soon with a price of £799. A special page for the collaboration is now at g-shock.co.uk/navy.

The bezel bumpers and band are gray, with the bumpers appearing to be darker than the band, and the stainless steel bezel, electronic crown, buckle, and band keeper have a deep navy blue ion plating. The blue dial has red accents like the Royal Navy flag, and the front screws and other metal parts have a black ion plating. The keeper also has the Royal Navy logo printed on it, and the case back has a custom graphic featuring the Frogman mascot holding an anchor. The colorway is modeled after the HMS Queen Elizabeth aircraft carrier.

(The final design is somewhat different than the previously leaked image, as the previous image had a black IP rather than blue, black dial, darker non-white G-Shock and Shock Resist logos, and silver electronic crown.)

The GWF-A1000RN-8AER will reportedly be released in the U.K. in April 2021, with other regions expected to follow.

Update 2: G-Shock U.K. is releasing the GWF-A1000RN-8AER on April 7 for £799, with early access available to those who sign up for email notifications. 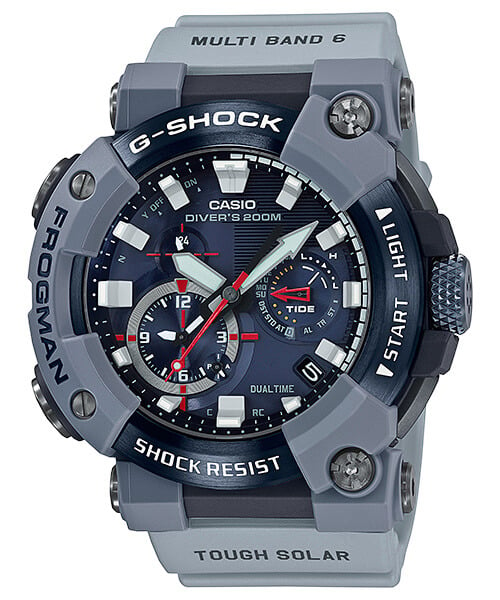 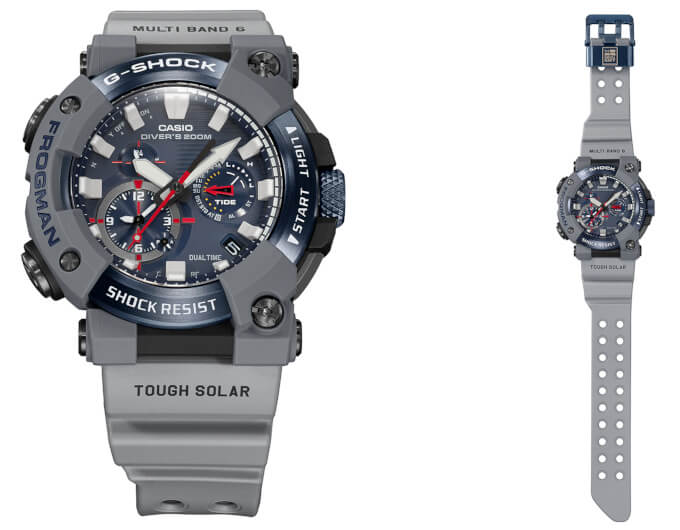 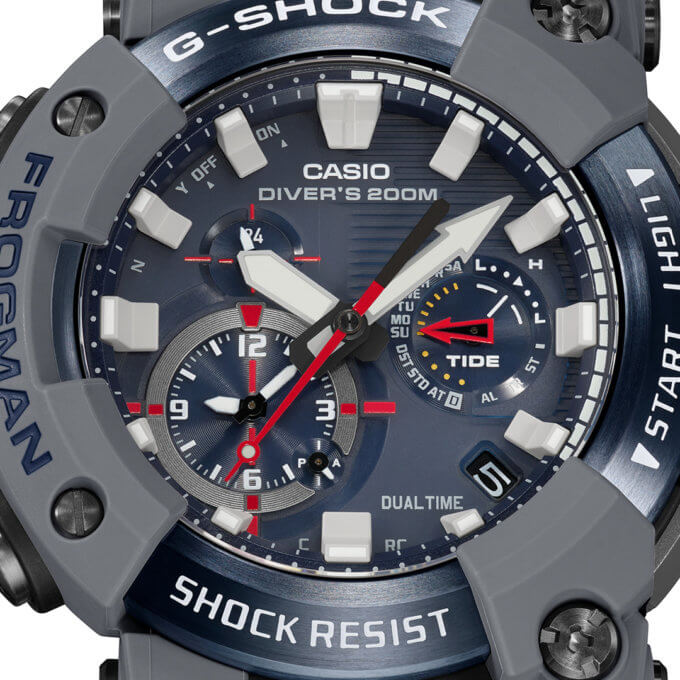 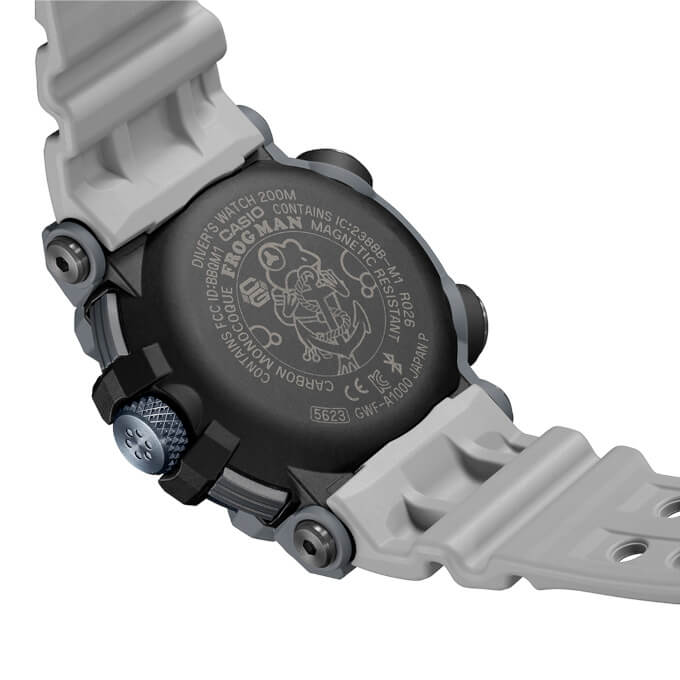 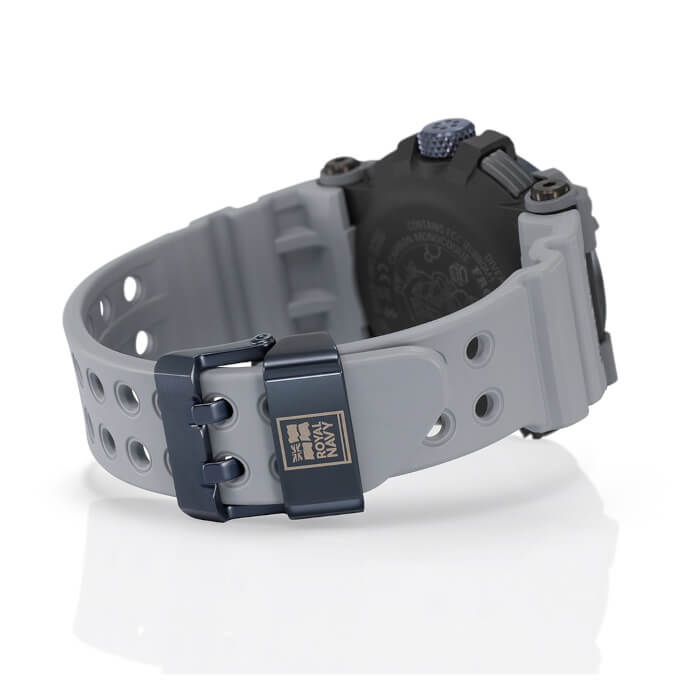 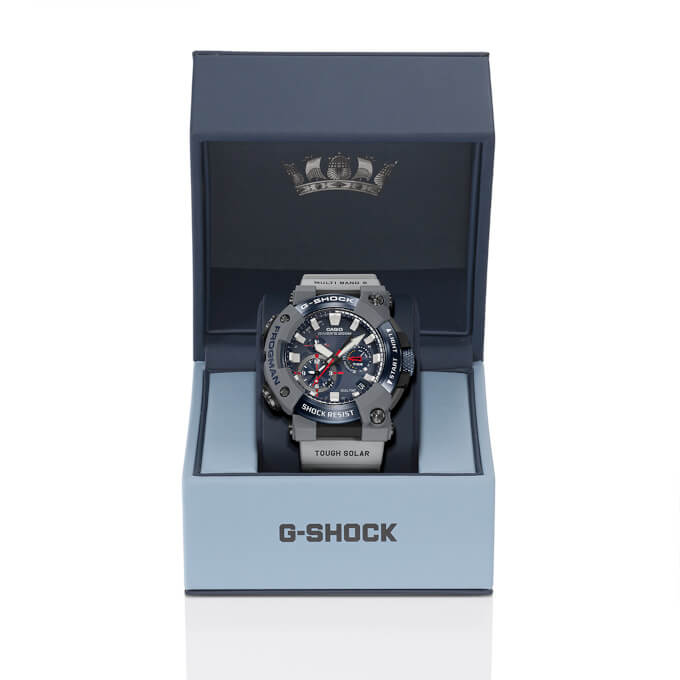 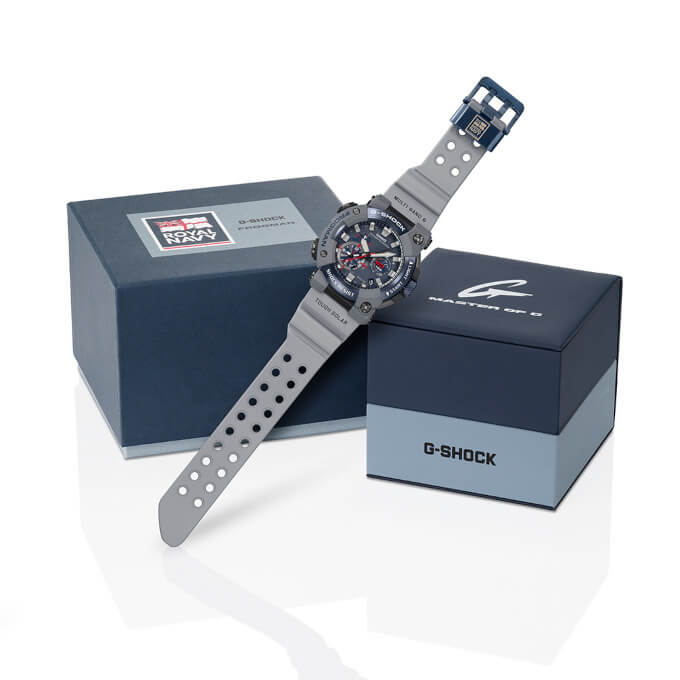 Spanish watch site Relojes Made In Japan posted a prank photo on December 28 (Day of the Holy Innocents, which is like an April Fool’s Day in Spain) that made the rounds on social media. It then posted an image of what is purported to be the real GWF-A1000RN-8A. We do not know the original source of the image, but it appears to be from Casio, and based on the unfolding of events, we have no reason to believe that it isn’t legit. We still don’t know the release date, but according to Relojes Made In Japan, it could be May 2021. (Update: The final appearance of the watch was a little different than that image.)

Japanese fan blog Great G-Shock World discovered a listing for the G-Shock Frogman GWF-A1000RN-8A. (It was listed as the GWF-A1000RN-8AER on an official European distributor site, but that page now shows a 404 error). The GWF-A1000RN-8A is expected to be a collaboration with the Royal Navy and the third and final watch in a collaborative series with the United Kingdom’s Ministry of Defence that began in 2020. (The first watch was the British Army x Mudmaster GG-B100BA-1A, and the second was the Royal Air Force x Gravitymaster GR-B200RAF-8A.

The Diver’s 200M ISO-certified Frogman GWF-A1000 series made its debut in June 2020. It is the first Frogman watch with an analog display and a carbon monocoque case back.

The “8” in the model name signifies a gray color, and that’s all we know about the design so far. No images are available yet, and we will update this page when they are.

G-Shock GWF-D1000JCG-9JR Frogman for Japan Coast Guard 70th Anniversary
Disclosure: G-Central is managed by fans and supported by ads. We may earn a commission on purchases from our links to Amazon, eBay, and Reeds Jewelers. Please follow your country's official G-Shock site for additional release information.